If you’re going to compete with Apple and Samsung in the cellphone market, your product is gonna have to be damn good. The Xiaomi 11T Pro holds its own against the big boys, who must be — if they are doing their homework — getting pretty worried about this relatively new kid on the block.

One indication that the 11T Pro is hitting the consumer sweet spot is that when I checked to see what this model is going for on Takealot, it was unavailable; it was sold out … out of stock. My initial guess was that this is because, as usual, Xiaomi has created another top of the range smartphone that doesn’t set you back an arm and a leg. But then I learned that the company only produces limited quantities of each product during its initial launch. This helps the company control inventory, and gradually ramp up production when component costs fall over time.

A pleasant surprise was finding a protective cover in the box the phone arrived in. You’d think that for anything over a few thousand rand that manufacturers would always include little perks like this as bonus incentives, but it’s the first phone I’ve found with this welcome addition (Apple phones arrive without even a charger).

With a length of 164mm and a width of almost 80mm, it’s a big phone, larger than the Samsung Galaxy A31 I was using, and far bigger than the iPhone 13 mini that my wife recently acquired, though the Apple feels thicker when it’s in a cover, and it’s cameras protrude more. If you go with the 11T Pro, you’ll have the advantage of seeing your photos, videos and documents on a larger screen, but will have to live with an uncomfortable, protruding lump in your pocket. You can’t have everything in this life!

Another cool treat was to discover that the phone was already charged when I turned it on. The charger is about five times the size of most, but that’s because Xiaomi is hoping to get the edge on fast charging — it claims that the 11T Pro will be fully charged in just 17 minutes. Charging really is a whizz: you can see the phone charge up by the second. On a short business trip, you could feasibly leave the large charger at home, and there’s all sorts of impressive new cooling technologies that prevent the phone’s twin 2 500mAh batteries from overheating.

At one point I left the phone on for a week, though I didn’t use it much in that time, but Xiaomi claims that even with regular usage, the battery lasts for more than four days; enough to fly to New Zealand and back without plugging in. You can watch videos continuously for almost an entire day (23 hours) or chat to even your most verbose relatives until they pass out (30 hours). Generally, you get a feeling that this phone is pretty much always charged, and it helps that the phone provides ample warning when it gets below 20%.

The battery itself has about the same lifespan as the iPhone 13’s (about two years before it goes down to 80%) but the cable connecting the phone to the charger is considerably more robust. At a stretch, you could describe it as “chunky” … it looks as if it will last decades, though doubtless most owners will feel the need to upgrade by then. Overall, just opening the box, sorting through the components and activating the device conveys the impression that this phone has quality and endurance. The AMOLED screen manufactured from Gorilla Glass Victus also has a six-month warranty, adding extra peace of mind.

The first thing I wanted to test was the camera. The main camera module has a 108MP sensor in the primary module, which is accompanied by an 8MP ultra-wide camera and a tele-macro. The colours take a bit of getting used to, as it seems the manufacturers have pushed the saturation up, so they are not quite as “real” as the iPhone 13’s. I prefer to have a more plain image that I can then ramp the colours up on, rather than starting out with bright hues, but then again, many phone users never put their images onto a computer, and there’s always the filters on the 11T Pro if you want to alter the ambience you want on your photos. 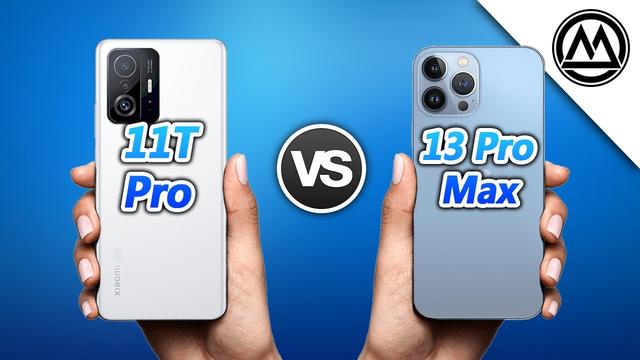 I was amazed by how far you can zoom into an image — on a computer or on the phone itself — before any pixelation becomes apparent. Smartphones of this calibre are literally making SLRs redundant: they shoot really high quality images and are a fraction of a camera’s size. The macro is quite handy, but I struggled to get the focus point where I wanted it. The “night” feature ensures that you can shoot pictures even when the sun has set. In fact, if you can’t see what’s going on in a dark place, and you don’t feel like using the phone’s powerful torch or flash, you can quietly take a photo and then look at the image to see the details that your eye can’t. The “portrait” feature works okay on the 11T Pro, but the blur on the background is more pronounced on the iPhone 13.

The storage (256GB) and RAM (8GB) are impressive, which means even the most demanding games run smoothly, and you can shoot videos till the cows come home without worrying about getting that dreaded warning that your phone’s storage capacity is reaching its limit. The video images are, like the still images, in brightly contrasting colours, and the stereo sound (with Dolby) is a great bonus. There’s plenty of bass in the sound, so you don’t have to link up to a speaker if you want to play tunes while you wash the dishes, but the iPhone 13 does have slightly louder playback.

It’s quite easy to find your way around the phone, as the interface is somewhere between Android and Apple, according to my wife. I struggled to transfer my private information from my Samsung to the 11T Pro, as the app that I’ve used for this before (Smart Switch) didn’t work, and my wife said she had the same problem going from Samsung to Apple. I’m a bit of a techno-peasant, but a cursory search on Google revealed that there are indeed many other ways to move your data, such as Mi Mover.

A review by Andrew Williams on trustedreviews.com sums up the 11T Pro pretty well by stating: “The most compelling Xiaomi phones offer a taste of the flagship phone experience for much less money. The Xiaomi 11T Pro is more like a OnePlus phone, in that it tries to offer 90% of what the most expensive phones include, at perhaps 60% of the cost. A Snapdragon 888 CPU is the most important change over the cheaper Xiaomi models, but the 120W charging also deserves a mention.”

I think Williams is right on the money. While the iPhone 13 retails at around R20 000 in South Africa, the 11T Pro goes for R14 000, and they pretty much match up on performance. Go figure. — Derek Davey

Xiaomi? Who and what

In just three decades, the percentage of the population that owns mobile phones has gone from almost zero to 83%. About 6.4-billion people are now in constant contact with their loved ones, and about 1.5-billion cell phones are sold each year. Samsung, which dominates the market, shipped 315-million units last year, with Apple about a million units behind that. Xiaomi is one of the largest smartphone makers in the world, with considerable market share of worldwide smartphone shipments.

Pronounced “Shahmi”, Xiaomi, which means “little rice” is now one of the largest smartphone companies out there. It began in 2010 in Beijing, China as a software company, creating a new custom ROM based on Google’s Android. With its additional functionality and easy-to-use user interface, MIUI became a huge success and by the end of 2013 there were over 30 million MIUI users across the globe. In 2011 Xiaomi brought out the Mi One phone, which had top specs and a great price; selling its products at only slightly more than it costs to make them has been the company’s philosophy from the beginning. Its affordable Redmi range soon made it China’s top selling smartphone.

Xiaomi’s dynamic founder Lei Jun has often been compared to Steve Jobs, and the company has often been called “China’s Apple”, as they both have an extremely strong fan base. Lei did read a book on Jobs while studying and he does have a similar stage presence, but he prefers his company to be compared to Amazon rather than Apple. It is growing so fast that it may soon overtake both. He seems to have the Midas touch: before creating Xiaomi Lei worked his way up to CEO in software company Kingsoft, founded ecommerce company Joyo.com (since acquired by Amazon, it is now Amazon China) and invested in social network YY.com; like Xiaomi, they are all now mega companies.

Today Xiaomi also makes more than 2 000 smart home products such as TVs, laptops, fitness bands, e-scooters and water purifiers. While the iPhone 13’s 178 components are manufactured in a number of different countries, including the US, Japan and Germany (it’s assembled in China), and the Samsung S20 is mostly made in Vietnam, (the company also has plants in Korea, India and Brazil), Xiaomi now makes many of its products in India, although most components are still made in China. The colourful Manu Jain, Indian head of Xiaomi, was the company’s first employee in that country; he’s now a renowned influencer, who has stamped himself and the brand indelibly on the Indian map (it’s the top selling phone in India since 2019).

Jain’s first tactic was to sell Xiaomi online at a time when online sales were still tiny in the country; next he employed clever sales tactics such as “hunger marketing”; then he pushed deep into rural areas, setting a world record by opening 500 stores a day. He also tailored the Android-based system to the local market. In a 2017 TEDx Talk, he outlined that it’s not advertising that the most successful companies in the world rely upon; rather, it’s a great product, influencers — especially your relatives — and a deep understanding of what the customer wants. These are tactics that Xiaomi has always relied upon; it cleverly draws on its fan base when creating new products, asking its loyal fans what it is they want next.

Xiaomi entered the prepaid South African market six years ago and is now also targeting the lucrative postpaid smartphone market; it signed a distribution agreement with Vodacom in November 2020 and plans to open its Mi Stores soon. As always, the company aims to sell its quality phones at accessible prices, and as its products often have higher specs at better prices than the competition’s, it stands a good chance of grabbing a large chunk of the lucrative local market. You can now buy Xiaomi products from official partners in South Africa like HiFiCorp, Takealot.com, and Incredible Connection. — Derek Davey