Belkin’s Wemo Wi-Fi Smart Outdoor Plug ($39.99) is a dual-outlet smart plug designed to withstand the elements. It’s easy to install, it responds to Alexa, Google, and Siri voice commands, and it supports Apple HomeKit and IFTTT, so it works with lots of other smart home devices. The plug worked well in testing, but it's disappointing that the two outlets can't be controlled independently of one another. For that you’ll want our Editors’ Choice winner, the Wyze Plug Outdoor. It doesn’t support HomeKit, but it works with plenty of third-party devices and will tell you how much power it's drawing, and at $10.99 it’s the most affordable model we've tested.

As with most outdoor models, the Wemo Wi-Fi Smart Outdoor Plug is black and uses a plastic IP44 enclosure to protect it from rain and dust. It measures 3.7 by 3.6 by 1.6 inches (HWD) and has an on/off button on the front and dual three-prong outlets on the bottom.

An 8-inch power cord with a three-prong plug is hardwired to the top of the device. When not in use, the outlets are protected by rubber gaskets. The plug connects to your home network using an embedded 2.4GHz Wi-Fi radio. 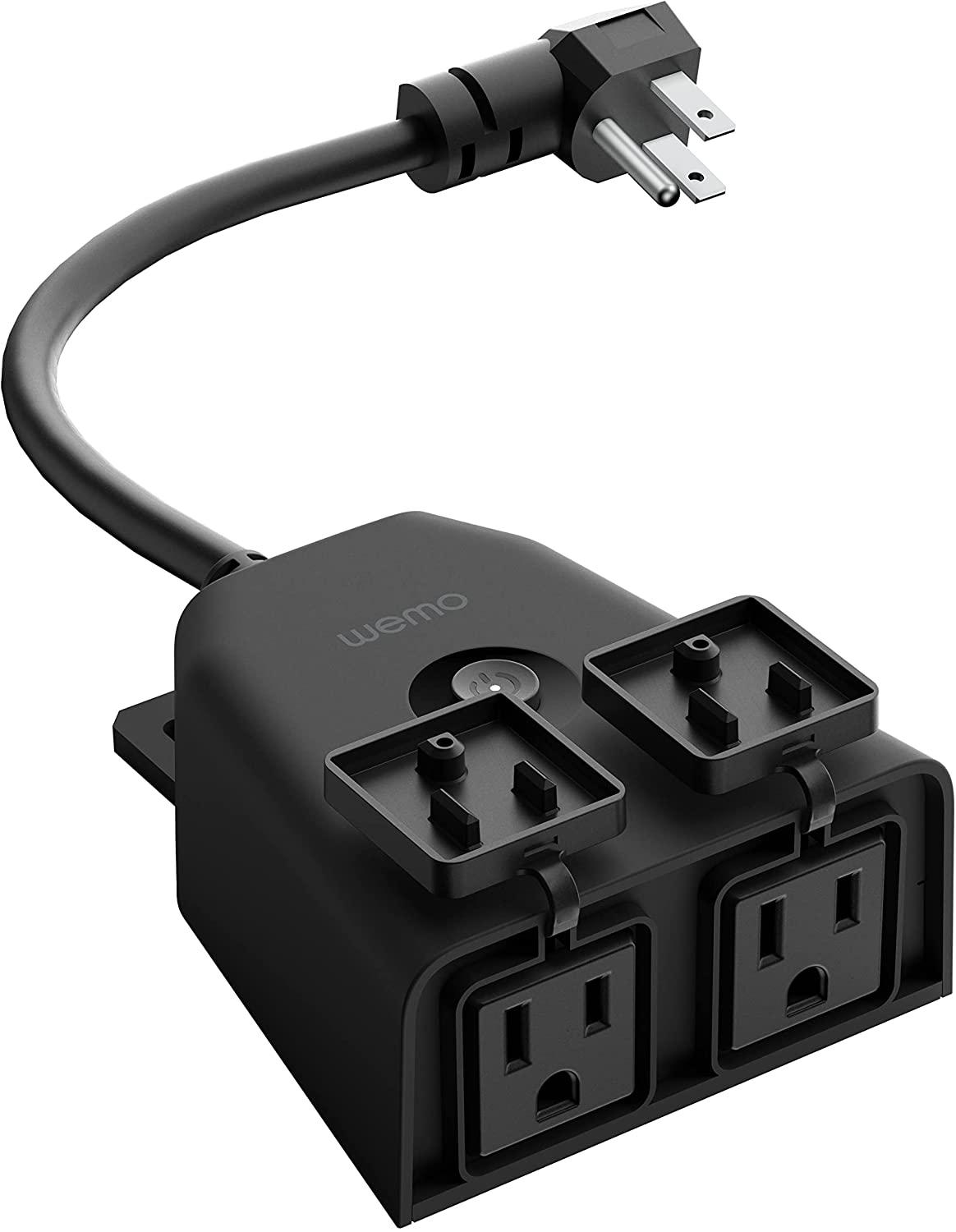 The Wemo plug works Apple HomeKit and Siri voice commands, as well as Amazon Alexa and Google Assistant voice services. It also supports IFTTT applets that allow it to interact with other smart devices such as security cameras, door locks, thermostats, and more. Power usage reporting is lacking, however.

The plug uses the same Wemo mobile app (for Android and iOS) as other Wemo devices such as the Wemo Mini Smart Plug. It appears in its own panel on the Devices page, along with any other Wemo devices you have installed. It has an on/off button that is green when on and gray when off. There’s only one button, which means you can’t control each outlet independently like you can with the Wyze Plug Outdoor and the Kasa Smart Wi-Fi Outdoor Plug KP400.

At the bottom of the screen are buttons labeled Devices, Rules, and More. The Devices button takes you back to the main screen and the Rules button takes you to a screen where you can create on/off schedules and set an auto-off timer. You can also set the plug to Away mode to have it turn on and off at random times to make it appear as if someone is home while you’re away.

Tap the More button to change security settings, update the firmware, connect to Apple HomeKit, IFTTT, Amazon Alexa, and Google Assistant, and to view tutorials for things like setting up the plug and making rules. Here you can join the Wemo Community website that has news, announcements, and helpful tips, and you can access the Wemo support site.

Installing the Wemo plug was fast and easy in testing. I already had the Wemo app installed on my phone, but if this is your first Wemo product, you’ll have to download the app and create an account. I plugged the device into a GFCI outlet and tapped the plus icon in the upper right corner of the app’s Devices screen to add it. I chose Smart Plug from the menu, selected the Outdoor Plug, and verified that it was plugged in and that the LED was blinking two colors.

I used my phone to scan the HomeKit code found on the setup card and on the back of the plug, and added the plug to my Home. After a few seconds I was prompted to give the plug a name and location and the installation was complete.

The Wemo plug worked well in testing. It responded instantly to on and off commands using Alexa and Siri voice control and when using the mobile app. I added the plug to a HomeKit scene to have it turn on at sunset and it worked as expected, as did my Alexa routine to have it turn on when a Ring Stick Up Cam detected motion. My on and off schedules were also adhered to without issue.

A Versatile But Pricey Plug

The Belkin Wemo Wi-Fi Smart Outdoor Plug lets you turn pool pumps, decorative lighting, and other outdoor appliances into smart devices that you can control with your phone or with your voice. It installs in minutes and works with lots of other smart products, and it supports Apple’s HomeKit platform as well as Amazon Alexa and Google Assistant. That said, you can’t control each outlet independently like you can with other plugs, and you don’t get power usage reports. If you can live without HomeKit support, our Editors’ Choice, the Wyze Plug Outdoor, offers independent outlet control, Alexa, Google, and IFTTT support, and it’ll tell you how much energy it’s using for a fraction of the price of the Wemo plug.