There is a lot of adorable, and yet stupid, touches in old Japanese tin cars. I love the crazy door locks. The speedometer is totally cornball. The tail light design is hokey.

I remember the seats. They were padded about as well as the dash, but covered in a vinyl that felt like soft duct tape. The doors banged shut and reminded you that there was nothing between you and the outside except a recycled Folgers coffee can. And the ash trays – the Japanese and Americans back then smoked everywhere. So you have tiny little metal ash trays in the ity-bity rear doors that tilted out, yet also threatened to pull out the vinyl door trim around the ash tray when you used them.

If you want to still see adorable little Japanese cars, you need to rent some Miyazaki movies. That guy is obsessed with drawing every detail in old Japanese tin cars. He is obviously a car nut. 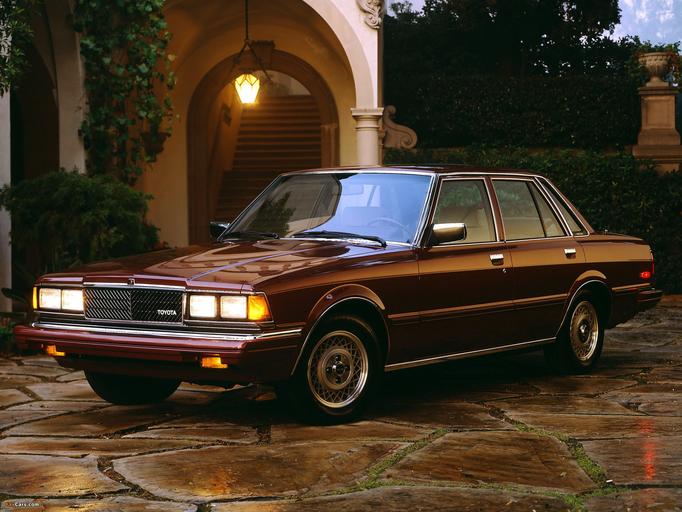 My old Hilux, like this vehicle, had a windshield sealed with a think strip of bamboo under the rubber seals. As it aged, the rubber got stiffer and pulled back. I had to carefully shove the bamboo back to the place from where it slipped.

No air conditioning. On summer days these little tin cars often got very warm. Many mornings I drove to work without my shirt, tie or jacket, then dressed standing next to where I could find a parking spot in the Lincoln Park garage.

Fabulous engine. True, these little tin traps rusted, but those engines were bullet proof. By the time I started to restore it, there was nothing between me and the road except for the rubber mats and a wooden board I used as a seat brace to keep me from tilting towards the door when I drove. That engine was the reason I pop riveted, Bondo’ed, aluminum taped, and repainted and customized that old Toyota. That, and I was broke.

Old Toyotas are memorable. Today’s are not. What made them appealing forty years ago is gone. Today’s Toyotas have no charms because charms could effect sales. Every detail in today’s vehicles has been preplanned to eliminate anything interesting which could make a retiring Kindergarten teacher possibly frown. Perhaps that is why Toyotas are often driven by old people who don’t like surprises anymore.

I’m glad I was younger and shorter back then. These cars had no leg room for me back then, and today I would have a lot of problems folding my legs up for a long commute. But for this car – I would do it.