Sourcing electric trucks proves to be a heavy lift for B.C. sign company

With four Teslas in hand, Imperial Sign’s entire light-duty fleet is electric. But owner Tom Corner says his goal of doing the same with the company’s truck fleet is being held back by a lack of suitable vehicles and a dearth of public charging in its territory

“We’ve electrified 100 per cent of the vehicles that we can currently,” says Corner, a former financial economist who saw an opportunity to take ISC to a new level when the former owner, Dave Downing, now in his 70s, wanted to sell. “To our knowledge, we’re the first company in custom signage manufacturing to have a full light-duty EV fleet.”

As managing director, Corner leaves ISC’s operations to the company’s signage experts, providing strategic leadership “to the best of my ability.” From day one, he’s worked to enhance ISC’s sustainability as a core principle. “For a company like ours, there’s all kinds of ways that we can reduce our carbon emissions and actually end up saving [money],” says Corner.

Thanks to the EVs and a host of other efficiency measures and offset purchases, ISC’s operations are now independently certified, by Climate Smart Business Inc. of Vancouver, as carbon neutral.

The vehicle economics, meanwhile, are “very positive,” Corner says. That first Tesla 3 “has something like 100,000 kilometres on it. When one does back-of-the-envelope calculations on what gas would have cost us for that vehicle alone, never mind maintenance or anything else, the total cost of ownership is probably significantly lower than the gas bill would have been on an internal combustion vehicle.”

And yet, Corner remains frustrated by his inability to go further by electrifying ISC’s four-vehicle, medium-duty truck and van fleet. “We wanted to try to be the first [company in our sector] to have a heavy-duty fleet that was also electric,” he says. 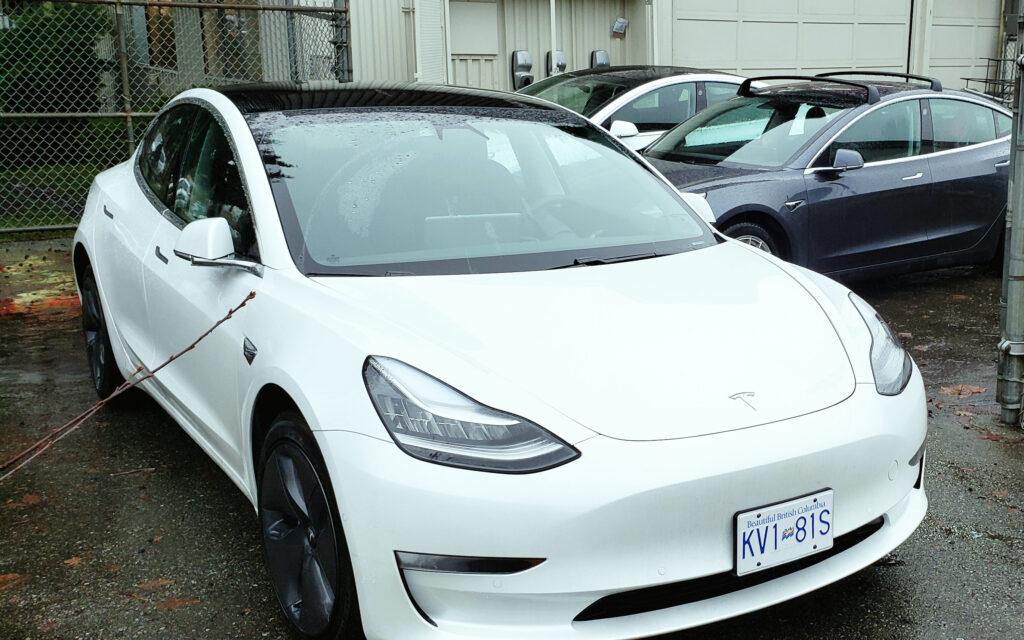 But two obstacles have stood in the way. “There’s limits for larger vehicles [as] to what can be obtained, number one. And number two relates to charging infrastructure.”

ISC’s Teslas are used mainly by the company’s project managers, doing site surveys and delivering samples and small projects. But to haul and install most of the signage and lighting it makes in its plant, ISC uses a crane truck, a cargo van with a man lift, a custom flatbed with a Ford F-350 body, a large trailer, and an F-150 pickup. The electrification challenge for those vehicles is compounded by ISC’s extensive service area, spanning southern B.C., Alberta and the northwestern U.S.

Tesla’s sizeable supercharger network makes it possible to cover that territory with cars, Corner says, but he hasn’t yet been able to find any medium-duty vehicles with the range they need to haul heavy loads through the mountains — and even if they existed, he adds, there isn’t enough reliable public fast-charging infrastructure to risk the trip.

“As a business,…charging infrastructure is a necessary condition. It doesn’t matter how much you want to do something, if you can’t charge your vehicle en route to a project in Kelowna or wherever, you’re in trouble,” he says.

Corner isn’t giving up, mind you. And neither is his team, which numbers about 25 employees. “Everyone, I think these days, certainly in B.C. and especially among the younger generation, seems to care quite a lot about sustainability. So there’s a lot of support internally for [finding] different ways that we can lower our carbon footprint even further by adopting more electric fleet.”

One immediate option is to find a plug-in hybrid replacement for the cargo van, Corner says. Another is to swap the F-150 for an electric pickup and tailor its use case to optimize available charging resources.