Amazon’s new Echo Show 8 (2nd gen) is slightly faster to use and has a much better camera than the original Echo Show 8 1st Gen. Otherwise the hardware is the same.

If you haven’t used a smart display before don’t expect it to work like a tablet, think of the Echo Show 8 as a reasonably good speaker for casual listening, with some screen functionality.

The bread and butter key features of a smart home display eg: great voice or touch menu smart home control, setting alarms/timers, viewing the weather, cycling through photos and playing radio/music are handled with ease by the Echo Show 8 .

The Echo Show 8 is shaped like a wedge with 2 x 2 inch speakers and a passive back radiator that is quite effective. At the back is the power cable plug and a USB port which isn’t user accessible.

On the top right is the physical camera privacy shutter which you can easily slide back and forth and see if it’s active or not. Next to it are Volume + – buttons and a Mic mute button.

Setup is easy once you connect to your Wi-Fi and log in with your Amazon account. If you want to use the display as a photo frame when it’s idle, upload your choice of up to 5GB family/holiday photos to Amazon Photos.

One other big benefit Google speakers and smart displays have is Casting, so on a Google Home Hub Gen 2 it doesn’t matter as much that it doesn’t have every single video and audio streaming app available built-in because you can Cast any compatible app to the screen from your phone or tablet. On the Echo Show 8, the only app I could cast from my phone was Amazon Music. 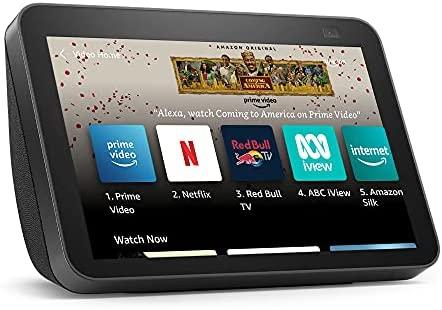 The Echo Show 8 is not a high end audio system but its dual speakers are pleasant, surprisingly loud and didn’t distort even if I turned up the volume to listen to music, radio etc at the other end of our open plan 6m x 4.5m kitchen/dining area.

In terms of 3rd parties for Audio, it works with Spotify, Apple Music and Pocketcasts. Compatible major 3rd party Video services in the menu with voice commands as well are Netflix and ABC iView.

The screen has auto brightness which reacts quickly to changes in light conditions. The automatic colour adaptation to changes in ambient light is good but not quite as good as the Google Nest Hub 2nd gen screen.

Amazon sells Fire TV sticks for TV’s in Australia and those support all the free to air catch up and many of the subscription video streaming services available.

So it’s very disappointing that Amazon’s Echo Show displays only have native voice control for Prime Video, Netflix and ABC iView (partly) so you can’t issue voice commands to play Youtube videos or catch up with the Paralympics on 7 Plus.

It is possible to watch some other video streaming services like Youtube and SBS on Demand by using the built in web browser saying “Amazon open Silk” and then using the touch display to navigate streaming website interfaces, however this is clunky and much slower than a Video service menu button or voice command.

Video calling supports many more options than a Google smart display. Echo Show can call to other Amazon Alexa devices, phones with Alexa app, as well as contacts who use Amazon Chime, Zoom and Skype. Zoom and Skype call ability are not promoted in the menu interface, the onboard menus should be improved to make this clear.

During video calls, if you move to the side or back/closer the camera will pan and zoom to follow you as best as it can. This feature worked best with the Echo Show 8 seeing one person, not so well with two people.

As a bonus feature if you don’t close the camera privacy shutter you can call into your Echo Show 8 and use it as a video security camera eg to check on a pet or see who’s at home. Speaking of video cameras, being an Amazon device Echo Show 8 of course integrates with Ring doorbells perfectly to show you who is at the front door.

To go from good to great the Echo Show software needs to be upgraded to support more major video streaming services like Youtube, 4 remaining free to air networks, Disney+, STAN etc natively by voice command and in the menu.

Should you buy the Echo Show 8?

The more Amazon entertainment services and Amazon Alexa compatible devices you use the more likely you are to find the Echo Show 8 useful and worth buying. Conversely, if the audio & video services you use most are not supported by Amazon and your smart devices don’t support Alexa control then it’s not worth buying.