Roku’s new $49.99 Streaming Stick 4K media streamer replaces the Roku Streaming Stick+ and offers some modest but welcome upgrades. It still gives you access to loads of different apps and services, plus it lets you stream from iOS devices via Apple AirPlay. And, of course, it still streams 4K HDR content in HDR10. The biggest changes are that the device now supports Dolby Vision and HDR10+, capabilities previously only available on the Roku Ultra and certain Roku TVs. It also has a new long-range Wi-Fi module. We ran into some hiccups connecting to 5GHz Wi-Fi in testing, but it didn't affect our experience too much. Ultimately, the similarly priced Amazon Fire TV Stick 4K and Chromecast With Google TV both offer a bit more in the way of non-media features with their robust voice assistants, but the Roku Streaming Stick 4K is a compelling alternative.

The physical design of a media streaming stick or dongle isn't overly important because it will likely stay behind your TV most of the time. That said, the Streaming Stick 4K is one of the sleekest media hubs of its kind. It measures just 3.4 by 0.6 by 0.4 inches (HWD), a fraction of the size of Amazon's Fire TV sticks. It has rounded sides that make it look much less blocky, too. An HDMI plug sticks out of one end, while a micro USB port and reset button sit on the sides, near the other end. It doesn’t include a short HDMI extender like the Fire TV sticks do, but the entire design is about the width of the end of an HDMI cable anyway, so it should fit easily into one of your TV’s ports even if they’re crowded.

You should use the cable and wall adapter that come with the Streaming Stick 4K, and not just to ensure that it gets enough power (as with most 4K media streamers, your TV’s USB ports might not cut it). The main benefit of the USB cable is that it has an inline antenna that enhances the stick’s Wi-Fi range. The older Streaming Stick+ also had inline antennas in its cable, but according to Roku, the new module supports Wi-Fi speeds twice as fast as before. The Streaming Stick 4K doesn't support Wi-Fi 6 like the Amazon Fire TV Stick 4K Max, but as we noted in that review, faster network speeds provide diminishing value for 4K media playback after a certain point. Like most stick-based media hubs, the Streaming Stick 4K doesn't have an option for Ethernet.

You get a standard Roku Voice Remote in the box; it's a squat, black, plastic wand with rounded edges and Roku’s signature large purple, plus-shaped direction pad. Home, Back, and Power buttons sit above the pad, along with a pinhole microphone for voice search. Menu and playback controls are below the pad, along with dedicated buttons for Apple TV+, Disney+, Hulu, and Netflix. The right edge of the remote features a volume rocker and mute button; the remote can control your TV’s volume through HDMI-CEC and IR command. 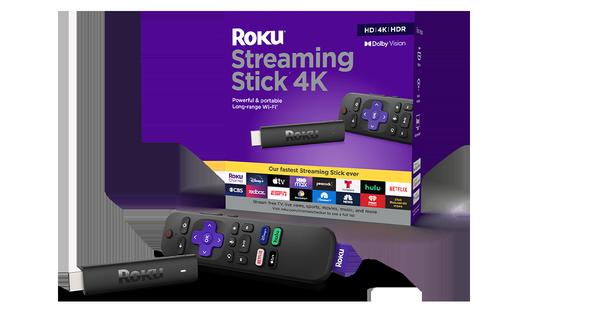 The Streaming Stick 4K offers access to loads of different apps and services. The Roku platform is strong, but not quite as robust as you get with Amazon or Google.

Most of the big video streaming services are present, including Amazon Prime Video, Apple TV+, Disney+, HBO Max, Hulu, Netflix, and YouTube (but not YouTube TV), along with many other more niche services, such as Crunchyroll and Shudder. Twitch still isn’t available on Roku, though. Music streaming services, including Amazon Music, SiriusXM, Spotify, and Tidal are also available. You can find many free services on Roku, including individual networks’ apps, Pluto TV, RetroCrush, and Roku’s own Roku Channel, which aggregates a decent amount of free content.

The Streaming Stick 4K also supports Apple AirPlay 2, so you can stream whatever is on your iPad, iPhone, or Mac directly to the device. There's no Google Cast support, though, which the Chromecast With Google TV has. Bluetooth connectivity is available for connecting headphones.

Roku devices focus almost entirely on the media streaming experience and don't attempt to match the smart voice control features of Amazon or Google’s platforms. Voice control is available through the remote, but it’s exclusively for searching for media, opening apps, and controlling playback. Unlike Amazon or Google streamers, you can’t use the Streaming Stick 4K to get weather reports or control your smart home devices with your voice. The stick itself is compatible with Alexa, Google Assistant, and Apple HomeKit, so you can control it hands-free if you already have a smart speaker with one of those voice assistants. You don't need to worry about these limitations if you just want to stream media, but know that your Roku can’t become your smart home hub.

As its name implies, the Roku Streaming Stick 4K can stream media at up to 4K resolution. It supports high dynamic range (HDR) content, including HDR10, HDR10+, and Dolby Vision. The addition of Dolby Vision and HDR10+ are new for this version of the device.

Despite the enhanced antenna, I ran into some problems connecting the Streaming Stick 4K to my Wi-Fi network. It picked up my 2.4GHz network without a problem, but the 5GHz network just wouldn’t show up despite repeated scans. I couldn’t even manually enter the SSID to get it to connect. Every other media streamer I’ve tested, along with every game system, phone, tablet, and PC, has been able to connect to my 5GHz network. The stick found other 5GHz networks in my building, so this appears to be more of a specific glitch than a widespread problem with connecting to networks on that frequency.

Even just connected to my 2.4GHz network, the Streaming Stick 4K showed strong performance. It reached streaming speeds of 80Mbps, well past the 50Mbps recommended speed for streaming 4K media. (With a 5GHz connection, speeds can easily be four times that measurement.) For testing, I played 4K HDR content from Disney+ and HBO Max; movies and shows in both apps quickly loaded and reached full resolution.

Menu navigation is quick and responsive. Opening certain apps like Disney+ can take up to 10 seconds in my experience, but once apps start, they're stable and responsive. Voice search results pop up almost instantly. Connecting an iPhone over Apple AirPlay is similarly fast.

The Roku Streaming Stick 4K is an excellent 4K media streamer, just like the Streaming Stick+ before it. We like its sleek design and fast performance, despite some Wi-Fi problems in testing. While the Amazon Fire TV Stick 4K and the Chromecast With Google TV receive slightly higher ratings and Editors' Choice awards, the right media streamer for you depends on your current hardware setup and personal taste.

All three devices cost just $50 and can stream 4K HDR content from virtually every major video service, with support for Dolby Vision. Roku’s platform continues to lag behind on non-media features like smart home control and voice assistants, but its support for AirPlay should appeal to Apple device owners. On the other hand, dedicated Android users might prefer the Chromecast for its built-in Google Cast support. And if your home is already filled with Amazon Echo devices, you'll probably appreciate the Fire TV Stick 4K’s Alexa integration.