OPPO’s third annual Inno Day event kicked off today with the unveiling of the company’s first-ever smart glasses, or rather, smart glass, because it’s just a monocle worn on one side of the face — not unlike the Saiyan Scouters in the popular Dragon Ball Z manga. And unlike previous Inno Day events, which showed off concept devices not ready for release, the OPPO Air Glass is a consumer product that will go on sale soon — but only in mainland China.

A render of the OPPO Air Glass.

OPPO Air Glass is an “assisted reality” headset which aims to provide useful information to the user without requiring them to turn to another screen. Think navigation instructions or incoming text messages that automatically pop up in front of your eye.

The Air Glass can be worn itself or attached to a conventional glasses via magnets, and to make the latter setup comfortable, the headset had to be super lightweight, which OPPO engineers said was an absolute priority. To that end, OPPO self-built all the components for Air Glass, including a tiny projector which OPPO named “Spark Micro Projector” that measures 0.5cc, or about the size of a coffee bean. This projector features a CNC metal enclosure with a sapphire glass lens module, and it’s powered by a Micro-LED panel. The total weight of the Air Glass is just 30g, according to OPPO. 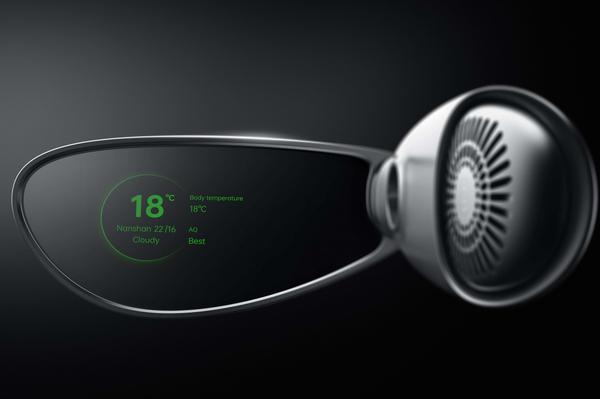 A render showing the internals of the OPPO Air Glass

The frame of the Air Glass includes a Snapdragon 4100 chip, touch bar for controlling the glass, dual microphones, and a speaker. Currently, it can only pair with OPPO Watch 2 and smartphones running ColorOS 11 or later, which means OPPO smartphones and presumably, OnePlus smartphones sold in China.

The Air Glass can be controlled via voice, touch, head or hand gestures — the latter only if the user is wearing an OPPO Watch 2.

The lens measures 0.7mm in thickness, and has a shape inspired by “the wings of a circada,” according to OPPO’s Product Director Yi Xu. Content displayed on the glass reaches a maximum brightness of 1,400 nits, and can be shown in either 16-level grayscale or 256-level grayscale. The frame comes in silver or black and comes in two sizes.

In addition to showing notifications and navigation instructions, what else can the Air Glass do? Obviously you’d be able to take phone calls with it, and listen to music (though you’d only be getting sound from one year). But OPPO is hard at work to build more features, such as using the Air Glass to display teleprompter notes.

OPPO’s Xu also claims the Air Glass can do real-time translation between two people if they both wear the glass. For example, person A speaks English, and person B’s glass will show the translated Chinese text on the display. The Air Glass can only support translation between English and Chinese for now but will support Chinese and Japanese and Chinese and Korean “soon,” said Xu.

The Air Glass can run for about three hours on a single charge, and OPPO is making the APK available to third party app developers. OPPO said the Air Glass will start selling in China in Q1 2022. Price was not available at time of writing, but we will update when it becomes available.