This is the new face of New Zealand's best-selling vehicle

After much teasing, Ford has finally revealed the new Ranger that will go on sale here next year. And it is pretty much exactly what we expected it to be.

The new Ranger isn’t quite “all new”, as it sits on the same T6 platform as the previous Ranger, Everest and the U.S. market Bronco, however the platform has been significantly revised, with a 50mm increase in wheelbase and track.

The platform will also be home to the forthcoming Volkswagen Amarok, although Ford’s chief engineer for the T6 platform, Ian Foston, said that the Volkswagen would be a “fully differentiated sibling product” meaning almost everything you see and touch will be different.

As has been much rumoured during the Ranger’s development, the venerable 3.2-litre inline five-cylinder turbo diesel engine that has been a mainstay of the Ranger line up since the T6 version launched has been dropped in favour of a new 3.0-litre turbo diesel V6 that is a revised and updated version of an engine from the F-150.

READ MORE: * Next-gen Ford Ranger teased again before debut * Next-gen Ranger spotted out and about in Thailand * Ford gives us our best look at the new Ranger yet * Ford unleashes reborn Bronco

While Ford isn’t releasing power and torque figures just yet (or anything in the way of emissions, load capacity or towing), or even which Ranger models or even markets will get the V6, it is hard to imagine we wouldn’t see it here. Alongside the V6, two versions of the 2.0-litre turbo diesel four will continue, with a revised version of the current bi-turbo likely to be the main form of propulsion in the New Zealand market.

A single turbo version of the 2.0-litre is also available at launch, with a range of transmissions that sees a new six-speed automatic lining up alongside a revised version of the existing 10-speed unit, with the six likely for use in lower-spec models. A manual transmission will also be available, but we doubt this will make it here.

But what of electrification? While Ford confirmed that some form of electrified Ranger would indeed be incoming, it wouldn’t be available at launch.

Chief engineer for the T6 platform, Ian Foston said that the company wouldn’t reveal any details about exactly what form of electrification the Ranger would receive just yet, but it had “considered many different propulsion technologies going forward on the T6 Ranger.”

While it has been widely speculated that the electrified Ranger will be a plug-in hybrid powered by a turbocharged 2.3-litre petrol four-cylinder with a single electric motor to generate 270kW and 680Nm of torque, Ford has also teased a fully electric Ranger before, and it’s reluctance to even confirm a PHEV has us wondering if it hasn’t shifted focus to a fully electric version instead.

While the company isn’t revealing too much about deeper mechanical details just yet, it did confirm that its engineers moved the front wheels forward by 50mm for a better off-road approach angle and outboard for better articulation, both of which improve the off-roading experience.

They also shifted the rear suspension dampers outboard of the frame rails to give drivers and passengers a better ride both on- and off-road.

The Ranger will now also have a choice of two four-wheel drive systems; an electronic shift-on-the-fly system, or advanced full-time 4x4 system with an automatic “set-and-forget” mode, while off-road recovery is made easier with prominent dual recovery hooks in the front bumper.

Additionally, the selectable off-road drive modes previously only available in the Raptor are now featured across the 4x4 range, while even the tailgate has been made smarter with the addition of a work surface that provides a built-in ruler and cupholders, as well as clamp pockets so tradies can “hold materials down for clean cuts and precision work.” Spring-loaded caps cover the pockets when not in use. 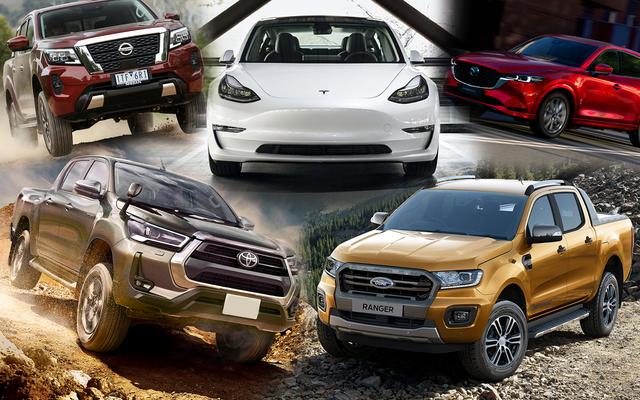 Durable caps now protect the tray edges and tailgate’s upper edge from damage, while structural attachment points are secreted underneath for the attachment of crossbars or a canopy.

But while Ford is still playing its cards close to its chest in regard to mechanicals, the reveal was all about how the new Ranger looks, inside and out.

As widely expected, the third -generation T6 now packs looks in line with the American pick-up line up of the F-150 and Maverick, with a bold new design, a wider stance, more prominent grille and signature ‘C-clamp’ daytime running lamps.

The sides are much more squared-off and flatter than the current model, strengthening the “big American pick-up” look of the Ranger, while the expected step in the side of the rear bumper has also been confirmed.

“This journey started even before we put pen to paper with our first sketches,” said chief designer Max Tran.

Tran’s team spent hundreds of hours with customers around the world to see how they use their Rangers on a daily basis, and conducted more than 5000 interviews and made more than 1,800 pages of field notes for reference, which the company says helped development and guide both engineers and designers to “build a pick-up with the features and capability customers wanted.”

“Seeing owners use their trucks, whether for work, family or play, inspired some fantastic ideas that drove our design and development decisions,” said Tran.

A good example of that, Tran said, is that integrated box side-step in the rear bumper.

“During our clinic sessions, we noticed that many customers had trouble reaching over the side of the truck into the bed; others were standing on the rear tyre or the bumper to gain access. So, we came up with the idea of a box step, behind the rear wheel. We mocked one up, tested it with owners and the response was overwhelming.

“In a very real sense, our customers have been with us all along the vehicle development journey,” he said.

On the inside, Tran said that Ranger buyers wanted a “flexible, modern cockpit that caters to both work and family duties. So, Ranger needs to serve as both a workspace and a haven, providing smart and connected features with more comfort and storage options than ever before.”

To this end, the Ranger’s dash is dominated by either a 10.1-inch or 12-inch touchscreen (depending on model) in the centre stack, and a fully digital instrument panel behind the steering wheel.

The large touchscreen features Ford’s latest Sync 4 infotainment system, which comes with voice-activated communications, entertainment and information systems, as well as an embedded factory-fitted modem, allowing connectivity on the go when linked with the FordPass App with features like remote start, vehicle status check and remote lock and unlock functions via a mobile device. The modem also allows for over-the-air updates.

Most of the traditional driving mode controls have been moved from the dash and centre console to their own dedicated display on the large screen, but thankfully accessible with a single dedicated button, so with one press, drivers can go to dedicated screen for all off-road and drive modes where they can monitor the driveline, steering angle, vehicle pitch and roll angles and other controls.

The next-generation Ranger will be built at Ford’s plants in Thailand and South Africa starting in 2022, while Ford New Zealand says it expects to launch it here mid-2022, and it will be revealing local specifications sometime in the next few weeks.

A local spokesperson also confirmed the electrified version will be available, but had no timing on it just yet.