Hands On With the Sesame Smart Lock

The Sesame smart lock is about a week or so away from shipping to Kickstarter backers, and I had a chance to test it out recently.

Sesame is certainly as easy to install as billed and impressively responsive to smartphone-controlled commands to lock and unlock a deadbolt. Jerming Gu, a co-founder of Candy House, the startup behind the device, guided me through the paces at the San Francisco apartment of Sesame collaborators Wei-ting Kuo and Bou-chen Kuo.

Sesame offers some clear differentiators from other smart locks already on the market like Goji, August, and Kevo. Aside from price—more on that later—Sesame's big value proposition is that it's probably the easiest to install.

Unlike other smart locks, Sesame doesn't require you to replace the inner mechanism of a lock. Instead, the device simply pops over the twist mechanism on the inside of your door, sticking to the door itself via 3M Command Large double-sided tape. As Gu showed me, installing a Sesame is as simple as exposing the tape and placing it on a door.

This works because inside a Sesame smart lock is a self-adjusting mechanism that grips onto the twist knobs of "99.99999999 percent of cylinder deadbolt locks" available in North America and several other regions, as well as some Mortise locks, according to Candy House. So instead of fussing around with a screwdriver and possibly even a chisel, Sesame is up and working within seconds after you pull it out of the box.

That said, my take on the "universal" knob-gripping mechanism inside the device is that it's rather flimsy looking. Sesame's inner workings are made of light plastic—this wouldn't compromise door security any more than having no device on your deadbolt's twist knob, but I wondered how many turns of a lock the device might endure before something inside breaks.

The good news is that Candy House seems aware of this issue. Gu said the startup is planning to use stronger materials in successive generations of the device, possibly metal or ceramic-based parts, but if you're a Kickstarter backer getting a final prototype Sesame in the coming days, it will have plastic inside.

Another concern I had was how Sesame deals with sticky locks. The deadbolt on my own front door at home can require some technique to work, especially when temperatures warp the wood in the door frame a bit. It's not Candy House's responsibility to make sure you've got a smoothly operating deadbolt, of course, but it would be disappointing to receive a device that couldn't handle your tricky door.

That said, Candy House claims that the Sesame "never" jams while other rival devices often do (see more on that below).

Wi-Fi on the SideThe Sesame's Wi-Fi connection is operated by a dongle instead of integrated into the lock itself as with rival smart locks. That's great for conserving battery life in the smart lock, since it's only powering Bluetooth LE 4.0 to communicate with the Wi-Fi dongle, which plugs into a wall outlet, as well as in-range smartphones loaded with the Sesame app for operating the lock.

This also means that you can opt to purchase a Sesame lock without Wi-Fi. Doing without Wi-Fi limits what you're able to do with your lock remotely—you wouldn't be able to set up temporary passcode access to your home for Airbnb renters while away from your domicile, for example. With no Wi-Fi dongle, your Sesame also won't connect to your home network and send out alerts over the Internet.

But buying a Sesame with no Wi-Fi also means you're getting a perfectly functional smart lock for just $99. That's considerably less than the Goji ($299), August ($249), or Kevo ($219) smart locks, but similar to the Lockitron Bolt. With the Wi-Fi dongle included, Candy House charges $149.

The startup offers free apps for operating the Sesame smart lock on the iOS, Android, and Windows Phone platforms. BlackBerry users can also operate the lock with the Android app. In my Sesame hands on, we used an iPhone to control the lock after a quick calibration process and setting the twist knob positioning to "locked" or "unlocked."

Sesame Smart Lock Specs/Credit: SesameOnce in range of the Sesame's Bluetooth sensor, the app on your phone opens and you can simply tap it to lock or unlock your deadbolt. An even cooler way to operate your Sesame is to keep the phone in your pocket and give a quick couple of syncopated knocks on the screen—presto, your Sesame unlocks the front door when its built-in accelerometer detects the knock pattern you've established.

Color options include Matte Black, Leather White, Champagne Pink, Metallic Silver, Champagne Gold, and Champagne Silver. There's also a version with a wood cover and Gu told me the startup had inquiries about a clear plastic model, which Candy House is hoping to produce in the coming months.

The smart lock is powered by two CR123A lithium batteries, which promise 500 days of operation, and the device alerts you when its batteries are running low. 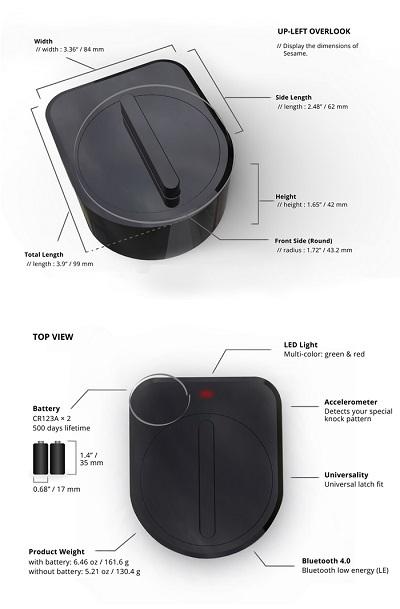 Security and the Smart Home

Sesame works with Apple HomeKit, but Candy House hasn't settled any one of the competing smart home protocols out there, such as IFTTT, Neeo, Almond+, Smartthings, or Nest. Sesame's Wi-Fi access point runs open-source Linux, which means users can "slightly modify and make it compatible with any protocol," the startup said.

Meanwhile, the Android version adds voice command capabilities to Sesame, so you can unlock a door by saying "Open Sesame" if you wish. You'll need a Bluetooth LE 4.0-enabled phone to use the smart lock, of course. And if you lose your phone, the same old key you used to get into your home before you got a Sesame still works—the device doesn't change any of the original hardware in your deadbolt, after all.

Naturally, security is a major concern for a device like Sesame, which controls the first line of defense into the home. Eschewing the Wi-Fi connection might make some feel a bit safer, since the ability to access the device is then limited to Bluetooth. Gu assured me that the device boasts "military-grade encryption," featuring AES 256-bit and TLS 1.2.

But what about access data for a Sesame you might be placing on the cloud? Candy House can't and doesn't ever see that, according to Gu.

As for more physically based door security, folks who have multiple deadbolts on a door will need multiple Sesame smart locks, but they'll be able to link them together with just one app on one phone, he said.

Candy House has just five more days left in its Kickstarter campaign, which blew past its $100,000 goal shortly after launching on Feb. 25. The startup has raised more than $1.1 million to date from over 6,600 backers and plans to ship Sesame units being fashioned in Taiwan to backers beginning later this month or in early May.

UPDATE:Lockitron co-founder Paul Gerhardt contacted us Tuesday to dispute the representation in the Candy House comparison between its Sesame and a Lockitron smart lock, as shown in the YouTube video linked above:

"I was frustrated to see a link in your recent Sesame article showing Lockitron jamming. We are in the process of requesting Sesame remove this video as it is a deliberate misrepresentation of our product being intentionally misinstalled by the Sesame team. The product comes with a metal plate with inset grooves for lining up one's lock. In the video, the installer deliberately does not insert the lock into one of these groovesthereby preventing the correct operation of the device.

"I request that PC Mag also removes the link.

"The suggestion put forth by Mr. Gu that their product never jams but ours does is misleading. As you mentioned in your article, both products fit over normal locks, both products will jam if the underlying lock jams."

We're going to leave the link to the Sesame video to allow readers to judge for themselves if Gerhardt's complaints are valid. For the record, my own impression is that he has a legit beef with the way the Lockitron's metal plate is installed in the videoit certainly looks like it isn't fitted behind the twist knob properly.

UPDATE II:Candy House and Gu wrote in with the following reply to Lockitron:

"Lockitron only provides two metal grooves to help line up their product. This means Lockitron only works with two very specific locksnot even two kinds of locks. There are more than 100 different deadbolt locks on the U.S. market today. The reason the metal groove wasn't used in the video is that it [didn't] work for my locka common deadbolt widely used in Stanford dormsbecause the thumbturn is very long, eccentric, and asymmetric. Lockitron stopped shipping this particular product in February, so perhaps they're aware of these limitations."

At any rate, we hope to get these two smart locks in our lab soon to resolve these issues with a more clinical eye.

Sign up for What's New Now to get our top stories delivered to your inbox every morning.