Kendall Graveman didn’t have to pitch perfectly against the White Sox in the playoffs for them to take notice.

“We feel there's still some upside there,” White Sox general manager Rick Hahn said last week, after signing Graveman to a three-year deal. “He's still growing in the role, there's still a way to make a few refinements along the way and perhaps get even more success out of a guy who pitched extremely well in a pennant race last year and in the postseason.”

Graveman was a key part of the Astros’ gentleman’s sweep of the White Sox in a best-of-five American League Division Series, and beyond. Though the setup man didn’t completely dominate his ALDS opponent, he was exactly what the Astros needed him to be, en route to a World Series appearance.

A closer look at Graveman’s performance against the White Sox in the ALDS, and his journey there, shows why his former opponent decided Graveman was exactly the player they needed heading into 2022.

Graveman, like White Sox closer Liam Hendriks, is a starter-turned-reliever-turned closer. The pair even played together in Oakland. But health was the biggest factor in Graveman’s switch. After undergoing Tommy John surgery, which wiped out Graveman’s 2019 season, the right-hander was diagnosed with a benign bone tumor in his cervical spine.

“To go into the bullpen was the only way to keep my career alive,” Graveman said in his introductory press conference last week. “By the grace of God, just being blessed to be able to fit in this role, that I’m still pitching because there are many days dealing with (the tumor), I felt my career was over. So, the transition was easy. Still have to make pitches and get outs.” 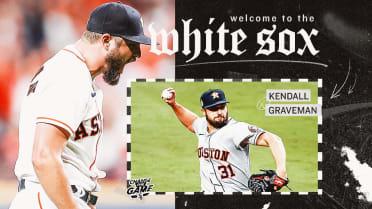 This year was Graveman’s first full season as a reliever. By the trade deadline, he’d established himself as the Mariners’ closer and caught the Astros’ attention. Houston brought Graveman in as their setup man, with their sights set on a deep playoff run.

“I learned that every out is magnified in the postseason,” Graveman said of the experience, his first in the playoffs. “I learned that there's no need to panic, and I think that a young team has a tendency to, even when their backs are against the wall or you're down a few games, to (put) extra stress on every pitch in the game instead of going out and having fun and just the playing the game the way you have throughout 162.”

Graveman’s career trajectory makes it clear why the White Sox see more opportunities for growth. When they faced Graveman in the playoffs, he was coming off some late-season struggles that he attributes to fatigue. But Graveman rebounded in time for October.

“What I saw, he is a really good pitcher,” said White Sox outfielder Eloy Jiménez, who didn’t face Graveman himself in the playoffs but looked on as the setup man allowed one run in three appearances against the South Siders. “And adding him to our team, it was a good move for the front office.”

The one run Graveman gave up came after he entered Game 1 with a six-run cushion. Thought the White Sox made line drive contact against Graveman in that contest, his ability to induce ground balls was on display in his next two appearances.

“He gives a little bit of a different look, in terms of repertoire, from what our other relief arms bring,” Hahn said, referencing Graveman’s high ground ball rate (54.9 percent in 2021). “He obviously has experience in a variety of relief roles and has had success in them.”

In Graveman’s first engagement as a member of the White Sox, he seemed eager to build on his past season, embracing the opportunities for “refinement” that the White Sox had identified. But from the ups and downs of his career so far, Graveman also has lessons to pass on to some of the younger members of the bullpen.

“How can I myself get better,” Graveman said, “but also how can I make others better around me.”