FORD has taken some of the mechanical upgrades from its range-topping Ranger Raptor off-road pick-up and applied it at a more affordable price point to create the new FX4 Max variant, due in local showrooms before year’s end priced from $65,940 plus on-road costs.

Its price point makes it the most expensive non-Raptor Ranger bar the limited-run Wildtrak X, and sits $11,250 underneath the Raptor flagship.

Based on the XLT dual-cab 4x4 pick-up, the FX4 Max is easily distinguishable from the outside by a number of Raptor-inspired upgrades, starting with its 32-inch BF Goodrich All-Terrain tyres and 17-inch dark grey alloy wheels.

A full-size spare tyre with the chunky rubber has also been fitted underneath the rear tub.

Squeezing the larger tyres under the wheelarches has been made possible with the fitment of Fox 2.0-inch shocks which creates a 20mm suspension lift, combining with the tyres to provide a 31mm-taller ride height over the XLT.

The bespoke suspension features a unique tune for the front coils and rear leafs (the latter of which scores remote reservoir shocks), while new lock-stop profile steering knuckles, front jounce bumpers and a 29mm front stabiliser bar are also included.

With the rear leaf springs retained, the FX4 Max features a payload of 981kg, while braked towing capacity remains steady at an industry standard 3500kg, with a tow bar fitted on all examples. 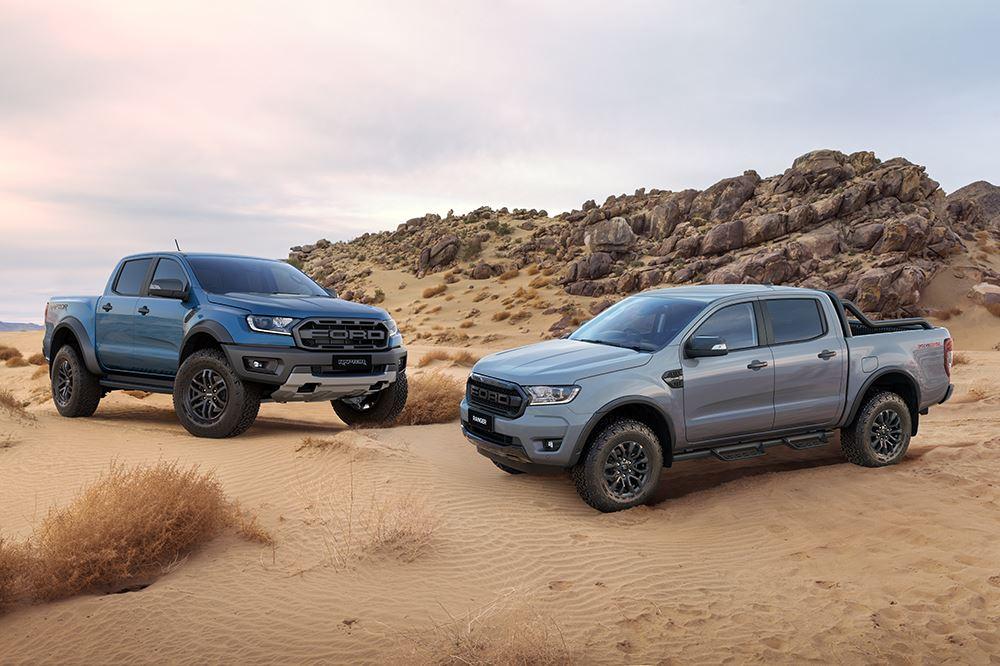 A number of exterior styling features have been borrowed from the Raptor, including the ‘FORD’ lettering on the front grille with dark grey surround, with the colour also included on the skid plate, exterior mirror caps, door handles, rear tray surrounds and wheelarch mouldings, which have been extended to fit the wider track.

Two colour options are available – Alabaster White pearlescent and the previously Raptor-only Conquer Grey – while an optional graphics pack is also available for the bonnet flanks and rear.

Like the Raptor, the FX4 Max is available exclusively with the 157kW/500Nm 2.0-litre bi-turbo four-cylinder diesel engine, driving all four wheels via a ten-speed automatic transmission.

An optional tech pack can be had for $850, which includes adaptive cruise control and semi-autonomous active park assist.

Ford Australia president and CEO Andrew Birkic said the FX4 Max provided a new option for buyers looking for the increased capability of the Ranger Raptor.

“The Ranger FX4 Max channels the Ranger Raptor with its unique look and stance, while bringing customers both work and play capability with its locally engineered suspension, chassis tuning and unique Fox Shocks,” he said.

“A factory-finished Ranger, FX4 Max builds on the previous FX4 to deliver even greater off-road capability, yet adds its own distinctive style and genuine mechanical upgrades for a truly one-of-a-kind Ranger.”

The Road to Recovery podcast series