Lenovo produced the first Google Assistant Smart Display in 2018, and has been in the category ever since. While Google has traditionally focused on the kitchen for its smart screens, Lenovo turned to the bedroom, first with the Smart Clock, then the Smart Clock Essential, and now the Smart Clock 2.

While it’s true that Google’s latest Nest Hub (2nd Gen) brought sleep-tracking improvements to its arsenal, we think Lenovo has a compelling counter-argument in the Smart Clock 2. The second-generation clock brings a fully functional Google Assistant-powered clock to your nightstand, without the creepy “watching you sleep” stuff. So which is the king of the bedroom?

Lenovo has not evolved its design a whole lot through the various iterations of its smart clocks. It still uses the same woven fabric covering on the outside, with an LCD screen on the front. This is a 4-inch LCD, which is a bit on the small side, but for a clock face, it’s more than adequate. There are a variety of clock faces you can choose from, including your Google Photos if you want. The touchscreen is a little finicky, sometimes failing to register touches or complete the swipes upon which the operating system is so dependent.

You could buy an alarm clock, a Nest Mini 2, and a Qi charging plate for the same amount of money, and you still wouldn’t match all the functionality that the Smart Clock 2 device brings to your bedside table.

The newest addition to this generation of the smart clock comes on the bottom. Along with the smart clock, you get a base plate that has a USB-A port for charging another device and a MagSafe-compatible Qi-charging plate for wirelessly charging your smartphone. The charging plate charges at 5 watts, 7.5W, or 10W and includes a circle of magnets for grabbing onto your MagSafe-compatible phones. MagSafe is a nice addition because it reduces the risk of accidentally knocking your phone off the charger in your sleep.

Speaking of knocking things off the plate, the clock is smartly designed so that the power cable plugs into the clock itself and copper contacts on the bottom plug into and power the plate. This way, the clock works without the base, depending on how much room your nightstand has. And speaking of magnets, the clock also attaches to the base with magnets, making it quite secure.

Beyond that, there are volume buttons on top of the clock, and in-between is a tap-sensitive area you can use to stop or snooze your alarms, depending on how you configure it. Of course, you can also tell Google to snooze or simply stop your alarm. A mute switch on the back disables the microphone for Google Assistant.

As for the sound quality, it’s pretty good. A pair of 3W speakers power the alarm clock and the music you play through it. There is very little bass on the low end, but the rest of the sonic range is adequately represented. It’s about on par with what you’ll get from a Nest Mini 2. 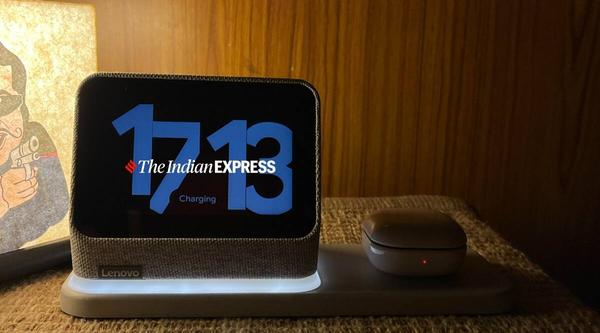 While you use the Google Home app to configure Wi-Fi, its location in your home, and various services to use for video and audio, most of the device setup is done on the device. Android Things powers the clock, and it’s filled with gestures and taps to configure whatever you need. Most commands can be executed by using “Hey Google” commands, such as setting alarms, adjusting the volume, and turning on the night light.

While I would never advocate for a separate app just for a clock, I would like to see more functionality integrated into the Google Home app.

Your clock face also has a sort of ticker that you can swipe through to play music, see your reminders and calendar entries, set an alarm, and more. Once you get used to it, it works pretty well, but the bulk of my interactions with the clock came from Google Assistant, which is both good and bad. On the one hand, it’s great to lay down in bed and tell Google to set an alarm. On the other hand, it can get frustrating when you ask for an alarm at 7:15, and it replies, “7:50, you got it!”

This is nothing new for Google Assistant, but it doesn’t make it less frustrating. Most of the time, it works without a hitch, but when there is one, it’s maddening. I’d also like to see more control of the clock available through an app. While touch is a great way to manipulate settings, reaching over and touching the clock is not a great experience. While I would never advocate for a separate app just for a clock, I would like to see more functionality integrated into the Google Home app. It would be nice to be able to set alarms there or adjust the clock face, for example.

Finally, I have to admit I’m torn by this detail as to whether it’s positive or negative, but this clock has a full-color screen that cannot play video. What’s up with that? You can cast audio to the clock which is nice, but since there’s a full-color LCD screen, why can’t I toss on a movie to fall asleep to? Maybe this is just too niche of a potential use for the clock, but it seems like an oversight.

Then again, maybe I shouldn’t want Lenovo to allow me to watch a movie on a 4-inch screen. I get that, and perhaps the lack of compatibility is Lenovo saving me from myself. I can’t argue with that point. But I think overall, I’d rather have the choice.

This is a nice update to the Lenovo Smart Clock line of devices. The charging plate accessory in particular is a favorite of ours. Google Assistant is a great way to wake up and start routines. I’d like to see a bigger screen, video capability, and a more intuitive interface, but those omissions don’t detract from the overall experience much.

You get a lot of utility and functionality for $70. This is not only a good product, but a good value.

There isn’t much competition in this field yet, but the closest competitor that is actively competing for a spot on your bedside table is the Nest Hub (2nd Gen). That device costs a little more, but adds wearable-free sleep tracking to the package, which is compelling for sure. It also boasts video streaming capabilities and a larger screen. If you want those additions, you’re probably better off with the Nest Hub (2nd Gen). However, if you don’t mind not being able to play videos, or you want a smaller screen or a Qi charging plate, this is a great pickup.

If you’re not into the Google ecosystem at all, or you’re more plugged into Amazon’s, then the Echo Show 8 or Echo Show 10 are both good choices. It all comes down to your preference.

The Lenovo Smart Clock 2 is well-built and solid with a fabric covering. I don’t anticipate any issues with this device long term. It has a one-year limited warranty available on Lenovo’s support website.

Yes, this is a great pickup for the price. In fact, between the Nest Hub (2nd Gen) and this, there is no clear winner. If you want a little more, you pay a little more. You could buy an alarm clock, a Nest Mini 2, and a Qi charging plate for the same amount of money, and you still wouldn’t match all the functionality that this device brings to your bedside table.