“Best Book Club Ever” read one sign inside Amazon Books at Seattle’s University Village this weekend. On the bookshelves below it were products including an electric 1.5-liter ceramic kettle, a sugar dispenser, and a marble cheese slicer.

Elsewhere in the store, shoppers browsed items as varied as a plush baby shark, a Lite Brite, Funko figurines, a USB mic, game consoles, a smart fitness scale, a WiFi router, and kitchen scissors. There was not, as far as I could tell, a kitchen sink.

Yes, there were books in this bookstore. But they were surrounded by a cacophony of commerce. Looking around at the seemingly random array of products, it felt like a bookstore subsumed by a variety store — an experiment gone awry, or more likely, an approach influenced by two different executive regimes.

No wonder Amazon is pulling the plug, I thought to myself.

This is one of 68 Amazon stores that will close in the weeks ahead. The company said last week that it will shutter its Amazon 4-star, Amazon Books, and Amazon Pop Up retail outlets, focusing instead on its grocery, convenience and fashion stores.

It wasn’t always this way at University Village.

This bookstore was Amazon’s first full-fledged physical store when it opened in November 2015. Long before Amazon Go convenience stores, Amazon Fresh grocery stores, or the acquisition of Whole Food Market, this was a major move into bricks-and-mortar retail by a company that made its mark selling books online.

The importance of the store was illustrated by Amazon’s secrecy in advance of the unveiling. The company used the code name “Project Anne” in the blueprints to keep its identity under wraps. Multiple layers of coverings inside the store thwarted our creative attempt to peek through an upper window, using a camera on a pole.

After it opened, curious shoppers lined up around the block to see what was in the 7,400-square-foot store. What they found at the time was a temple of popular books, a selection of top-rated titles from Amazon.

“We’ve got this great information that can help people find books they love in a different way,” said Jennifer Cast, then vice president of Amazon Books, during our first tour. “It’s a great mixture of art and science for us.”

Books were shown face-out, with review cards underneath them, providing the “opinions and assessments of Amazon.com’s book-loving customers” to help in-person shoppers make their selections, as Cast wrote in her introductory message about the opening of the store.

The store also featured Amazon devices when it opened, but that was about as far as it went beyond books. 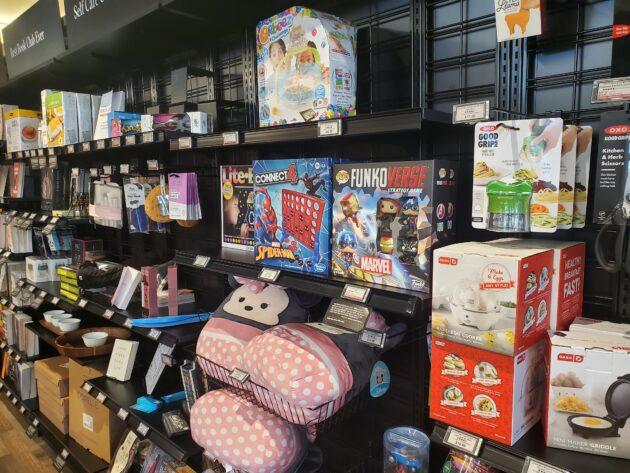 More than six years after the University Village store opened, all of those original elements are still there, but “Amazon Books” is a misnomer. In reality, it’s a hybrid between the bookstore and the Amazon 4-star retail concept, featuring highly rated and best-selling products from Amazon.com.

The scattershot approach also feels like a misfit in the context of the upscale University Village shopping center, with highly focused specialty shops and showrooms from major brands such as Tesla, Allbirds, Aveda, and Warby Parker.

“They clearly hoped for synergy between retail and e-commerce grocery, and it hasn’t worked,” Pachter wrote in an email. “I think they pulled the plug on other physical retail because they realize they just aren’t good at it.”

However, it would be wrong to dismiss the store as a complete mistake. Like any good experiment, it showed the company what worked and what didn’t, and set the stage for what was to come.

After the announcement, my colleague Kurt Schlosser talked with Amazon Books customers who were sad to see the store go, and not just because it spells the end of the shopping center’s last remaining bookstore. Several said they used it as a convenient hub to return Amazon products purchased online.

One said she also appreciated the variety of products.

“I try to buy other Amazon products there because it’s not environmentally friendly to have everything shipped,” said Christa Kleiner, who has been a regular Amazon Books customer. “I like their curated selection of games and Top 20 Amazon Finds. We use that store a lot. It makes me sad.”

During my visit on Sunday afternoon, I wasn’t able to find the book I wanted, Stolen Focus, despite the fact that it’s currently the #1 best-seller in the category of “social aspects of technology.” I found the book recently at my local indie bookstore, Secret Garden Books in Ballard, and wanted to get another copy for a friend.

However, I did find a charging cable that I’d been meaning to buy for the house.

And before I left, I experienced Amazon’s real retail expertise: the underlying infrastructure for seamless payments and checkout. The Amazon One system quickly recognized my palm, which I registered long ago at the original Amazon Go store in Seattle, allowing me to walk out without touching my wallet or my phone. I had a similar experience last week at Climate Pledge Arena.

Even if the Amazon Books retail concept didn’t work out in the end, this store and others provided Amazon with an additional footprint to test Amazon One beyond its grocery stores, as it seeks to license the technology to others.

As Amazon founder Jeff Bezos once said, “If the size of your failures isn’t growing, you’re not going to be inventing at a size that can actually move the needle.”

On the butcher paper roll above the register inside Amazon Books on Sunday was another piece of wisdom, from Anne of Green Gables author L.M. Montgomery: “Isn’t it nice to think that tomorrow is a new day with no mistakes in it yet?”