Whether you're looking to turn a dorm room into the ultimate party zone or you just want some soft illumination under your kitchen cabinets, the Wyze Light Strip Pro makes it easy and affordable to achieve a wide range of accent lighting goals. It's a thin, flexible strip of LEDs you can stick to virtually any indoor surface—whether that's behind your TV or headboard, or along the edge of a fish tank or staircase—and control via your phone or voice. Starting at $33.99, the Light Strip Pro significantly undercuts the competition without compromising on functionality or features. It offers lots of fun effects and useful automations, has a microphone to sync the beat of music, and works with Amazon Alexa and Google Assistant. All of this makes it our new Editors' Choice winner for smart light strips.

Wyze makes two versions of this product, the Light Strip and the Light Strip Pro. Both feature clusters of blue, red, and green LEDs, spaced 1 inch apart, that can display 16 million colors. They are available in two lengths: 16.4 feet and 32.8 feet, measure just shy of 0.5 inches wide, feature double-sided tape on the back for easy installation, and have a life expectancy of 25,000 hours.

For this review, we tested a 16.4-foot version of the Light Strip Pro.

No matter which you choose, the strip comes with a power adapter, controller, alcohol wipes to clean your wall prior to installation, adhesive clips to reinforce the strip if necessary, and a quick start guide. The 32.8-foot version isn't one long strip, but instead two 16.4-foot strips with the controller in the middle. Unfortunately, you can't connect multiple Wyze strips together. But the strips are trimmable; they feature designated cutting marks every 4 inches so you can shorten them to fit your desired location.

Selecting a Spot and Mounting the Strip

To set up your strip, you first need to find an area to mount the controller, making sure its cords can reach both an outlet and your desired lighting location. When you find a good spot, clean it with an included wipe, then uncover the controller's adhesive backing and firmly stick it in place, making sure the side button is accessible. Next, use a wipe to clean the strip mounting location and let it dry. Finally, plug the strip into the controller, peel the film from the strip's adhesive backing, and begin pressing it into place.

If you're installing the strip at a 90-degree angle, Wyze says to avoid bending it where the LED is located; instead, make a loop and reinforce each side with an included clip. If the strip is too long for your desired location, you can cut it at a designated mark; just make sure the power adapter is unplugged before doing so. If the adhesive backing isn't strong enough, you can use the included clips to reinforce the strip, but I didn't need to.

For me, the hardest part of the mounting process was selecting a location where the controller and power cord would be hidden. I ended up mounting the Light Strip Pro on the molding around my living room window, and it works perfectly in this location. Since I have a couch under the window, the controller and cords don't show. The entire process of selecting a location, cleaning the molding and the wall, and mounting the light strip took around 45 minutes.

When you're done mounting the strip, open the Wyze app (available for Android and iOS), tap the plus sign in the top left corner of the Home tab, select Add Device > Wyze Light Strip Pro. Then, press and hold the controller's side button for seven seconds to put it in pairing mode. The LED on the controller will flash blue and yellow to indicate it's ready for pairing, after which you can follow the directions in the Wyze app to finish pairing the device to your account. 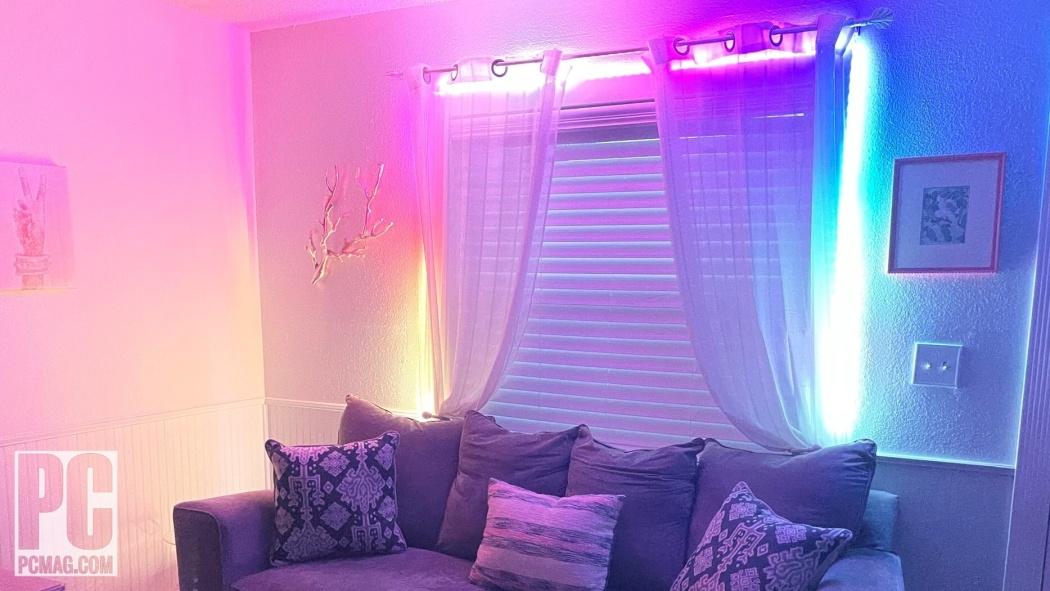 When setting it up, you'll need to give the app permission to access your location and use Bluetooth. After you grant those permissions and select your home Wi-Fi network, the app will begin searching for your light strip. In testing, it almost immediately found the strip, then gave me the option to create a custom name, and I was good to go.

You can operate with Light Strip Pro using the wall-mounted controller, your phone via the Wyze app, or your voice via Amazon Alexa or Google Assistant.

The controller mounted under my desk(Photo: Angela Moscaritolo)

The Wyze app offers more granular controls. If you have multiple strips, you can group them together to control them at once, or keep them separate to control individually. At the top of the app, there's an on/off button and a dimmer slider that lets you adjust the strip's brightness from 1 to 100%.

The rest of the features are organized into three main sections: Design, Scenes, and Music. In the top right corner is a Settings menu with options to automate your lighting.

In the Design section, you can manually select a color or white tone (1,800K warm to 6,500K cool) from a wheel, or pick one of the preset swatches.

In Scenes, you can pick from defaults like Night Light, Cozy, Bright, and Energized (all various shades of white), as well as a few more colorful options, including Energy, Gaming, Movie, and Meditation. Wyze offers these same default Scenes for the excellent Bulb Color, making it easy to coordinate your lighting scheme if you have both devices. And if none of these strike your fancy, you can create custom Scenes to tune your strip to your preferred white tone or color with a tap.

In Music, Wyze offers a number of customizable effects with names like Shadow, Leap, Flicker, Marquee, Color Focus, Water, Sea Wave, Shooting Star, and Starlight that make the Light Strip Pro flash like you're at a rave. The controller has a built-in microphone, so when you're playing music it will sync to the beat, a feature that worked nicely in testing. When you tap into the Music section for the first time, Wyze displays a warning for anyone who suffers from photosensitive epilepsy.

After selecting a Music effect, you can set the sensitivity to Low, Normal, or High; choose from additional options for how the light is displayed (these vary depending on which effect you choose); and select up to four colors or toggle on Auto Color, which creates a rainbow. It's a lot of fun to play with the various Music options; these features are really what set the Pro model apart from the standard version. In testing, I found they did a good job of syncing the lights with music.

If you're looking to create a party atmosphere at home, go for the Pro version, as the standard strip can only shine one color at a time and offers fewer lighting effects.

With Alexa and Google Assistant, you can use your voice to power the Light Strip Pro on and off, as well as to adjust its brightness and color. The virtual assistants also let you set up Routines to automate your lighting.

To connect the strip with Alexa, open the Wyze app, go into your Account settings, tap Smart Integrations, then follow the on-screen instructions. To connect it with Google Assistant, launch the Google Home app, tap the plus sign in the upper left corner > Set Up Device > Works With Google, then find the Wyze Home listing and log in with your Wyze credentials. In testing, I had no problem connecting the Light Strip Pro with both virtual assistants. The Light Strip Pro always quickly responded to voice commands such as, "Alexa, turn on my living room Light Strip Pro," and, "Hey Google, turn off my office light strip."

Wyze has a history of offering feature-rich and easy-to-use smart home gadgets at lower prices than the competition, and the Light Strip Pro is no exception. It significantly undercuts our previous Editors' Choice in this category, the TP-Link Kasa Smart Multicolor Light Strip, which costs $69.99 and is only 6.6 feet long. Other light strips we've reviewed, including the Eve Light Strip and the Philips Hue Play Gradient Lightstrip, cost even more. The Wyze Light Strip Pro makes it easy and affordable to add colorful accent lighting behind your TV, or along pretty much any other surface inside your home, for much less than the competition, earning our Editors' Choice award.

As for whether to get the Light Strip Pro or save a few dollars on the standard model, both versions allow for quick peel-and-stick installation, support app and voice control, offer a range of effects and automations, and have a microphone for music syncing. They can display millions of colors as well as a range of white tones, but the standard Light Strip can only shine one at a time while the Pro version can output up to 16 hues at once. If you just want basic accent lighting, you're probably fine with the standard version. But if you want to light up your room like a disco, spring for the Light Strip Pro.

The affordable Wyze Light Strip Pro lets you easily add a splash of smart, programmable accent lighting to any space and control it from your phone or by voice.