Selling Sunset season 5 on Netflix release date, cast, plot and everything you need to know

There's never a quiet moment at the Oppenheim Group and the Selling Sunset gang is more fractured than ever thanks to an epic showdown between Christine Quinn and Mary Fitzgerald.

With season five already on the way, the show has already teased that there's more fire – and even some romance – on the horizon for the girls.

Here's everything we know so far about Selling Sunset season five.

Selling Sunset season 5 release date: When will Netflix drop the next episodes?

Thankfully, season five has not only been confirmed, it's already been filmed. So unlike previous year-long gaps between Selling Sunset seasons, viewers won't have long to wait.

Teasing what's to come, a first look at the upcoming episodes dropped at the end of the season four.

As of January 2022, Netflix was still yet to announce the release date, but it's believed to be arriving in the first months of the year.

At least we have spin-off series, Selling Tampa, to keep us busy in the meantime, with the first season dropping in December 2021.

While everyone seems to get on, it quickly became apparent that there were several people within the company wanting to be in the top dog position, with fractures teasing one of the stars could open a rival firm.

Throw in a surprise pregnancy, and it really is all go!

Which cast members are returning for Selling Sunset season 5?

All of the cast members will be present in season five – including Christine Quinn, whose position at the Oppenheim Group was put into question in the season-four finale.

Despite driving off in her Lamborghini with husband Christian following a friendship-ending row with Mary, Christine has herself confirmed that she will be in "every single episode" of what's to come.

That doesn't mean that her relationship with the rest of the girls will be any better though.

In fact, in October 2021, she vented her frustrations about her co-stars on Twitter, accusing them of leaving her out of group photos and causing fans to fear she'd left the show.

"Got cut off and I'm soooo tired of addressing this," she wrote. "I am in every single episode of season 4 and 5 of Selling Sunset. The girls leave me out of photos. 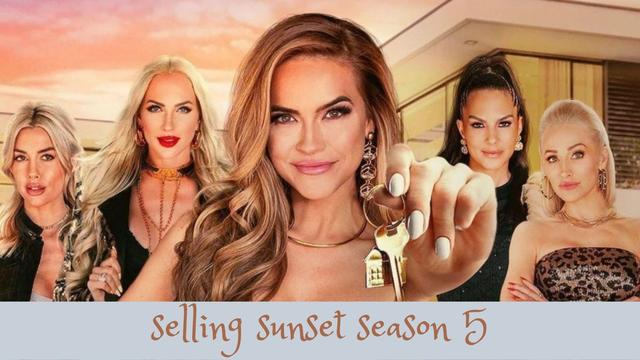 "I have real work to do besides sit on my phone and prove 24/7 that I’m filming a TV show. Y'all going to see me."

Alongside the message was a video of her in the Oppenheim offices, as the rest of the cast took pictures together while she sat behind them at her desk.

Unfortunately, newcomer Vanessa Vilella has confirmed she'll be missing from a large chunk of the series, as a result of battling Long Covid during the months-long shoot.

Catching up with Page Six recently, the season 4 newcomer addressed her absence from half of the forthcoming action, telling the publication: "Out of 11 weeks of filming, I was sick for five. I got COVID in August and we started filming right in that moment, so obviously they couldn't wait for me."

She revealed she'd been dealing with dizzy spells on set that caused her to be sent home, and added: "I'm still dealing with it. I was sick for too long and you're going to see a little bit of struggle with Vanessa in work."

This reality show definitely does not slow down – and we know that the new season will finally see Chrishell Stause and boss Jason Oppenheim's relationship become public knowledge.

Chrishell and Jason went public with their relationship in July 2021, sharing photos on holiday in Capri, Italy, alongside Mary Fitzgerald and her husband, Romain Bonnet, and Jason's twin brother Brett.

The gang will also head off on holiday to Greece when they hear the news, with Heather Rae-Young saying that it's "insane to her" and Amanza Smith saying that she "knew before they told her".

Chrishell also brushes off the criticism saying: "We're not criminals, we didn't do anything wrong", before sharing a kiss with her beau.

The couple had announced their split by December, around the same time that season five wrapped, so it's unknown if the show will see the rise and fall of their romance within the same batch of episodes.

Sadly, Maya Vander, who announced her third pregnancy during season four, revealed her baby was stillborn in December. In the upcoming episodes, she will still be seen pregnant and preparing for the child's arrival. It's not known how the team will address or edit this given the heartbreaking news.

There's also one major event of the girls' lives won't be shown – with Heather's wedding to Tarek El Moussa in October likely omitted from the upcoming episodes.

The reality star couple tied the knot in Paradise Springs winery in Santa Barbara, and filmed the run-up to their big day for Discovery+ special, Tarek and Heather: The Big I Do.

Initially, they weren't going to allow any filming to take place at their nuptials, with Heather writing on Instagram: "It took Tarek and I months to decide whether or not we were going to film our wedding and all of the planning, events, etc leading up to it and to be honest with you, we were leaning on the side of not filming it.

"A wedding is something so intimate to us and we didn't want any hate or anyone weighing in on our love but you are our community and we've taken you through so much in our relationship so we ultimately did want all of you to be a part of it."

Maya, Amanza and Christine were all absent from the event.

Selling Sunset season 5 trailer: When can I see it?

As soon as Netflix drop it, you'll see it here. We'd anticipate something fairly early in the new year.

In the meantime, enjoy the full trailer for Selling Tampa to see if that fills the hole in your life that $75million house has left behind.

Check back in for more updates.

Selling Sunset seasons one to four are now all available on Netflix.