Wouldn’t it be smart for San Jose to have blinking traffic signals? Roadshow

Q: I just returned from several months in Atlanta. We can all be glad that our roads are safer and better-maintained than theirs are. Then I noticed something nice when I got home and then (gasp!) began to miss Atlanta.

For several days the light at Sunol and The Alameda in San Jose was blinking red, like the signals in Atlanta. This was great! I was so overjoyed to see the signal was calming traffic without endless left-turn waits. Unfortunately, this light went back to its green-yellow-red signalling after a few days. Was this a trial? Busted circuit?

A: A wacky circuit.

When a signal is flashing red, treat it as a stop sign. This flashing red light can be activated when the controller equipment experiences power fluctuations or other potential concerns, which is what occurred at this intersection.

Due to safety concerns, only in rare circumstances does the city intentionally use flashing red light signaling. One case is for late night traffic, in which typically signals run in “free” mode. This is similar to a first-come, first-served operation, with the main movements holding green until a request from the side street occurs.

Back to Meredith and her Atlanta trip. 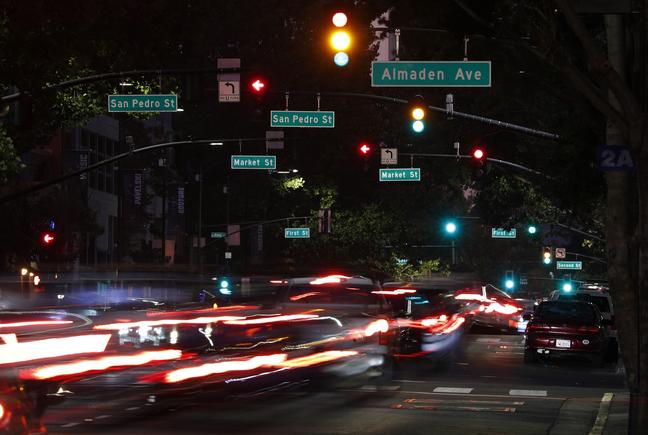 Q: I miss Atlanta’s widely used blinking green arrow, which indicates that a left turn can be made but must yield to oncoming traffic. What a time/gas saver, especially when protected left-turn signals are too short and a whole line of cars is stuck through the signal cycle, often slowing through lanes when the backlog of left-turners takes over.

There are many benefits: continuous traffic flow, half as much energy used in the light, less idling time for cars, and less wait time for pedestrians and cyclists. They could work really well at T-intersections.

Are there plans that might bring blinking lights in our future?

A: Perhaps. The city of San Jose uses flashing yellow arrows at several locations. These are installed on a case-by-case basis, normally due to unusual situations. For example, there’s one at Henry and Stevens Creek, and those at Fourth and Taylor and Fourth and Hedding help address high turn volumes.

Q: You can put me down as being like Mrs. Roadshow in turning off the radio when I have to park, find a place I have never been too, etc. Too distracting. … I definitely turn music down or off if I’m trying to do something that requires extra concentration. Definitely if driving in heavy freeway traffic or trying to navigate somewhere unfamiliar.

Join Gary Richards for an hourlong chat noon Wednesday at www.mercurynews.com/live-chats. Look for Gary Richards at Facebook.com/mr.roadshow, or contact him at mrroadshow@bayareanewsgroup.com or 408-920-5335.