Thread 101: What you need to know about this smart home protocol in 2021

Can you believe the Thread standard as we know it has been around since 2014? It’s true: It was just six months after Google purchased it that Nest worked with ARM, Samsung, and a handful of other companies to propose the Thread protocol. Technically, Nest was working on Thread as far back as 2011 to have a standard protocol for its own line of devices. Regardless, Thread is a protocol specifically meant to provide wireless mesh network communications for IoT devices.

Since then, so much and so little has happened with Thread.

Yes, Thread has evolved since that time and is one of the radio protocols that Project CHIP devices will run over.The CHIP effort has 145 partner companies by our last count, but we still only have a draft spec being circulated between them. And here we are in 2021 where the number of Thread devices available for the smart home is much lower than those available with Wi-Fi, Bluetooth, Zigbee or Z-Wave.

So why bring this up at all? Because after seven years, Thread appears poised to become a smart home standard. Assuming that 2021 is the year of Thread, it’s the perfect time to recap how we got here and why Thread matters.

Since its introduction, Thread has been based on device radios that use the 802.15.4 protocol. If that sounds familiar that’s because it’s the same one used by Zigbee. Like Zigbee, Thread is a self-healing mesh networking protocol, meaning all of the devices on a single mesh can speak to each other.

But that’s where the similarities end. Unlike Zigbee, Thread devices are IPv6 addressable, can speak to the internet (and each other) via native IP, or the internet protocol, and is a 6LoWPAN technology. That means all Thread devices will be able to communicate with other Thread devices, regardless of who makes them. The low power requirements mean Thread devices can run on batteries for a long time. And a Thread network can support a lot of devices: Up to 250, according to the Thread Group.

Having a Thread network for supported devices does require at least one “border router”, which functions as a bridge between IP data from Thread devices and the internet itself. It happens quickly because of the IP support: Thread devices speak the same language that traditional devices use to speak over the internet.

This diagram from the Thread Group shows the basic parts of a Thread network, including the mesh network, a pair of border routers, and the cloud:

I’m actually glad that the example image has a pair of border routers because it exemplifies another nice feature that comes along with Thread: No single points of failure. 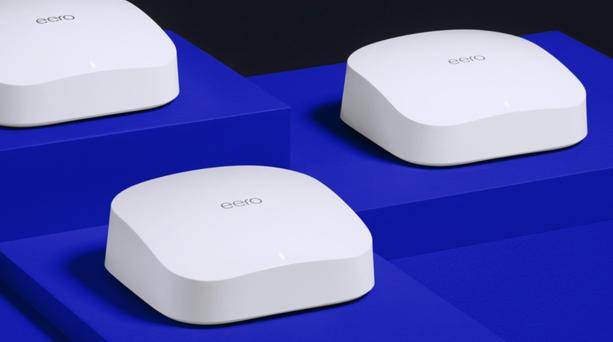 In the example, even if one of the border routers fails, devices on the Thread network can still speak with each other and the internet. Having a single border router would mean a single point of failure: Something to keep in mind if you incorporate Thread devices into your smart home.

What Thread devices are there?

At the moment, there is nowhere near the number of Thread devices as compared to those with Bluetooth, Wi-Fi, Zigbee, or Z-Wave. As noted, we expect this to change over the course of 2021 as Project Chip partners adopt Thread, which Amazon, Apple, Google and Samsung.

But there are a few “early” Thread devices that are new to the market or are older devices that have received a firmware upgrade to support Thread.

The Eero 6 Pro mesh routers I recently reviewed have an “Enable Thread” setting in the Eero app. So if you upgrade to newer Eero routers, they can act as the border routers you need for Thread devices. Google Nest WiFi units (the most recent ones) support Thread as does the latest Google Nest Hub Max.

So does Apple’s HomePod mini: It can be that hub for Thread devices, using its own Wi-Fi connection to get Thread device data out to the internet for remote access and monitoring. This is why we recently suggested using the HomePod mini as a HomeKit hub if you’re in the market: You’re future-proofing your smart home.

The currently available Nanoleaf Essentials bulbs and lightstrips are Thread-enabled as well, as are Eve Door & Window Sensors and the EU version of the Eve Energy smart plug. After that…. Well, there’s not much else just yet.

What benefits will Thread bring to the smart home?

I’ve already outlined some of the basic benefits of a Thread network: The self-healing, mesh network is a big part of that. But the benefit you’ll likely notice the most has to do with the device response time.

Thread latency — the time it takes for you to send a command to a bulb and have that bulb take action — is super low. Compared to devices that use Bluetooth, Zigbee, or Z-Wave, you’ll see near-instant response times.

This we know, having tested the Nanoleaf Essentials bulb, and because of tests like this one, conducted by Silicon Labs. You can see that even as the amount of data transmitted increases, a Thread network responds faster ones built on than other wireless technologies. And trust me: It doesn’t take much data to switch on a bulb or unlock a door.

What we don’t know is how the compatibility of Thread devices will play out by ecosystem.

Since Thread devices can communicate with their peers, regardless of who builds them, there’s a chance that we could see Google devices work better with HomeKit and vice versa. That’s going to depend on what comes from Project CHIP, where Amazon, Apple, Google, Samsung, and other smart home platform companies are members. Since Project CHIP handles the application layer on the Thread stack, it could be possible.

While that would be nice to see, even if it doesn’t happen, the benefits of Thread in your smart home are still worth it. You’ll get faster device response times, fewer potential points of failure and natve IP communication across your devices.

Want the latest IoT news and analysis? Get my newsletter in your inbox every Friday.