The TCP Smart WiFi Plug comes with its own app, but it’s also compatible with the Smart Life app, which provides compatibility with a wider range of products. General features remain the same between both apps, with scheduling, timing and some powerful automation rules. Overall, this small smart plug is decent, and although there are cheaper options available with more features, the four-pack version offer incredible value, making this a great choice if you need multiple smart plugs.

TCP products are all over the DIY shops, offering a cheaper alternative to many of the big-name brands. With the TCP WiFi Smart Plug, you get a small plug with an app that offers lots of features, although the product is much better value if you buy more than one plug.

It’s important to point out that product is compatible with the Smart Life app, letting it work with a wider variety of devices made by other manufacturers.

In my opinion, one of the most important considerations with a smart plug is its size – and in this regard the TCP Smart WiFi Plug is ideal. A small cube measuring 110 x 56 x 63mm, the smart plug easily fits into a double-wall socket without obstructing the other socket. 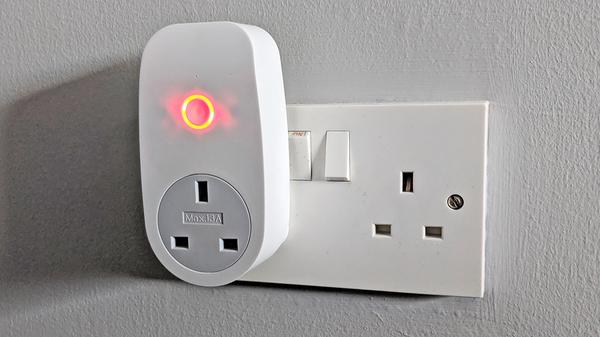 As is the case with most smart plugs, the TCP Smart WiFi Plug features a manual switch on the left that you can use to turn the plug on and off without diving into the app. However, its position makes it fiddly to reach if this plug is sitting in the right-hand side of a double wall socket, next to another plug. As such, I recommend placing the Smart WiFi Plug on the left, if possible.

Once connected to a socket and turned on, set up is via the TCP Smart app. Firing it up for the first time brought a sense of déjà vu, since it’s very much based on the Smart Life app; however, it’s been skinned to only allow you to add TCP products.

This is similar to Hey! products – the Hey! Smart Power Bar, for example – that also use Smart Life.

While it’s okay to use the TCP app, compatibility with the Smart Life app allows you to combine control of smart devices from multiple manufacturers in one place.

This makes even more sense if you want to use services such as IFTTT. To use IFTTT, you have to enable the Smart Life service, which then provides the option to select the brand you want to use: Smart Life, TCP Smart, Amarey Smart, GeoSmartPro, Homeflow and Hey!

Say, for example, you have both Hey! and TCP smart devices in your home and you use their default apps, you’ll only be able to use one brand or the other with IFTTT. Pick the Smart Life app instead, and everything sits in one place.

TCP Smart does provide its own skills for Amazon Alexa and Google Assistant, although the app clearly instructs you to select the Smart Life skills in both cases and then login with your TCP account details. Again, it’s just another reason to bypass the TCP Smart app and go straight to Smart Life.

In both cases, the interface and installation instructions are identical, taking you through connecting the plug to your Wi-Fi network.

Once in the app, you can give the plug a meaningful name. It appears on the app’s homescreen, with a toggle control, or you can tap the main entry to view a more detailed screen. This provides the same toggle option, plus some more detailed options that include a Timer (actually, a scheduler that lets you configure automatic on/off times) and a Countdown (actually a countdown timer).

Also available through the app are Tap To Run and Automations. Both are created in the same part of the interface, only you have to select Tap To Run as the Condition for the former. Tap To Run offers a manually triggered set of commands – say, turning on the smart plug and setting it to run for a certain length of time. The slider for Tap To Run only presents this time in seconds, making it difficult to work out how many minutes it will run for.

Nevertheless, such a command is useful. For example, in my best uses for smart plugs article, one option listed is for charging tools. With a Tap To Run, you can set the plug to come on and turn off automatically when the batteries are charged.

Automations are basically the same, only you set a different Condition to run them. Conditions can include outside influences – when the local weather drops below a set temperature or humidity, for example, or at a specific time (schedule), or when you leave or arrive at a location. The latter geolocation tool only works with a single device, so isn’t much cop for multi-user households.

Conditions can be based on other devices, too – say, when the TCP motion sensor detects movement. This is another reason to use the Smart Life app, since you’ll likely end up with a wider choice of products to automate.

Should you buy the TCP Smart WiFi Plug?

It is the scenario in which you wish to use your smart plug that will largely guide your decision over which you buy. For most people, the TP-Link Kasa KP105 is the better choice – it’s cheaper for a single device, has a slightly more user-friendly app and it integrates with Samsung SmartThings.

Those requiring Apple HomeKit support should opt for the Philips Hue Smart Plug, plus you can control this with Hue accessories such as the Dimmer Switch. For further options take a look at my guide to recommended smart plugs.

However, given that the TCP Smart WiFi Plug works with Alexa, Google Assistant and IFTTT, and it can be used in the Smart Life app, it remains a decent option. It comes into its own with the multi-pack, where it offers exceptional value. If you need four or more plugs, it’s a great choice.