A pungent smelling, pickled pasture, wrapped in plastic with no expiry date has been labelled a 'superfood' for cattle and sheep.

Much like the idea of using vinegar to preserve food, silage is pickled over an extended period of time.

The beauty is - as long as air is kept out - it can be stored indefinitely without losing its quality.

While silage has more commonly been used in dairy farming, more cattle and sheep farmers have made the switch.

So what are the benefits farmers have found in silage?

And how does it compare to hay?

Smart Cow consultant and silage expert Dr Dario Nandapi said there was a "double-whammy" in the benefits of silage.

SILAGE provides a "double whammy" with benefits in both nutrition and low fibre count.

That is according to Smart Cow Consulting consultant Dario Nandapi, who said many farmers chose silage over hay because it was a "better quality feed with higher levels of energy and protein".

Dr Nandapi said it was also lower in neutral detergent fibre, meaning animals could eat more because of the low fibre count.

CSIRO has outlined four phases of silage making, which include the aerobic phase, fermentation phase, stable phase and feed out or aerobic spoilage phase.

Once the fresh material has been harvested, chopped, compacted and well-sealed, the ensiling process begins and undergoes four phases.

What's the secret to making the best silage?

Ask Dr Nandapi and he would tell you, there isn't one - it is all pretty simple.

"The key is cut it early, dry it as quickly as possible and make sure it doesn't get rained on."

For maximum bulk - without quality loss - cutting is recommended at 10pc ear emergence.

"It will also leave enough stem for the pasture to regrow," Dr Nandapi said.

"The stem holds the sugar reserves for regrowth - if we cut too low, we lose the sugar and the rate of regrowth declines."

Some of the best silage Dr Nandapi has tested has been cut a second time.

Another recommendation was to cut mid-morning, after the early morning dew had lifted.

This was particularly important as there can be up to two tonnes of water per hectare in dew.

Once the silage has been cut it needs to be dried.

Plants close their pores (stomata) within 30 minutes to two hours of being cut in an attempt to reduce water loss and "stay alive".

When this happens the drying rate slows considerably.

"Teddering straight away can improve drying by 30-60pc and make a difference to the ME (metabolisable energy) content," Dr Nandapi said.

"We want it to dry as quickly as possible to concentrate the sugars, which are then converted to lactic acid by bacteria."

Once the pH drops below 4.5, bacteria is killed and silage stays in that form until it is exposed to air again.

In summary when it comes to silage, oxygen is the enemy.

To keep oxygen out it is important to compact the silage in a pit or bale.

This should be sealed as soon as possible to maintain the quality of the feed.

Dr Nandapi recommended a turnaround time between cutting and baling of 24-72 hours for silage and hay respectively.

For most hay producers 72 hours seems impossible, so some are now increasing silage production because it requires less dry matter content before baling.

When it comes to storage drought pits are the most popular choice as they are longer lasting.

In comparison, the round silage bales tend to only last a year.

Silage has proven to store better than hay if conserved properly.

Total losses of silage are around 15pc compared to an average of 30pc loss with hay stored in a shed.

Plastic treated with an ultraviolet (UV) light inhibitor is preferred when it comes to covering silage filled pits, which should be entirely covered with 10 to 15cm of soil for protection from direct sunlight.

When using the UV treated plastic, it must be weighted with tyres cut in half or sand bags, to maintain plastic close to the silage, preventing air entry and movement under the seal.

Plastic edges are folded over and buried to keep the entire storage airtight.

"I think six layers of plastic is needed to wrap round bale silage with at least 50pc stretch and 50pc overlay," Dr Nandapi said.

"Compacting the pit silage properly also concentrates the sugar, so there is that better pH drop."

All the major forages including grasses, forage legumes, tree legumes and by-product forages can be stored as silage.

However, Dr Nandapi found pasture was the best option as there was no compromise between yield and quality.

In comparison, while cereal silage is also of better quality when harvested earlier, it records a lesser yield because - unlike pasture - it does not grow back.

Dr Nandapi said another advantage of silage was less wastage.

"With hay there is leaf shatter when it dries out," he said.

"By the time you factor in all your field and feed out losses you lose more.

"You also aren't going to forsake yield by making silage."

A COUPLE of years ago, feeding silage to sheep was unfamiliar territory to third generation Rosa Glen farmer Kylie Silverthorne.

Kylie Silverthorne, Rosa Glen, cut 150 round bales of silage in 2022 and is feeding out the last 80 bales this year.

That was until she became involved in the South West Catchment Council's Grazing Matcher program and became aware of the feed's nutritional benefits. 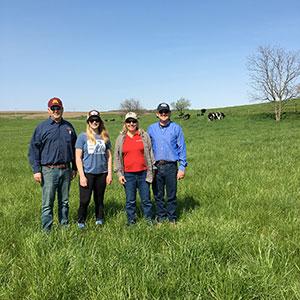 Through the program Ms Silverthorne learned how silage could help increase productivity and efficiency of her family's 2300-head Corriedale flock.

"I knew about silage, but I thought it was just feed for dairy cows," Ms Silverthorne said.

"I didn't think it was for sheep."

What appealed to her most about silage was the high nutritional value it offered.

Previously, she was feeding pure hay.

"It (silage) is green, good for gut health and high in protein and energy," Ms Silverthorne said.

"It also has higher moisture, which complements dry summer feed.

"It ticked quite a few boxes."

Ms Silverthorne fed silage for the first time last year and was already seeing benefits in the condition of her flock.

This year, Ms Silverthorne trialled a lupin-silage combination at joining to see whether or not it resulted in increased conception rates.

Not only that, but silage had proven itself as the preferred choice against hay.

Four weeks ago, Ms Silverthorne started feeding the silage-hay combination to her ewes and noticed it was much the same story.

She uses round bale silage, which is stored in sausage wrap and spread out across the property to be fed out using a feeder.

"They all seem to be eating the silage very quickly again," she said.

"Earlier this month, I took the rams out and bought the ewes in - they are all looking bright eyed and in good condition."

Typically, in the months before pregnant ewes are due to drop, more lupins are introduced to their diet for additional energy and protein.

However, this year Ms Silverthorne started feeding silage and lupins earlier through joining in January.

She said this was to see whether or not conception rates were higher and results would not be known until April.

"It has been a bit of trial and error," Ms Silverthorne said.

"I am still figuring out whether or not I can just feed the sheep silage or if I need to supplement with cereal grain earlier on."

Meanwhile, lambs eat a rotation of silage (at the start of the week) and lupins (during the remainder of the week).

Ms Silverthorne found it to be a good combination with both sources of feed complementing each other.

Much like the ewes, she has seen benefits in the condition of the animals.

"Sometimes you might notice they appear sunken in the belly or like their wool is slightly off colour.

"But at the moment they all look pretty good."

Ms Silverthorne added that while silage was slightly more expensive than hay, the cost balanced out in the fact the feed had higher protein and energy content.

She said a downside was the waste, as silage bales were wrapped in plastic with additional plastic rope wrapping the outside.

For Bowie Beef farm manager Matt Fairbrass silage is a "no-brainer" when it comes to feeding his cattle.

FOR Bowie Beef farm manager Mat Fairbrass, silage is a no-brainer when it comes to feeding cattle.

Mr Fairbrass joined the cattle operation at Bridgetown four years ago, after making the move from the dairy industry.

At the time Bowie Beef was feeding pure hay, but Mr Fairbrass wasted no time in introducing silage in his first season.

Mr Fairbrass said one of the main benefits of silage was it only needed three days of fine drying weather, whereas hay needed up to two weeks.

"It is easier to work with the weather when making silage," he said.

"You aren't trying to find two weeks of fine weather to dry the hay."

Another benefit Mr Fairbrass has found in silage has been the higher levels of protein and energy.

This helped weaned cattle gain weight before they were sent to the feedlot.

Mr Fairbrass said with hay - unless it was "absolute you beaut hay" - weight could only really be maintained.

"Our silage protein normally comes out at 10.5 to 11 megajoules of energy and 15pc protein.

Bowie Beef produces anywhere between 2500-3000 rolls of silage a year, which is fed out to over 1000 breeders.

"So there is quite a difference."

The cattle operation calves in April and May.

"We start feeding them as they start calving," Mr Fairbrass said.

"So we feed pure silage, until we have green feed on the ground.

"We only produce oaten hay for roughage and then the cattle go onto the green feed with the oaten hay.

"During summer, they only eat silage."

He added that a sacrifice paddock was used once there was a break of season, until the grass was ready to graze at the three-leaf stage.

This allowed pasture to establish, resulting in better winter and spring growth.

"We lock the cows in a sacrifice paddock for four to six weeks, feeding silage until the pasture is ready.

"This is where being able to maintain cow condition on silage is a great tool."

Over the years, Mr Fairbrass has noticed more beef farmers making the switch to silage, particularly when there have been later breaks in the season.

He believed this was because it provided a reliable source of feed in less favourable conditions.

"There's also the fact there is not as much waste.

"If you feed hay versus silage, cattle always clean up the silage, but if you are feeding pure hay they waste at least 10 or so percent of it.

"Overall, silage is a no-brainer really."

Want weekly news highlights delivered to your inbox? Sign up to the Farm Weekly newsletter.