See How This Experiential Agency Brought the Northern Lights to NYC

Want more content like this sent directly to your inbox? Then sign up for our brand-new BizBash Experiential monthly newsletter to stay in the know on the coolest, most creative ideas for engaging consumers and attendees!

NEW YORK–Taking “cutting edge” quite literally, local creative agency BMF, in partnership with Hudson Yards, created “Skylight,” an interactive observatory arena where guests experienced 360-degree views of the Manhattan skyline at Edge, an observation deck 100 stories above the city. Transcending a perfect photo op into something hypnotic, once on the observation deck, northern lights danced across the New York City horizon.

Austin Connor, account director at BMF, said the inspiration to bring the Icelandic aurora borealis to NYC at Edge came from brainstorming “things that we ourselves would be interested in experiencing,” adding that Edge already “invites guests to ‘stand in the clouds,’ [so] we started thinking about the winter sky and our creative strategy team’s experiences.”

“Before taking a 52-second elevator ride up to Edge on the 100th floor of 30 Hudson Yards, guests experienced the multiroom ‘Journey to Edge,’ which told the history of Hudson Yards,” Cassie Davison, vice president of marketing at Hudson Yards Experiences, told BizBash.After ideating with BMF, Smart Department Fabrication constructed an immersive photo booth, where guests could capture content under a blue-lit cloud before heading out to the observation deck.Photo: Courtesy of Edge 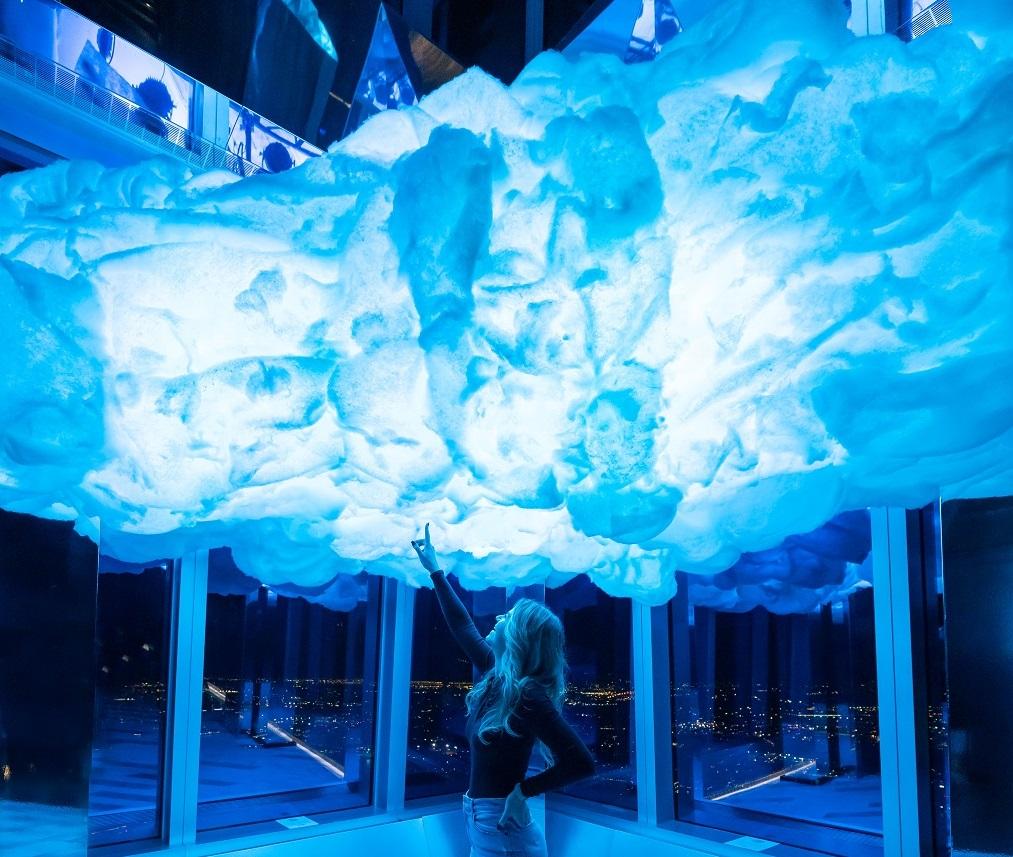 Designed as a walk-thru exhibit from March 3-7, the presentation began at the construction site of the westside skyscraper (which was built above a 10-acre platform of concrete and steel) and ended at 1,100 feet in the air—on the highest outdoor sky deck in the Western Hemisphere.

“Prior to turning the corner toward the outdoor portion of the sky deck, guests encountered a large-scale cloud display and light projection they could walk through and capture content within,” Davison explained. The immersive photo booth by Smart Department Fabrication showcased blue-lit clouds suspended in front of floor-to-ceiling windows. Davison pointed out that “social engagement was the most helpful in gauging the guest experience at Edge,” adding that throughout the five-day Skylight experience, she “definitely saw an uplift in social mentions.”

Patrons could also stop by one of the indoor bars for a themed cocktail. Curated in partnership with Absolut Elyx, selections included the smoky Aurora, complete with a lit-up ice cube, and the Cloud 9, which was garnished with marshmallow cotton candy (also known as “fresh clouds from Edge”).

Drink in hand, guests were led through revolving doors and out onto the observation deck, where four 20-minute shows at 45-minute intervals brought the northern lights to life from 7-10 p.m., when the night sky was dark enough for a perfectly lit cityscape.

Before taking a 52-second elevator ride to the 100th floor, guests walked through "Journey to Edge," an exhibit teaching the history of Hudson Yards—beginning at the construction site of the building atop a 10-acre platform of concrete and steel.Photo: Shannon Thaler/BizBash

Despite a number of indoor, photo-worthy moments, BMF aimed to create an outdoor experience that couldn’t be captured in a photo—just as it would be if you were observing the northern lights in real life. “We wanted to recreate that phenomenon,” Connor said. “We wanted attendees to be present, and not just experiencing it through their phones. Edge is already an incredibly stimulating environment with its jaw-dropping views, [so] for us, it was about enhancing that in a way that added value to the experience, to make it even more visually arresting.”

When asked how BMF could bring such a foreign phenomenon to NYC, Connor said, “BMF worked with a local light designer [Evoke Collaborative] to explore new technologies that allowed us to create the illusion of the northern lights. There’s a lot to consider when creating an outdoor activation, especially 100 stories above Manhattan. We really had to work with the wind, something outside our control, because the activation relied heavily on even distribution of fog to capture the lighting effects. Testing and learning, we adjusted each night the activation was open to ensure we were optimizing the experience with the constantly changing winds and weather patterns.”"Edge is already an incredibly stimulating environment with its jaw-dropping views, [so] for us, it was about enhancing that in a way that added value to the experience, to make it even more visually arresting," said Austin Connor, account director at BMF.Photo: Courtesy of Edge