Retro Pixel Racers review: Challenging, but not in a good way

Give yourself your own John McEnroe moment. “I CROSSED THE LINE!”

Do you like a good challenge? If you enjoy this website, the answer is almost certainly yes. Striving to better your lap times and master each corner is what virtual racing is all about. Retro Pixel Racers is technically all about that too, but this isn’t a ‘good challenge’. A good challenge is fair; this is not.

Retro Pixel Racers is a retro-styled, top-down racing game for one player only, which is very odd, seeing as top-down racers are loads of fun in multiplayer because everyone’s fighting the same battle against the perspective and the environment.

But here you’re just given 13 tracks (not the 26 advertised) to first drive in a race against five other cars, before tackling the same track again in an insanely tough, time-limited checkpoint sprint. Complete 5 laps without pulling your hair out and you might get lucky and proceed.

Why only might? The finish line is fuzzy. Fuzzy as in you’ll cross it with more than half a second to spare, drive up the road and then be told you ran out of time. Fuzzy as in you don’t actually feel like the race is over because there’s no chime or fanfare, and the announcer still says ‘Time extended’, as time is visibly added to your clock.

Only then does the screen fade and you’re then presented with the result. It’s also worth noting you HAVE to finish every event sequentially or you can’t progress. Good luck getting seeing events 11-26, as event 10 is a nightmare. 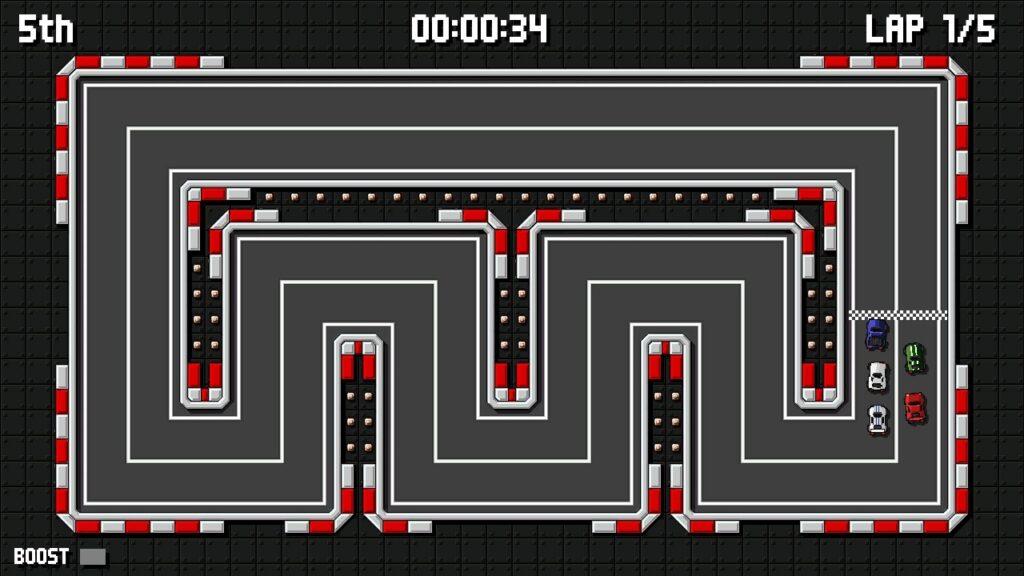 Then there’s the way your car doesn’t move like everyone else’s. With one vehicle consistently screaming away to the win, I chose an identical vehicle, only to discover that the computer can clearly turn in faster than you can.

It’s there flicking the rear into a drift, while you slowly rotate on your axis, hoping to avoid touching the wall and coming to a standstill. There’s no drift button, double-tap or brake/gas simultaneous press to flick it – it just won’t do what the computer does.

Perhaps to make up for this, only your car has a turbo boost (yes, that is crazy), which uses a gauge that fills up over time. You can fire it as soon as it turns red, but the fuller it is when you do, the longer you’ll have crazy speed. This is necessary, otherwise, you’d just never win. And all this is with a capable vehicle.

Other cars are either too slide-y to navigate the turns without crashing or simply aren’t physically fast enough to get around the lap before the timer runs out.

So is there any fun? Well, nailing a line through a series of corners can be satisfying, and finally beating an event elevates your ego a little. But the game somehow gets less fun as you go, as the tracks simply squeeze more hairpins into the single-screen raceways, and the time limits get harder. The game can be completed in one sitting, and all there is to do after that is to choose ‘Erase Data’ and start again.

Graphically it’s smart and clean, with a nice high-res zoom-out before each race, and the music sounds like Horizon Chase, which I love, though it gets repetitive rather quickly.

The UI is clunky, always resetting to Race 1 no matter which one you just played, and post-race screens can’t be skipped, making it quicker to accept you’re about to lose, pause and reset, rather than going back out and in again via the game’s event menu.

It really wouldn’t be hard to make this worth buying as the aesthetic is fine. A 4-player local multiplayer mode (especially on Switch) is the obvious thing it’s lacking, along with tighter finish line detection, maybe some championships with characters for the AI drivers, or a track designer mode.

As it is, it’s bare-bones in the extreme. It can be as challenging as chasing golds on Gran Turismo 7’s license tests, but I hope nobody uses that for a quote in an advert because I definitely do not recommend this game in any way. In this state, it’s just not good enough.