Panasonic is bringing the same tech that’s in its air conditioners to a device that can stay overnight in a hotel with you or travel alongside you in a taxi.

The company has introduced the Portable nanoe X Generator. Weighing 400 grams and measuring 170 mm x 90 mm x 66mm, you should think of it as a personal air purifying device.

According to Panasonic, the portable purifier sees the company leverage its nanoe X tech that inhibits indoor pollutants and odours in the air and on surfaces through the release of nano-sized, atomised water particles.

It’s the same tech that can be found in Panasonic’s air-conditioning range.

Panasonic says the nanoe X technology inhibits up to 99 per cent of indoor pollutants such as viruses, bacteria, mould and allergens and reduces odours for fresher, cleaner air.

The pitch from Panasonic is that you can take the Portable nanoe X Generator to your office, but also have it head home with you in a taxi. They also said you can take it to a café. It’s really targeted towards those staying super safe during a pandemic, eh?

How do you know if it’s working? Should the air smell different? Well, Panasonic says the blue indicator light will tell you the nanoe X is operating, for starters. They also said that as the device inhibits harmful pollutants and common odours, your air should in fact smell different. 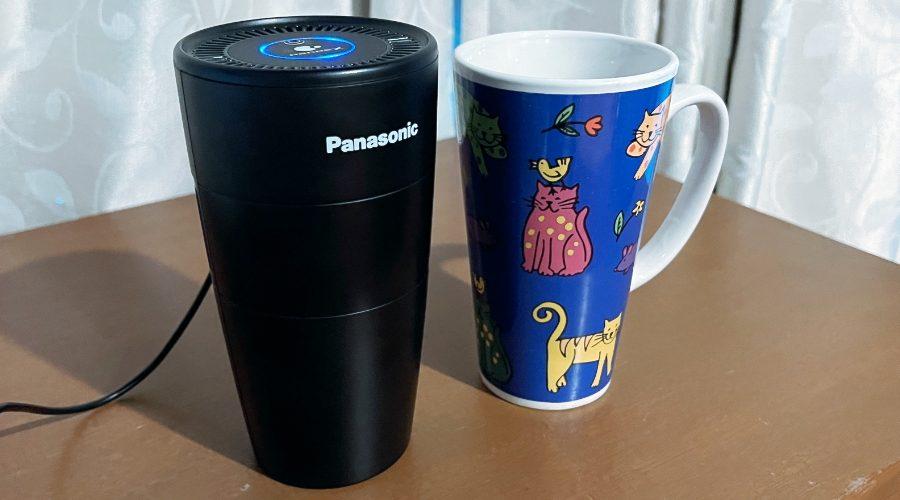 I can get around the idea of using the device at my desk at work, but this obviously raises concerns over how far the purification can actually stretch. Panasonic reckons you’re looking at a space of around 2-3 cubic metres.

It’s sitting here next to me now, in an open plan office. And I mean open plan. Not the best environment to test, but it’s all I have right now.

Turning the device on is pretty straight forward – there’s an on/off button on the top.

The Portable nanoe X Generator upon turning on kind of gave off a plastic smell – but that was gone within a minute or two.

Once on, the purifier was a little louder than I’d like. It wasn’t quite humming, more like you could hear a fan spinning? While it wasn’t as loud as some PCs I’ve used in the past, this wasn’t a sound I could drown out with music.

To charge, you remove the back of the device and plug in the cable (USB-C into device, USB into laptop/USB port, etc). This is super neat – it’s actually my complaint with a lot of portable tech, that you have an ugly plug hole – but you can’t see the USB-C hole and it leaves the Portable nanoe X Generator looking clean.

I guess the air smells better.

While it’s not as camouflaged as this air purifier table from IKEA, looking like a travel mug is a pretty smart idea. Would I carry it around with me to purify air? No, but I’ve never used an air purifier before. It fits in my bag quite easily, so I could use it.