What do you get when you fatten up a Bluetooth speaker? You get a boombox, or at least a modern take on that icon of sonic portability from yesteryear. Monster has long made a habit of going big on both design and sound by focusing on moving a crowd with a rumbling boom above all else.

That’s why the Monster Blaster 3.0 seems so apropos for the company. It’s a third-generation boombox with 120 watts of power for any party, but how worthy is it beyond just being able to blast tunes outside?

What’s in the box

Despite the size of the speaker and the box, there’s not much to unearth from it. Apart from the speaker itself, you get a power adapter with a charging cable, along with the user manual. Monster doesn’t include any other cables in the box, even a 3.5mm cable despite support via the Aux-In port in the unit itself. If you have one kicking around, it will work just fine with the Blaster 3.0.

The Blaster 3.0 comes in three colors: Black, white, and red. My review unit was black, but I would say the red is much more of an eye-catcher. There are no functional differences between them apart from the aesthetics, but if you did want to make the sound even more visually noticeable, red would probably be the way to go.

Under the surface, Monster equips the Blaster 3.0 with dual 60-watt speakers, along with two passive radiators and a 60-watt woofer for the bass. There is no real “front” or “back” to it, as the speakers face in both directions for broader output, especially when you start cranking up the volume. Monster doesn’t provide a way to articulate or consolidate the sound to push in either direction, so if you do plant it close to a wall, you may lose some of the spaciousness that sound can otherwise deliver.

You do get some ports to work with, like the Aux-In jack for 3.5mm cables, as well as a separate 3.5mm port for microphones.

Controls are pretty standard, with an on/off button, plus volume buttons. The mode button only really switches between the indoor and outdoor modes, where Monster’s Environment EQ feature kicks in to optimize audio for either setting. The Blaster 3.0 doesn’t come with any dedicated app support, giving you no flexibility to tailor the sound how you might want.

You do get some ports to work with, like the Aux-In jack for 3.5mm cables, as well as a separate 3.5mm port for microphones. If you plan to do some karaoke with this thing, that’s certainly possible under this setup. The mic works over music playback, allowing anyone with a plugged-in mic to sing with a tune, or announce something if playing the role of emcee. Technically, you could use the microphone jack without any music in case you need to do a presentation of some kind. Without a built-in mic, the Blaster 3.0 doesn’t function as a speakerphone.

The USB port treats the boombox as a power bank, letting you charge up portable devices whenever you need to siphon some juice from its 5,200mAh battery. The only other ports are the AC adapter port and a reset switch.

The rubber flap that covers and protects the ports is of limited value when it comes to durability. The Blaster 3.0 comes with an IPX5 rating, so while you can take it to the pool or beach, you do have to be careful. Getting sand out of its many crevices won’t be easy, and saltwater will almost certainly kill it.

The Blaster 3.0 weighs a moderate 13 pounds, though the very sturdy handle should keep it from slipping out of your hands. Rubberized feet underneath keep it slightly elevated, and Monster says they dampen any vibrations that could lead to surface distortion. 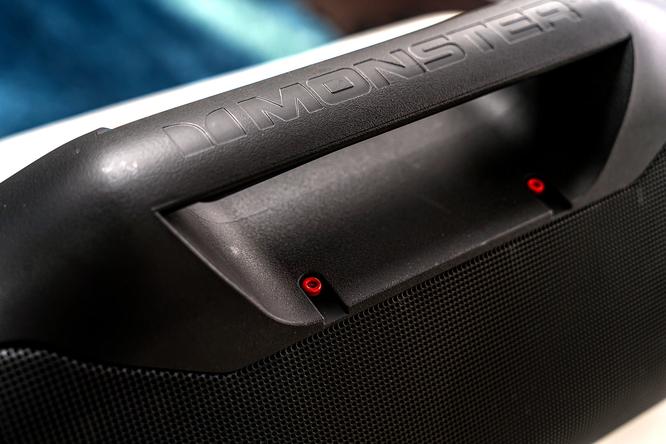 It was super easy to get started. I could either pair the old-fashioned way by going through the Bluetooth settings on my phone, or using NFC to quickly tap and pair from an Android phone. The boombox works the same way with iOS and Android, so regardless of the pairing process, everything else is the same.

Audible tones and riffs indicate things like turning it on and off, pairing status, and volume or mode adjustments. Monster visualizes volume through eight LEDs on the control panel, giving you a clearer sense of just how loud or quiet the Blaster 3.0 truly is. As mentioned before, the mode button only really toggles the indoor and outdoor settings.

In many ways, this is a plug-and-play kind of speaker, at least in the wireless sense. Without an app to administer anything, nor a bevy of onboard features and components, it’s really about connecting a playback device and blasting audio from there.

Once you get to that point, the Blaster 3.0 really earns its name. This boombox can get very loud at just five LEDs (out of eight) on the volume scale — even more so in outdoor mode. What’s interesting is that the bass isn’t quite as thumping as I expected. Well, OK, I’m referring more to what it plays like under indoor settings, as the woofer clearly goes to work harder in outdoor mode, but restraint does show in other respects.

As you might expect, there is indeed a tipping point for distortion on volume — as there is for the bass response itself. What I mean by that is the bass audibly kicks up a notch when you raise the volume beyond four LEDs, faint distortion starts to creep in at six, and is then very evident at full blast. Still, it wasn’t as bad as I thought it would be, and it may be a sign that Monster is learning less sometimes leads to more in the grander scheme when it comes to how thick the bass should be.

Music sounds good, regardless of whether it’s just you or a group of people.

The key here is that the Blaster 3.0 maintains a certain degree of clarity throughout so that music sounds good, regardless of whether it’s just you or a group of people. It does sacrifice depth in the mids to highlight the bass and highs, but that’s not a knock against a speaker clearly not aiming to impress audiophiles. The point here is to be loud and vibrant, and when I think about how bass-heavy genres sounded on this thing, it’s easy to remember who the target is here.

The Blaster 3.0 fits right in for barbecues, pool and beach parties, parks and picnics, and pretty much any gathering in-between. You can certainly enjoy it in the private comforts of home, except there are plenty of speakers covering that. In true boombox style, this is every bit an outdoor speaker. The indoor part is just a bonus.

Despite its weight, it’s not hard to take with you on a road trip or to an event. In open spaces, it also has a more stable Bluetooth connection. Indoors, it can stutter sometimes, and I wasn’t always clear as to why. I could understand when the speaker was in a different room from the phone, yet it also happened when only 10 feet away in the same room. I tried this with different devices to eliminate the possibility that the speaker wasn’t at fault, only to find it happened regardless of what I paired with it.

Monster rates battery life at up to 12 hours per charge, but that’s never going to happen the moment you start increasing the volume. I recognize Monster has to apply a number to how long the Blaster 3.0 will last per charge, but it also markets the boombox for what it is: A loud speaker.

No matter what, you’re not getting as much battery life here as you probably should.

You can get a handle on how much life you have left from the charging LED on the control panel. Once it turns red, look for an outlet to plug in. There is no fast charging here, and it takes a good 3.5 hours to go from dead to full again. You can squeeze more life out of it if you plug in a device via Aux-In, but no matter what, you’re not getting as much battery life here as you probably should.

The Blaster 3.0 comes in at $400, so you would want to put it to good use and have it last a while. It’s not exclusively designed to work outside, but that has to be a major reason why you would spend this much on a Bluetooth boombox. It won’t disappoint a crowd looking for booming tunes while spending the day outdoors, though it also does the job if you’re stuck indoors, too.

If you’re looking for something akin to what a DJ might use, the JBL Partybox 110 might be a good fit for the same money. It’s far less portable, mind you, but it does come with a fancy light show and pumps out 160W of power. If you prefer something closer in appearance, JBL is coming out with its Boombox 3 in the summer, and while it will cost extra at $500, the company is claiming a 24-hour battery life and giving it an IP67 rating for water and dust resistance. Plus, it will be compatible with JBL’s PartyBoost feature so you can pair it with other JBL speakers to spread out playback.

For a stylish option, the $400 Marshall Tufton only packs 80 watts of power, but it has a 20-hour battery, an aux line-in port, and that undeniably cool Marshall guitar amp look.

Not to be outdone, Sony already threw its own SRS-XG500 boombox into the mix at $450 that offers IP66 water and dust resistance, plus an app to tweak the audio profile in case you want to change it. If money is an object, Anker’s Soundcore Trance is a smaller, $150/80-watt party box with a handle that also offers a light show and a claimed 18-hour battery life.

That may largely depend on how you and your friends treat it. Modest durability means you do have to be mindful of who or what comes into contact with it. Sand and salt are the biggest dangers, whereas the odd splash of water should be fine. Monster offers a one-year warranty to cover malfunctions, but not damage from water or sand.

Yes, but only if the Blaster 3.0 checks the right boxes for you. It can be flexible as to where you use it, though not as much in its feature set, and that matters when paying this much for a speaker. Your friends and family won’t have any problems listening to its booming sound. If that’s enough for you, then you’ll know what to do.