Lenovo Smart Clock 2 review: A smart display with tools that are perfect for your bedside

Lenovo has done a great job of cornering the Google Assistant-enabled small smart display market. The first Lenovo Smart Clock launched in November 2019 as a solid budget option. Its successor, the 2020 Lenovo Smart Clock Essential, lacked a touch display but gave you a cheap smart assistant for your bedroom. Now, Lenovo is giving the two-year-old Smart Clock an update with the new Lenovo Smart Clock 2, and it's bringing a friend with a new dock.

I owned two of the original Lenovo Smart Clocks for about 18 months. They served their purpose, but it became clear to me that a few areas could be improved. With the Smart Clock 2, Lenovo aimed to do just that: it adjusted the form factor a bit and introduced a dock that bundles a wireless charger and a nightlight. But are these adjustments enough to make the Lenovo Smart Clock 2 a true upgrade? Let's dig in and find out.

The Lenovo Smart Clock 2 was announced in June 2021 but didn't begin selling until September 2021. The Smart Clock 2 launched at Best Buy for $89.99 with the charging dock, but you can now purchase the smart speaker at more retailers like Walmart, B&H, and Lenovo's website. The Smart Clock 2 is currently available in two fabric colors, Heather Grey and Abyss Blue, with Shadow Black coming in the future.

The Lenovo Smart Clock 2 keeps a lot of what worked for its predecessors, like the attractive fabric finish on the body of the device and a serviceable 4-inch display. However, in the process of revising the unit for its second go-around, the overall shape of the device got taller with less overall depth. This was done to move the formerly rear-firing speaker to face forward — and it's a much-welcomed change.

While the new Lenovo Smart Clock 2 still uses a 1.5-inch 3W speaker, the redesigned shape of the enclosure and new front-facing placement helps it sound far better than it should. Am I saying that this will be your next party speaker or that it's going to rattle the table with deep bass? Definitely not. But it is more than capable of providing some good-sounding tunes while getting ready for the day, sitting in your office, or waking you up in the morning.

Then there's the display, which is still 4-inches. I find this to be a great size for sitting on the corner of your office desk or nightstand. Thanks to the built-in ambient light sensor, the screen will automatically adjust brightness depending on the light in the room. It gets plenty bright for indoor use but not enough to handle direct sunlight. On the flip side, it will dim down to a level that won't be distracting in a dark bedroom.

The back of the Smart Clock 2 is where you will find a physical switch to disable the microphone, along with the port to plug in the power cable. What you won't find is the USB-A port on the back of the original Smart Clock. Instead, Lenovo decided to move that feature over to the new dock.

Aside from moving the USB-A charging port to the new dock, Lenovo also included a nightlight and wireless charging pad. The dock gets its power from the Smart Clock 2 via Pogo pins that make contact when the two are connected. Connecting the smart display to the dock is as easy as lining up the two raised rubber nubs with the indentions on the bottom side of the clock. 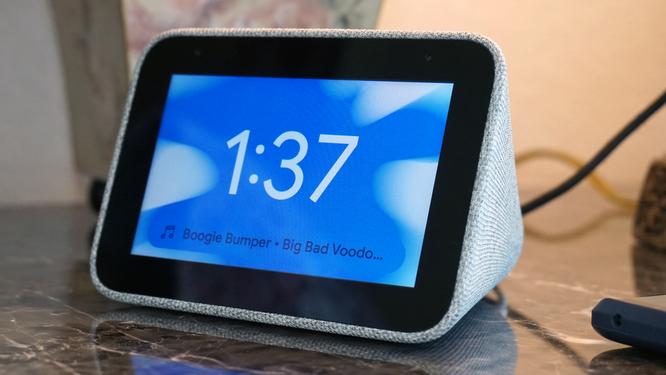 My favorite feature that the dock brings is a wireless charging pad. Supporting up to 10W charging, it's more than enough to get my phone topped up before the morning. Combining my bedside clock with my phone charger goes a long way towards reducing the clutter on my bedside. And I also appreciate that Lenovo kept that USB-A port from the original Smart Clock. It's handy to plug in the charger for my TicWatch Pro 3 smartwatch.

Of all the features that the dock brings, the most unique and perhaps most welcomed by some would be the nightlight.

Swiping down from the top of the display on the original Smart Clock revealed a "nightlight" option, but that only converted the display into a warmer, brighter color. When the Lenovo Smart Clock 2 is docked, and you turn on the nightlight in the same manner, a nice glow appears below the clock. While the light isn't bright enough to illuminate an entire room, it is enough to help you find something by your bedside or safely navigate back to bed.

But since this is a Google Assistant-enabled smart speaker, you'll also have all the smart home commands and help that the digital assistant offers. From turning on your smart lights to asking for your favorite playlists or relaxing music to sleep to, it's all possible with the Smart Clock 2. The Google Assistant can also help turn the nightlight on the dock off and on — when it works.

For a small smart display with Google Assistant built into it, the Lenovo Smart Clock 2 does an excellent job for the tasks it's designed to do. The utility of the device goes up even further when it is paired up with the dock. However, there are a few small faults that keep the setup from being perfect.

Maybe the most frustrating issue for me was that sometimes the nightlight wouldn't shut off. Placing my phone onto the charger, the nightlight turns on for a few seconds, then off — every time. But when I manually turned the light on using the display, I could only get it to turn off about a quarter of the time. Pressing the nightlight button again only took me back to the home screen with the light still on.

I could sometimes get the light to turn on and off with Google Assistant. But when it's dark and my wife is asleep, and I'm trying to go back to sleep, the last thing I want to do is have the light refuse to shut off. Sometimes, I just gave up and removed the clock from the dock, which meant the wireless charger stopped working along with the nightlight.

Speaking of Google Assistant, it works as expected with the Smart Clock 2. The microphones do a good job of hearing the hot word and deciphering my commands. The problem is that, at times, it took a long while to complete the task or respond to a command. At times it would take close to a minute of the device thinking — or acting like it was still listening for me to finish my command — before it would move along to completing what it was asked to do.

I'm not sure if this slow-down is a software-side glitch or a hardware constraint. Google Assistant doesn't require heavy-duty processors or a lot of RAM to operate on the consumer side. But the issue may be on the MediaTek processor side, the Smart Clock 2's software, or perhaps a combination of the two. Regardless of the culprit, the delays weren't constant but were exasperating when they happened.

Finally, my last issue is Lenovo's choice to remove the USB-A port from the clock itself. While the clock is likely to be used with the dock most of the time, you'll be missing out on a charging port if there is an instance where you don't have the space for the dock. It's a minor issue, but it would still be helpful for that port to have remained on the clock.

If you're looking for the best smart speakers on the market that offers small displays, you won't find many outside Lenovo's lineup. If you don't need a screen for smart home controls or visual information from Google Assistant, then the Lenovo Smart Clock Essential may be perfect for you. But if you do, then there are only two options to consider — though none have a dock for a nightlight or wireless charging pad.

For a smart display that has a small footprint on your tabletop — though not as small as the Smart Clock 2 — then a great choice to look at is the new Nest Hub 2nd Gen. It makes an even better photo frame with its higher resolution screen and larger 7-inch display size. It automatically adjusts brightness and even changes the color temperature of the screen for more natural reproduction of images based on ambient lighting. Although it dims down quite a bit, it may still be too bright for some as a bedside companion since it's a larger panel. Of course, since it's from Google, it has all the smarts from Google Assistant built-in, but it also has radar for sleep tracking when placed on your bedside.

If you are in the Amazon Alexa camp, you might want to look at Echo devices — specifically the Amazon Echo Show 2nd Gen. The display size is similar to that of the Smart Clock 2 but an inch larger at 5-inches. You'll get Alexa built-in for your smart assistant for answering questions, playing music, and controlling smart home devices. The Echo Show 5 does have a camera that you can use for video calls, but there is a physical slider that can cover it up if you don't like having it pointed at you while sleeping.

Lenovo Smart Clock 2: Should you buy it?

As a small screened smart display, the Lenovo Smart Clock 2 is a fantastic companion for your desk or bedside — especially with the new dock. The wireless charging pad and nightlight really come in handy without adding more cables to your table. However, if you don't have a device that supports wireless charging, the dock may not have much use for you. The sometimes finicky nightlight controls can also be frustrating when trying to get back to sleep. But in the end, the Smart Clock 2 on its own is quite nice, and the dock isn't required to use the smart display.

If you want a small screen smart display with Google Assistant, the Lenovo Smart Clock 2 is your only choice. While usually having only one option is a bad thing, in this case, it really isn't. Lenovo has done a good job of designing a product that looks nice and, more often than not, works very well. With the introduction of the new dock, the product becomes even more useful.

Building a wireless charging pad into the dock brings the whole package together. Most modern smartphones offer wireless charging, and removing an extra device that has to be plugged in along with the clock is great. The nightlight is helpful when it behaves and shuts off when it's supposed to. The improved speaker and the other changes Lenovo made to the original version make the Smart Clock 2 a great choice for your bedside.

Bottom line: The small display is perfect for a nightstand or office desk, and the new front-firing speaker makes the audio experience great for its size. When paired with the new dock for a wireless charger, nightlight, and USB-A port, the Smart Clock 2 should be your go-to for bedside tables.

This article was originally published in September 2021. It was updated in November 2021 with the following changes.