It's a big week for superhero programming, with Marvel taking us into the future with The Falcon and the Winter Soldier at Disney+; and DC restoring a relic of the past with Zack Snyder's four-hour cut of Justice League on HBO Max. If you're looking for something less super, we also have freaky horror, alien shenanigans, and a whole lot more.

Along with the flagship superhero stuff, this week also brings a couple of notable finales. Disney XD's beloved DuckTales revival wraps up its run with an extended finale; and Apple TV+'s positively freaky horror series Servant puts a cap on its second season. SYFY has new episodes of its hit alien comedy Resident Alien and fan favorite Wynonna Earp; NBC has a new Debris; and TNT has a new Snowpiercer.

The CW is also stacked, with new episodes of The Flash, Superman & Lois (which is gearing up for a hiatus soon), Black Lightning, Batwoman, Legacies, and Riverdale. Apple TV+ has a new For All Mankind, and AMC has more zombie adventures with The Walking Dead. If sports are more your thing, the NCAA basketball tournament also kicks off this week, so there will also be plenty of March Madness to go around.

Check out the full rundown below.

SERIES FINALE: The Duck family uncovers earth-shattering secrets in a final standoff with FOWL, with the future of adventure hanging in the balance.

When Bryan and Finola investigate a mysterious, otherworldly square that has appeared in a field, they come to understand new revelations about our planet; Maddox meets with an old contact.

Harry must rely on Asta and D'arcy for survival.

PREMIERE: Determined to ensure Superman's (Henry Cavill) ultimate sacrifice was not in vain, Bruce Wayne (Ben Affleck) aligns forces with Diana Prince (Gal Gadot) with plans to recruit a team of metahumans to protect the world from an approaching threat of catastrophic proportions. The task proves more difficult than Bruce imagined, as each of the recruits must face the demons of their own pasts to transcend that which has held them back, allowing them to come together, finally forming an unprecedented league of heroes.

The Falcon and the Winter Soldier (Disney+), Friday - "Series Premiere"

SERIES PREMIERE: Following the events of "Avengers: Endgame," Sam Wilson/Falcon (Anthony Mackie) and Bucky Barnes/Winter Soldier (Sebastian Stan) team up in a global adventure that tests their abilities—and their patience—in Marvel Studios' "The Falcon and The Winter Soldier." The all-new series is directed by Kari Skogland; Malcolm Spellman is the head writer. Streaming exclusively on Disney+.

An engineering catastrophe forces Layton to make a difficult choice that might cost him everything.

As Eva becomes more powerful, Barry and the team must find a way to stop her; an old friend risks her life to help. 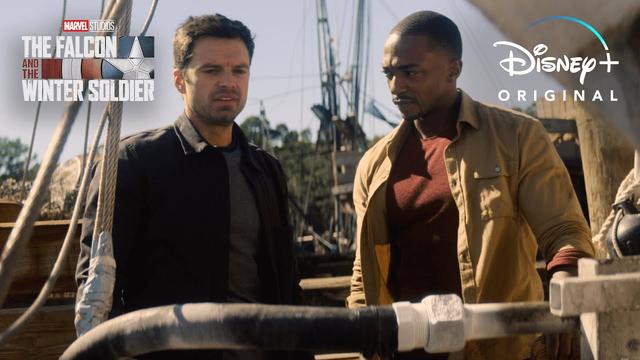 Lois and Chrissy spot Morgan Edge conversing with Mayor Dean and Kyle Kushing, and the two see right through his insincere move to try to win over the town; Clark agrees to help Lois out at a town hall meeting.

Nostradamus had terrifying visions of massive earthquakes flattening buildings, triggering tsunamis and forcing rivers to run backwards; scholars analyze Nostradamus' predictions to uncover exactly how and when the world will shatter.

A big announcement forces everyone to take stock of their current lives; Cheryl sets a risky plan in motion after learning some surprising news about Toni; Jughead tries to make sense of a strange encounter he had.

Nancy Drew (The CW), Wednesday 9 p.m. - "The Quest for the Spider Sapphire"

Nancy and George work together to vanish the ghost who's been timesharing George's body since they defeated the Aglaeca; no one is more surprised than Bess when a blast from her past comes knocking.

It's the last stage of an epic clash as eight bots enter the finale, but only one will reach the pinnacle to claim the Giant Nut and emerge victorious in the BattleBots World Championship Tournament.

Eight teams face off in a new style of BattleBots tournament.

Lizzie suggests holding a fundraiser for the school; Cleo helps Hope cope with her emotions; MG seeks help from Alyssa; when a leprechaun shows up at the school, it might be what they need to turn their luck around.

Legacies | Season 3 Episode 7 | Yup, It's A Leprechaun, All Right Promo | The CW

The Falcon and the Winter Soldier (Disney+), Friday - "Series Premiere"

Ed's reckless behavior at NASA shakes the foundation of the Baldwin family. Tracy attempts to readapt to life in space.

Are You Afraid of the Dark?: Curse of the Shadows (Nick), Friday 8 p.m. - "The Tale of the Darkhouse"

Luke gets help from the beyond to uncover more supernatural secrets and devises a bold plan to finally end the curse of the shadows.

NETWORK PREMIERE: An eclectic foursome of aspiring teenage witches get more than they bargained for as they lean into their newfound powers.

Batwoman's abilities are tested like never before, while Alice's search for Kate continues; Sophie and Jacob set their sights on Coryana; Luke and Mary contend with an unexpected guest.

Batwoman | Season 2 From The Beginning Promo | The CW

Teetering on the edge of war and peace, the gods gather to mourn a loss; Bilquis' divine journey brings her to an unexpected revelation; Shadow finally embraces destiny.

A secret from Flanders' past is revealed; a never-before-seen room in the Simpson home.

The sisters take on the Tomb of Chaos while navigating ever greater challenges in their professional lives.

Eugene, Ezekiel, Yumiko, and Princess are captured and separated by the mysterious troopers that surrounded them at the rail yard; claustrophobic with mounting anxiety, Princess struggles with memories of her traumatic past and plans to escape.