The Gathering Tree is creating campground with tiny trailers for homeless

The Gathering Tree, the nonprofit that operates Eden Village tiny home communities for homeless, has purchased a large parking lot in northwest Springfield and is turning it into a campground.

The campground will have tiny, solar-powered teardrop campers that can be rented by anyone — including homeless people — overnight for $10.

Nate Schlueter with the Gathering Tree explained that they quietly purchased the property in the spring and obtained a business license for a campground. He and Gathering Tree founder David Brown have spent the past nine months exploring what type of tiny campers they might put on the campground and how it would operate.

They didn't intend to make an announcement until they get a bathroom/laundry trailer on the property next month. But with recent public conversations between city officials and homeless advocates about whether homeless people should be allowed to have tents, Schlueter said plans for the campground have been "accelerated."

The campground is located at 3839 W. Chestnut Expressway. It's called the Revive 66 Campground, based on the premise of Psalm 66:5.

"It says 'Come and see the awesome things that God has done for all of humanity,'" Schlueter said. "We are trying to tie into the Route 66 theme. This is on Historic Route 66. We are going to have a 1954 Ford Fairlane vinyled out in front with our logo and use that as a sign."

"We were very impressed with both the idea and the execution of the idea. We are very glad there are organizations like Eden Village/The Gathering Tree willing to try new and innovative ways to address challenges in our community," Director of Public Information Cora Scott said in an email. "We are also pleased to see donations are coming in and that several organizations are supporting the effort. Lastly, we appreciate the coordination the Browns and Nate facilitate with others in the community who are addressing homelessness. Together, we achieve more."

There are currently seven teardrop campers at the campground — not enough to provide shelter to the large number of unsheltered homeless people in and around Springfield. And the campground will not be operational until the bathroom trailer arrives and is connected to electric and water.

The 35-foot bathroom trailer has toilets, sinks, showers and laundry facilities. It should arrive Jan. 6.

There are three vintage camper trailers to be used as office space for staff and volunteers. It is a gated lot with a tornado shelter rated for an F5 tornado.

Schlueter and Brown said they expect it to be in operation about the middle of January 2021 with just the seven teardrop trailers. They could put as many as 51 tiny trailers on the lot, but all that depends on funding.

"We think it offers a little more dignity. There are doors that lock. Your stuff is safe while you are in there," Schlueter said, pointing inside one of the trailers. "You get an upgraded camping experience that's safer than being in a tent, whether it's cold outside or any other time of the year. This is a safer option."

"It beats sleeping in a big gymnasium with 50 other people on cots side-by-side," Brown said. "It's just a different kind of shelter." 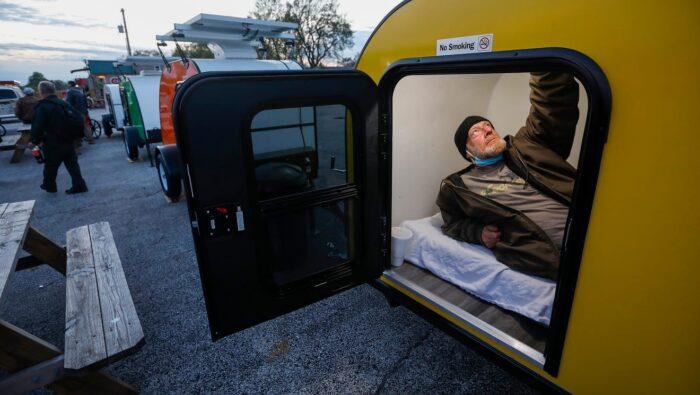 They've spent the past several months visiting other campgrounds, learning how most campgrounds operate and what rules are typically implemented.

There's not going to be any applications to fill out or hoops to jump through, Schlueter said. Just check in for the evening like you would at any other campground.

"Anybody can rent at the campground as long as they follow campground rules," Schlueter said. "If you pull up here on a motorcycle for the Route 66 Festival, you are welcome to rent a unit from us."

"We would open the campground around 8 o'clock in the evening. And we would close at 8 a.m. and send them on their way," Schlueter said. "It's a nightly rental so there's no (daytime) storage. You rent a unit for the night. You can come back the next night and rent it again."

The rules will be a hybrid of campground and shelter rules: Quiet time starts at 10 p.m. and no smoking inside the trailer, for example.

The teardrop trailers' interior are completely wipe-down surfaces that can be cleaned daily.

Schlueter purchased the first trailer in March from a company in Colorado. He then found a local company, Center Creek Teardrops in Joplin, to build the rest.

The cost of a trailer — including the mattress, bedding, solar panel, heating element, fan and USB port for cellphone chargers — is about $6,000.

Just as they did with the homes at Eden Village I and II, Brown and Schlueter will be looking for community supporters to sponsor the trailers.

As for the $10 nightly fee, Schlueter said they've been talking with organizations about the possibility of creating a gift card system in some instances for folks who don't have the money. The $10 fee covers the trailer, staffing and operational expenses — yet is still much cheaper than paying for a motel room, Schlueter pointed out.

As far as Brown and Schlueter know, the Revive 66 Campground model is the first of its kind to use tiny teardrop trailers as a shelter solution for those sleeping outside.

Tents will not be allowed on the campground because the property is an old parking lot and completely asphalt.

"Tents on an asphalt parking lot are colder than tents on the grass and tents in the woods," Schlueter said. "These are insulated really well all the way around. This is a life-saving solution."

The trailers have smart fans that will help cool in the summer months. Staff is still experimenting with different heating elements. When the News-Leader visited Wednesday, Schlueter and Brown were trying out a cheap car defroster that seemed to be working well.

About the Gathering Tree

The Gathering Tree is the nonprofit organization that operates Eden Village I and II.

Eden Village I is a community of tiny homes for chronically disabled homeless people. It is located at 2810 E. Division St. and has 31 tiny homes.

Homes for Eden Village II are still under construction. There are currently 14 of the planned 24 homes on the property at 3155 W. Brower St., but not all of them are hooked up to electric and plumbing yet. The first resident will move in soon.