Oppo F1s REVIEW: A Great Camera setup, Hardware could have been Better

Three years back, on November 2013 a drunk Australian dude tripped over the staircase and posted his not-so-glamorous, out-of-focus photo in a forum calling it a "Selfie". So that's how the word 'Selfie' originated!

With the advent of the cell phone cameras, this concept has grown exponentially without any pause in the growth in terms of popularity.

Taking a queue from this concept, some handset makers manufactured and sold smartphones with the front camera as a selling point. Even though many of them didn't see success, some seem to have hit the right chord!

One such company is the Dongguan-based Oppo! The Chinese handset maker Oppo introduced its first selfie-centric smartphone dubbed as F1 earlier this year in India with 8MP selfie snapper on board.

In quick succession, Oppo has managed to launch to launch two more smartphones under the F series -- F1 Plus and F1s with similar design language and features!

In this dynamic world, upgradations are necessary to survive and Oppo has just done that with the launch of F1s.

Talking about the design, the Oppo F1s is a doppelganger of F1 Plus in the same timeline. There are fair chances of you getting confused since it looks identical from the front! In terms of dimensions, this smartphone measures 154.5 x 76 x 7.38mm and weighs around 160grams.

The Oppo F1s has a metal back with a matte finish, giving it a premium look and feel. On the front, the 5.5-inch display is covered with a reflective glass panel that has the possibilities of attracting fingerprint and smudges.

To make is scratch/crack free, the company has employed the Corning Gorilla Glass 4 protection along with pre-installed screen guard.

In terms of placements, the Oppo F1s has 5.5-inch display dominating on the front, with a proximity sensor, earpiece, and 16MP camera on top and fingerprint integrated home button on the bottom.

On the sides, the metal edges have been raised a bit, placing the volume rocker button on the left, power button and the SIM card/microSD card tray on the right.

SEE ALSO: 100% Working: 8 Steps to Use Your Smartphone as Webcam for Home PC

Overall, this smartphone is very well crafted and feels good to hold in spite of the 5.5-inch display.

Even though the F1s comes with HD display, it is not that bad as we thought. Moreover, the color reproduction is good with an increase in brightness over its predecessor. 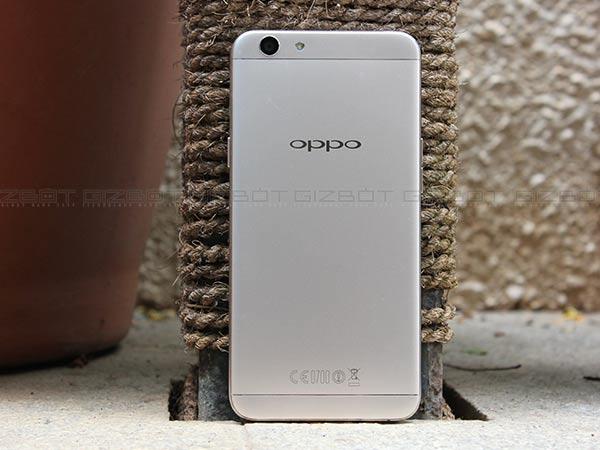 The viewing angle is pretty good, while the sunlight readability tends to be average, due to the reflective glass panel.

If you have a close look at the display, the pixelation are visible with a considerable reduction in sharpness. Overall, the display is definitely not the best in the market, but a decent one that will pass!

Keeping the cost cutting in mind, the Chinese handset maker has downsized the hardware, when compared to Oppo F1 Plus.

On the spec sheet, the F1s is powered by an octa-core MediaTek MT6750 processor clocked at 1.5GHz with Mali T860 GPU under the hood. Due to a low clock speed on both CPU and GPU, performance-wise the Oppo F1s leaves us with a mediocre, if not worse.

With the help of 3GB RAM, the F1s performs smoothly on multitasking without any lag or slowing down issues. While playing games, we do notice some heat but it's not disturbing either.

Talking about the fingerprint sensor, it's quite snappy as well and accurate too. In order to pass the lock screen, you need to press the home button every time, as the fingerprint is not on always. If you are a casual user, Oppo F1s might perform well, but if you want strong performance, then this is not made for you!

Oppo 'F' series is basically aimed at the selfie freaks in town, as it calls itself a 'Selfie Expert'. The most impressive feature in the Oppo F1s is the 16MP camera setup on the front with f/2.0 aperture for some perfect selfies. On the rear, the F1s is backed by a 13MP camera with f/2.2 aperture and a LED flash.

The camera UI is pretty simple and neat, just like iOS! It has photo viewer, shutter button and settings button on the bottom, while the HDR, flash, and other options sit at the top.

This device comes with 5 modes -- Time lapse, Video, Photo, Beauty, and Panorama. The good thing about this is that it works on both the cameras.

Talking about the performance, both the camera performs brilliantly under good lighting conditions giving us some impeccable photos and selfies. The 13MP rear camera comes with Phase Detection Auto Focus, while the front camera comes with fixed focus.

The images produced are well balanced without any oversaturation or over color reproductions. Under the good lighting conditions, the image details are pretty good.

But it struggles to give an average picture under low lighting conditions as we noticed lots of noise and too much of exposure.

Just like other Oppo smartphone, this downsized selfie device comes shipped with the ColorOS 3.0 based on Android 5.1 Lollipop out of the box. Like a majority of the Chinese OS, the ColorOS 3.0 is vibrant and colorful and yes! it looks like iOS too!

However, at this price point, the Android Marshmallow update would have done justice, as the Lollipop 5.1 is kind of outdated!

This time, the company has made some changes on the software front including the Magazine lock screen or the wallpaper carousel (as per Xiaomi). Moreover, the F1s comes with a bunch of gestures including a three finger screenshot, where you need to swipe your three fingers from top to bottom.

Moreover, it also comes with the eye protection display that filters out the blue light to avoid strain in your eyes during night usage.

It's worth mentioning that, the Oppo didn't stuff its OS with lots of bloatware, unlike Huawei's EMUI! On the whole, the ColorOS 3.0 is one of the best in F1s, as it is hassle free and organized.

The Oppo F1s is powered by a 3075mAh battery, which is a considerable upgrade when compared to other Oppo F smartphones.

However, we managed to get around 9 hours of battery out of single charge involving casual usage -- Facebook, Whatsapp, Youtube and voice calling. Lack of VOOC charging technology is another drawback in the smartphone, as it took ages to get fully charged.

When you compare the performance and pricing, the Oppo F1s is of course, overpriced! The Oppo F1s fares well in terms of design, battery, ColorOS 3.0 and of course the camera! Besides, there is no extraordinary feature that makes the Oppo F1s a compelling device.

You will get a lot of smartphone under Rs. 15,000 with similar performance and design language! Having said that, if you are a selfie freak, then there is no better option that Oppo F1s.

If not, there are lots of fishes in the sea, my friend!