Lenovo Smart Clock 2 review: More of the same, but better

Lenovo has been one of Google’s best partners when it comes to making smart home accessories. We’ve seen innovative takes on their tablets that act like smart displays, smart clocks, and more over the years, with no signs of that market stopping.

Today we’re taking the next generation Smart Clock 2 for a spin, which delivers all of the Google Assistant usefulness that you’d expect from the last gen model but with a few improvements to try and justify the upgrade. Is it worth it? Let’s find out.

Contentshide 1 Modular design2 Functional, for a small clock3 Worth it?

If you liked the design of Lenovo’s older Smart Clock (the normal one, not the smaller Essential) you’ll be right at home here. The clock comes in either gray or blue with the same weathered fabric design that’s familiar to Google Homes and other Assistant accessories.

Where the Smart Clock 2 stands out is its ability to modularly sit in a wireless charging dock, which creates an easy spot to drop your smartphone at night to recharge. On its own it’s really not that much different, but the full package makes everything look much more complete. You were probably charging your phone some other way anyway, right?

The power cable plugs into the clock itself, so you can use it without the charging pad if you don’t have room, and overall the design is really clever and works well. There’s no way to use the charging dock by itself, however, and it’s all powered via a barrel plug instead of USB-C or something else you might already have connected. There’s a USB-A passthrough on the dock, though. 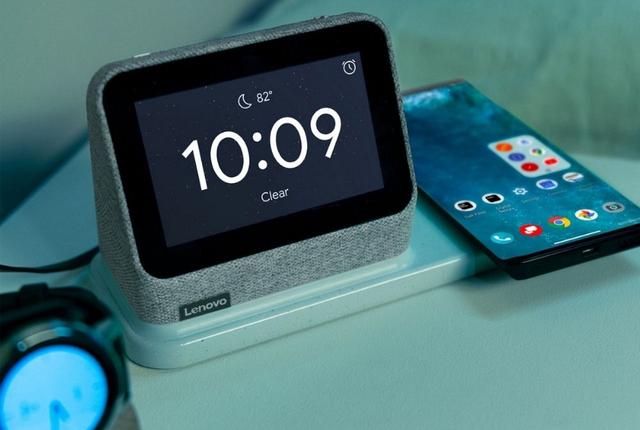 You’ll find your limited control buttons on top of the clock, with just a plus and minus button for controlling volume and stopping alarms. It’s touchscreen otherwise, and relies very heavily on voice commands and casting from your phone to really use it.

Functional, for a small clock

When you’re dealing with something this size, there’s not a lot of room for, you know, hardware. Lenovo didn’t add much in the way of upgrades to the Smart Clock 2, even if there wasn’t much to ask for. The speakers are marginally improved, and there’s still a handy night light feature, but everything else is done via software.

You can set multiple alarms, have music playing, and can do things like check a live feed of your smart home cameras. But with all the cool features you’ll see on the box, they’re still limited.

The camera streaming, for instance, is currently limited to Nest cameras; it also doesn’t support any kind of video streaming, so you can’t cast YouTube or Netflix to it, only audio. It’s barely a 4-inch screen, so I get it, this won’t be your primary watching device, but if it can already handle a live camera feed why not give us the option to do DRM-less YouTube videos? No battery backup, either, so beware power outages.

But despite all that, it does really do a good job of being a high-tech alarm clock for the modern age. If you need anything from Google it’s a simple voice search away. It’ll still control your smart lights and locks, you can use it to cast video to other devices like an Android TV or Chromecast, and you can set up a photo slideshow if you like that running during the day or you’re using it somewhere besides the bedroom.

Much like the original Smart Clock back in 2019, whether or not this little gadget is a good fit very heavily depends on your habits. If you already have a Nest Mini or something similar in your bedroom, the Smart Clock 2 is a natural evolution over that with enough extra features to make it worthwhile. It’s a little more expensive, but you get a screen to act like a clock do a little touch control, and swipe over to see the weather in case you need to check something quietly in the middle of the night.

It doesn’t lack any features from a Nest Mini, either, although the Nest Mini will sound a little better. For a bedroom speaker, that’s probably not going to be a dealbreaker.

But for something with a screen, the screen is still criminally underutilized. Like we mentioned earlier, it’s a shame you can’t do anything even basic like watch YouTube on it, and the lack of compatibility with many smart home cameras also stings. If you want the screen, something like a full blown Nest Hub might be a better option for you, if a bit more expensive. I could see someone making the case that this is really just a hybrid alarm clock/remote control for a small bedroom TV with a Chromecast, though, so there’s still use cases that you might be able to make work.

But it’s a cool and fun gadget. It’s not a necessity, but with Christmas right around the corner, it makes a fun present that a lot of people will at least use and get some extra functionality out of. I’m personally a big fan of going back to having a live clock somewhere in the bedroom, especially if your phone doesn’t have an always-on display or you don’t have a wireless charging stand to support it.

I’m also going down supporting Google Assistant over Alexa, too, so if you’re fully into Google’s ecosystem, this one makes a better fit than some of the Echo devices.

About the Author: Jared Peters

Born in southern Alabama, Jared spends his working time selling phones and his spare time writing about them. The Android enthusiasm started with the original Motorola Droid, but the tech enthusiasm currently covers just about everything. He likes PC gaming, Lenovo's Moto Z line, and a good productivity app.