If someone asked why I prefer HomeKit over smart home platforms, it would be for the ease of creating automations in the Home app that can then be used with Siri over the HomePod. The second favorite reason would be to create automations that happen based on the use of sensors. This week, I want to look at Eve Door/Window sensor with thread support.

HomeKit Weekly is a series focused on smart home accessories, automation tips and tricks, and everything to do with Apple’s smart home framework.

Door and Window sensors have been part of HomeKit since the early days. There are multiple use cases for them. First, you can use them as a low-budget security system that you self-monitor. You can use them to see if your door is opened, set off a series of events if so, and then check your cameras. The Home app can send you a push notification each time the door or windows opens.

Technically, door sensors are based on a simple concept. When the door is shut, the magnet portion closes an electrical current loop. When the magnet is pulled away, the current is broken, and then the sensor is considered “open.” If you have a standard security system that’s hardwired into your house, it works much the same way.

When you add door sensor technology to HomeKit, you can do some pretty fun things as a result. For example, in my house, we’re using an abode alarm system, so I am using their door sensors inside HomeKit. The great thing about HomeKit is that you can get the same result regardless of which door sensor you use. 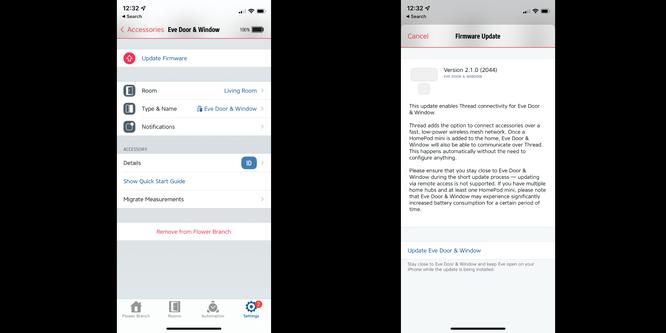 Getting the Eve Door up and running isn’t a lot different than most HomeKit products. You’ll get it out of the box, install the included battery, and then scan the code in the Home app.

You’ll want to download the Eve app right away, though. There will likely be a firmware update waiting for you that adds Thread support. If you’ve read my past HomeKit articles, you know that I am excited about Thread. I love that Eve is upgrading existing devices to support them instead of forcing you to buy new devices.

Thread and its low-power mesh networking technology don’t rely on a local hub, so there’s no single point of failure for your network. If devices go offline, data packets routes can be alternated to reach the internet. Once a HomePod mini is added to the network, Thread-enabled accessories will automatically communicate with it and each other. This connectivity happens automatically without users having to configure anything ahead of time. Thread support is one of the critical features of the HomePod Mini over the original HomePod.

As the number of devices with Thread technology grows in your home, your network will continue to become more powerful.

Where is Eve Door useful?

If you don’t have a HomeKit alarm system, put an Eve Door on all of your exterior doors. From there, you’ll have the option to build HomeKit automations to turn on specific lights when a door is opened, etc. Most people think of using these automations to turn in interior lights, but I’ve found it useful for turning on exterior ones.

One of my favorite automations to use is with taking our dog out at night. We have automations set to turn exterior lights on for 15 minutes when the doors are opened at night. The lights automatically shut off after 15 minutes.

Outside of your exterior doors, it could be useful elsewhere in your home. Anywhere you have a door could be a spot. Do you have a liquor cabinet and want to see if it’s opened (but don’t want to lock it)? Install Eve Door on the inside. Do you want to track how many times a day your pantry door is opened? Track it with Eve Door.

Eve Door is an effective and useful HomeKit device. If you don’t have a HomeKit compatible alarm, you should put it on all your exterior doors. I love that it includes a Thread firmware upgrade, and my only complaint would be that it would include a rechargeable battery option. On the other hand, it would be tricky to pull the motherboard out while the casing stays attached to the door.