A recently released batch of code for Android 11 has revealed a new menu that appears when you hold the power button on an Android phone.

The menu includes Google Pay shortcuts, some smart home controls and, of course, the regular power toggle and emergency button, according to Twitter user Till Kottmann and later confirmed by XDA Developers.

Earlier in the year, it seemed Google was revamping this menu on Pixel phones to include quick access to Google Pay, but now it’s thought that this feature will roll out to all Android 11 handsets. Right now, some pixel phones have access to the card portion of this new menu. I find the feature handy since I can pull out my points cards to scan very quickly now.

The key feature that seems to be changing, according to the leak, is that Google will allow other digital payment companies to use this API for their card framework. That means if you’re a Samsung user, you can use the feature with Samsung Pay if the South Korean company updates its phones to support it. 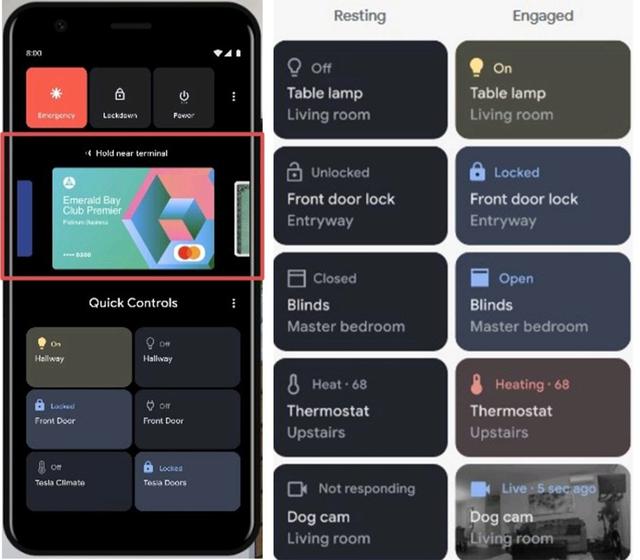 The addition of smart home controls makes this menu even better, and it’s something I’ve wanted Google to implement for a long time. The leak says the company is calling these toggles ‘Quick controls.’

The leak also shows them controlling many smart home gadgets like thermostats, lamps, blinds and door locks.One of the examples even shows off a live feed of an in-house security camera.

It looks like you can select somewhere around six to 10 items from the Google Home app to display here as a shortcut. You can even drag a slider to adjust the brightness of your lights.

This is a huge reason to be excited about the next Android update and helps put Android on a level footing with iOS, which has had a decent set of smart home controls accessible when you pull down the ‘Control centre.’