Garmin makes three sizes of Fenix 7: the 7S, the 7X, and the bog standard 7. The Fenix 7S has a relatively petite 42mm watch face, while the Fenix 7X is the classic giant wrist-hugger with a massive 51mm face. And the version we’re reviewing is the middle child, the Fenix 7. While Garmin offers cream gold and rose gold finishes in the smaller Fenix 7S to soften its appearance, a Fenix 7 series watch is not the obvious choice if you want something dainty and unassuming.

We’ve worn the Fenix 7 consistently for just over a month now. It’s comfortable to wear all day, every day, but often we’ve found ourselves taking it off in bed in a half-conscious daze, probably because it’s a little clunky. It actually weighs 73g, which is a lot more than the 38g of the smallest Venu 2 or the 46g Fitbit Sense.

Still set on a top-end Garmin? You have another decision to make, as the company offers three variants (standard, solar and sapphire solar) across the three different sizes, so there’s a grand total of nine different watches to choose from.

The 'Sapphire Solar' model that we're testing has ultra-tough Sapphire display protection rather than Gorilla Glass, and solar-charging screen tech.

You can see the main solar panel around the perimeter of the screen, which is a little reddish band. The display glass itself also sucks in energy from the sun, at a lower rate.

How useful the solar-charging tech is depends largely on where you live. We tested the Fenix 7 in Thailand for a couple of weeks, then in London for a further few weeks. As you might imagine, it proved much more effective in sunny Thailand. January in London? It's pretty useless there. Wherever you’re using it though, you’re likely to need to charge it on a regular schedule if you’re using the GPS tracking.

The Fenix 7 series uses Garmin’s staple screen tech. This is not a smartwatch-style display with bold color and searing brightness. It’s a transflective screen that becomes clearer as the ambient light level increases.

There’s a digital watch-style front light to make the display visible in darker rooms. If the Garmin Fenix 7 will be your first runner’s watch and you’ve tried a smartwatch before, it will look dull. However, it’s still an exceptionally good type of display for fitness use.

You effectively get an “always on” screen with no sacrifice to battery life, and it looks wonderfully clear when you go outdoors on a sunny day to track a run or hike. The Fenix 7 has a 1.3-inch screen of 260 x 260 pixel resolution. Sizes and resolutions scale up and down just slightly between the Fenix 7S, 7 and 7X.

This screen style is what makes the Fenix 7 seem just like its predecessors. However, when you start using the thing you’ll notice one of this generation’s big changes.

The Fenix 7 has a touchscreen, unlike all of the older “serious” Garmin watches. Previous generations were button operated only, to avoid a whole series of potential headaches. The old-style interface wouldn’t go haywire when the screen was wet, and there was very little chance of you accidentally stopping or pausing a workout mid-session.

Garmin avoids the latter issue by disabling touch as soon as you start a workout, although you can switch it back on if you’d much rather swipe your screen rather than using the buttons.

And like all top-end Garmins, the Fenix 7 is a watch you can wear almost anywhere. It has superb 10ATM water resistance, double that of most great smartwatches.

The big change in the Fenix 7 is its adoption of the touch-led interface style of the Venu 2 watches. Flick up from the watch face and you’ll see a summary of all the Fenix 7’s recently recorded data. There are entries for your heart rate, the day’s sunrise/sunset times, your steps, training status, sleep, body battery and more. These are called widget glances, and were introduced in the Garmin Fenix 6.

Other standout features include sleep tracking and body battery. This watch’s sleep tracking is very good, and this strength is as much down to the presentation of information as its accuracy. You get a little graph of your sleep stages through the night, the numbers on how long you slept and spent in each stage and a two-sentence summary on how good your last night’s sleep was.

It’s a great, digestible way to show sleep data from a series not always known for its user-friendliness. The only issues are that the Fenix 7 sometimes takes a little while to finalize its sleep report: get up ultra-early and it may show the wrong figures until later in the morning. 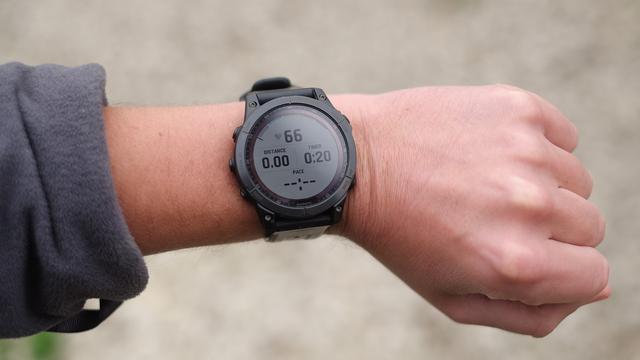 The Fenix 7’s sleep data feeds into Body Battery. This spits out a score of 100 based on how run down it thinks you are. Exercise and stress deplete this score, as does simply being awake. This is a made up Garmin metric, of course, based on the data it collates. But Body Battery is a good way to relay that you might not be getting enough sleep.

Unlike some of the lower-end Garmin watches, the Fenix 7 has a big focus on stats like VO2 Max and your training status. These are useful watch-based metrics to monitor when looking for progress in your general fitness.

All watches in this series also include access to detailed Garmin TopoMaps. You download these to the watch, roughly by continent, and they contain a huge amount of data. Europe is 10.8GB, for example. These maps can be used for on-watch turn-by-turn navigation, or just to help you out while on a hike. But navigating around them is nowhere near as smooth as, say, on an Apple Watch 6.

The Fenix 7 tries to negate the need for a phone 99% of the time, a concept that's seen in its music support. You can transfer files directly to the watch from a Mac or PC using a cable, or hook up to Spotify, Deezer or Amazon Music and download tracks from their libraries.

Music can be a bit of a battery hog though. Garmin says the Fenix 7 lasts up to 10 hours when location tracking with all supported satellite systems and playing music. This figure rises to 57 hours when just tracking exercise using GPS, or up to three weeks in the watch’s basic smartwatch mode. When testing, we found that the Fenix 7 lasted around two weeks, if we were mostly using it to track 45 minute runs every other day.

On top of all this, you'll get wireless payments through Garmin Pay, access to the Connect IQ app store and support for additional sensors using ANT+. For example, the watch can connect to and control a smart turbo trainer, or you can hook up to an HR chest strap for even better heart rate reliability.

However, it’s also important to note what Garmin has left out. You don’t get ECG readings, as in an Apple Watch or Samsung Galaxy Watch 4. There are no blood pressure readings either.

SpO2 is one of the more health-leaning stats that the Garmin Fenix 7 can record. This is your blood oxygenation. Garmin calls it Pulse Ox, a feature that has been part of the Garmin roster since before SpO2 readings became trendy.

However, it’s also the only Fenix 7 sensor we’ve had some issues with. It has recorded some readings at 90% — abnormally low — which were not repeated elsewhere. As ever, if you’re worried about blood oxygenation you should buy a dedicated pulse oximeter rather than relying on a wearable. Our dodgy readings could have been caused by movement during recording, or wearing the watch on a too-bony part of the wrist, but that it will happily produce these results at all is not great.

The Fenix 7’s Pulse Ox feature uses red/infrared LEDs built into the optical heart rate array to take these readings, but thankfully the watch’s optical heart rate results are much better. Its results track closely with those of our benchmark chest HR strap, with typical discrepancies of just a couple of bpm, whose effect is close to nil over the course of a workout. Unlike some of the Garmin watches we used in 2020 and 2021, the Fenix 7 does not report too-high readings at the start of a workout either.

The watch’s GPS is reliable too. You will see some route smoothing in the map of your runs, post-workout, but it is consistent enough that in our run route we could time almost to the second when the Fenix 7 would hit each new km. It’s quick to lock onto a GPS signal and we experienced no drop-outs at all during testing.

The heart rate sensor’s resting readings are also largely reliable. They are free of the overshooting spikes that can happen when you get up from your work desk when wearing a watch that relies on flaky predictive algorithms.

The Fenix 7 has a different optical heart rate array to the Fenix 6, one that looks just like that of the Garmin Venu 2. It has more light-analyzing sensors, which lets the watch error-correct more effectively.

Garmin’s Fenix 7 is a wonderful fitness and running watch that has more features than most will ever discover, and long battery life. It adds touch support and plenty of technical tweaks to the Fenix 6 blueprint, without seeming to water down its appeal.

The main thing to contend with is whether a Fenix 7 will be overkill for your needs. Its base model is far from cheap, and solar-charging Sapphireones are a major investment. We also prefer some of Garmin’s smaller watches for all-day wear. This is something to consider if you care as much about sleep tracking as keeping a record of your 5K run times.

Cost and general chunkiness are the two reasons to be put off a Garmin Fenix 7. It’s otherwise a stellar fitness watch. Garmin has a few alternatives if either of these factors is a problem.

The Garmin Venu 2 is thinner, lighter and cheaper, and will still be just as effective for many of you. It does not have on-watch maps, the battery life is shorter and its approach to data analysis is a little lighter.

Not bothered by the price but don’t like the Fenix 7 design? The Suunto 9 Peak might suit. It is Suunto’s top-end watch and made, in part, for hikers. However, its mapping support is far more limited than Garmin’s. You create routes on your phone and a basic trace line is sent to the watch for reference. It’s quite a different proposition to the full map data available with a Fenix 7.

If it’s just the practical but dull-looking screen that doesn’t do it for you, consider the Garmin Epix. This was announced alongside the Fenix 7, and is similar to the standard Fenix but has a colorful Sapphire-protected OLED screen, but no solar charging.

Finally, if you're really looking for the cheapest model available, go for something like an Amazfit GTR 3, which has in-built GPS and a decent battery life for its price.