Facebook’s Portal smart displays are powerful but uneven communication tools: They have excellent cameras and support top videoconferencing platforms, but you can’t use them to make phone calls and they integrate some apps in nonintuitive ways. The 2021 edition of the 14-inch Portal+ ($349), the largest and priciest entry in Facebook's lineup, is no different. Its screen is smaller than that of the first-generation, 15.6-inch Portal+, and although the new model can tilt up or down, it's stuck in a landscape orientation unlike its predecessor. It also costs a lot more than both the Portal ($179) and the portable, battery-equipped Portal Go ($199), as well as the Editors’ Choice award-winning Amazon Echo Show 8 ($129.99). Of course, there's also the matter of Facebook itself and how you feel about it as a company. So unless you need a large screen, we recommend one of the more affordable competitors from Amazon and Google.

It's Big, But Doesn't Rotate

The Portal+ essentially mounts a tablet on a 5.2-by-8.0-by-2.6-inch (HWD) base that sports a light gray fabric. Including the screen, the Portal+ measures 9.9 inches tall and 12.3 inches wide. The back of the base holds a connector for the included power adapter and a USB-C port for service. The front of the base features a tiny metal foot that extends half an inch forward, presumably to keep the front-heavy screen from toppling forward.

The screen is a 14-inch, 1440p LCD with a narrow black border and a smooth, matte black plastic back. It can tilt back nearly 45 degrees, but, unlike the original Portal+, it's set in landscape orientation and you can't rotate it. You also can't pivot the display left or right on the base like the Echo Show 10; that model can automatically rotate to follow you as you move in the frame. The Portal+'s vertical tilt is still useful, however, because it provides more flexibility for properly positioning the camera and screen than the stationary designs of the Portal and Portal Go.

A 1.5-inch-wide plastic enclosure on the top edge of the screen houses the 12MP camera and far-field microphones. It implements a physical privacy cover that slides over the lens, as well as a button that disables both the camera and microphone.

Facebook’s Portal devices continue to utilize their touch screens better than any other smart displays we’ve tested. The Portal+'s tap-friendly home screen lets you quickly access apps or send voice or video messages to your favorite Facebook contacts. It also provides access to many apps; a surprisingly powerful web browser; music streaming services such as Deezer, Pandora, Spotify, and Tidal; and even a Plex client if you have a local media server.

The Portal+ doesn’t have the most consistent interface, however, and it suffers from some confusing app implementations. While the apps listed above are separate programs, many others are simply site bookmarks that load work via the web browser, including but not limited to Twitch, YouTube, and, most egregiously, Facebook. You can use the Portal+ to send voice and video messages to Facebook friends and conduct voice and video calls with them, but the interface doesn’t let you directly access your Facebook feed. Instead, you need to go to Facebook's website for that functionality. The good news is that the web browser works very well, and you can probably use it to access streaming media services that aren’t listed in the Portal+’s modest bookmark list. That said, these sites don't work well with the smart display’s voice control, and use interfaces that are clunkier than those of dedicated apps. 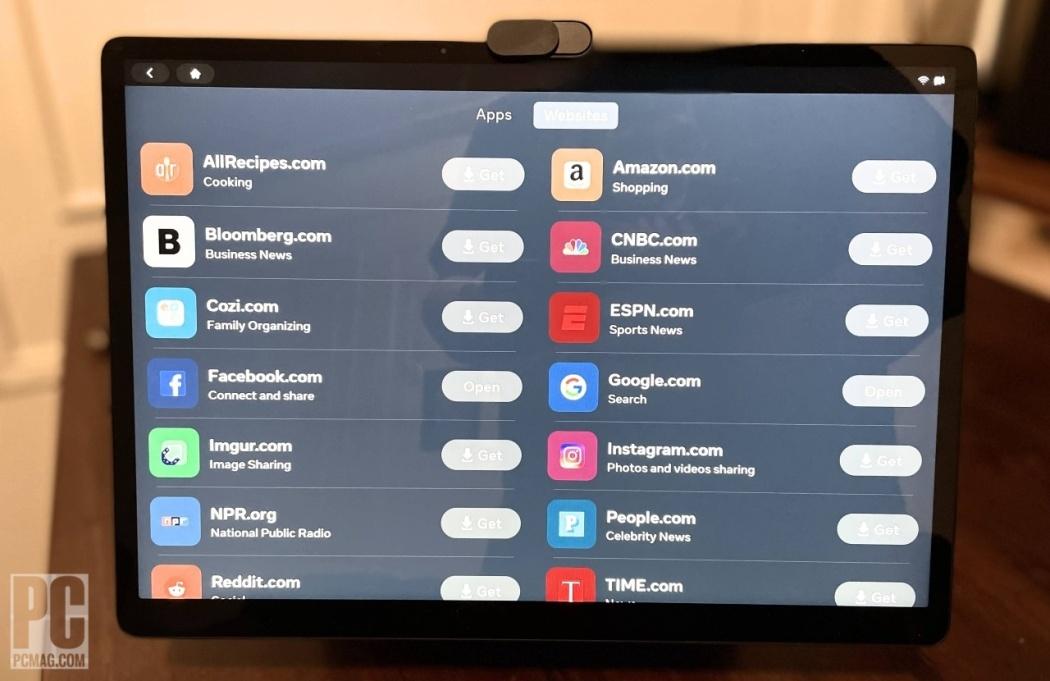 As for voice controls, you can use the “Hey, Portal,” command to open apps and the aforementioned web bookmarks, as well as contact Facebook friends. The Portal+'s voice controls also lets you search for music on compatible apps and can provide very basic information, such as weather reports. Unlike Alexa, Google Assistant, or Siri, however, you can't use these voice commands to control your smart home. However, linking your Amazon account to the device enables you to use Alexa to control compatible smart home devices, check your calendar, and get general information like trivia or sports scores. One limitation is that Alexa on the Portal+ doesn’t support phone calls (or any type of calls) over Amazon’s Drop In platform or Skype.

The Portal+’s communication features, like its app support, are uneven. You can make voice and video calls with Facebook Messenger, Facebook Workplace, and WhatsApp, as well as participate in videoconferences on services such as BlueJeans, GoToMeeting, Webex, and Zoom. However, Skype is completely missing from the system, and you can’t make phone calls with it like you can with the Echo Show and Google Nest Hub devices.

The Portal+ has the technical chops to handle video calls, and stands out as a platform for entertainment. The 12MP camera is slightly wider than the one on the Portal Go (131 degrees compared with 125 degrees) and the adjustable tilt means you can angle it for more flattering shots than on a fixed-screen smart display. The camera is also bright and sharp, which is beneficial for video calls. The microphone is quite clear, too, though like any far-field mic, you're more likely to get some room echo and outside noise compared with using a headset boom mic or USB mic.

The screen is easily the best we’ve seen on any smart display because of its excellent resolution. At 2,160 by 1,440 pixels, it’s far sharper than the 10-inch, 1,280-by-800 screens on the Echo Show 10 and Nest Hub Max. It’s pleasantly bright and colorful, as well as very easy to read. It’s a shame that you have to go through the web browser to watch most videos on the Portal+ instead of using dedicated apps, because the screen is big and sharp enough for it to double as a dedicated multimedia device.

Despite its larger size, the Portal+ appears to have a very similar speaker array to the Portal Go; it uses two 5W full-range drivers and a 20W woofer. Still, the Portal+ offers better bass performance, possibly because of the different shape of its enclosure or less aggressive digital signal processing (DSP) than the Portal Go. The audio processing still tamps down sub-bass-heavy tracks like The Knife’s “Silent Shout,” but the effect isn’t nearly as intense. The speaker here won’t shake your walls, but the kick drum hits get a solid sense of thump that they lack on the Portal Go, and we didn't hear any distortion even at maximum volume.

The audio balance is also more stable and pleasant here than on the Portal Go, emphasizing the low-mids to high-mids with a bit more consistency. The opening acoustic guitar plucks in Yes’ “Roundabout” get plenty of lower-frequency resonance and a bit of higher-frequency finesse to bring out the string texture, even if it isn’t particularly crisp. When the track properly kicks in, the bassline sounds prominent but leaves enough room for the guitar strums, drums, and vocals to retain their presence in the mix. The speaker doesn’t offer quite the level of treble response we like to hear, however.

The balance isn’t perfect, and the low-mid-heavy sound of the Portal+ is apparent in The Crystal Method’s “Born Too Slow.” The backbeat that drives the track gets enough thump to sound properly ominous, but the guitar riffs and vocals settle a bit in the background instead of cutting through the mix. The track doesn’t sound overly harsh like it does on the Portal Go, but it errs a bit too much in the other direction and takes away some of the song's intentional screechiness.

It’s difficult to discuss any Facebook product without acknowledging potential concerns with the company’s history, especially in regards to privacy. For directly keeping Facebook’s eyes and ears off of you, the privacy cover and switch for the cameras and mics on the Portal+ should do just fine. To limit what information Facebook retains from your use of the Portal+, just like whatever it keeps from any interaction you have on Facebook, you have to dig through your account’s privacy settings.

As for Facebook’s other controversies, such as its purported enabling of extremist groups to widely spread disinformation, that’s a personal question to consider, especially when the makers of the the Echo Show (Amazon) and the Nest Hub (Google) are also controversial. Still, Facebook is arguably the worst of the bunch, and I can imagine the company's reputation will be an automatic deal breaker for many potential buyers.

The 2021 Facebook Portal+ has a larger, sharper screen and sounds better than the standard Portal and Portal Go. However, these aspects aren't enough to justify its much higher price. If you value portability and can make peace with a smaller screen, for instance, the more affordable Portal Go is a better option. That said, in terms of sheer value, Amazon's Echo Show 8 remains our favorite smart display for non-professional use. And if a tilting screen is essential, the Echo Show 10 offers more advanced functionality; it not only tilts vertically, but can automatically pivot to keep you in the frame.

The 2021 model of the Facebook Portal+ has the sharpest screen we've seen on a smart display, but that isn't enough to justify its premium over the regular Portal and other competitors.