Many of my long-term readers will know I have somewhat of a fetish for Fireblades.

I own a 1993 first generation, a 1995 and a very tasty 2014 Fireblade SP that won the Australasian FX Superbike Championship in the hands of Wayne Maxwell.I had to have the SP as it looks simply glorious in its very Honda looking red, white and blue livery.

While my 1993 is black, the most renowned livery for the first generation model is the white, red, blue seen below.

For the 2022 model year Honda has treated an improved latest 2022 CBR1000RR-R Fireblade SP model to a livery that celebrates the 1992 original, a 30th anniversary ode to the roots of the Fireblade.

It looks great, and I am generally a traditionalist in these things, but the black colour scheme is absolutely outstanding. 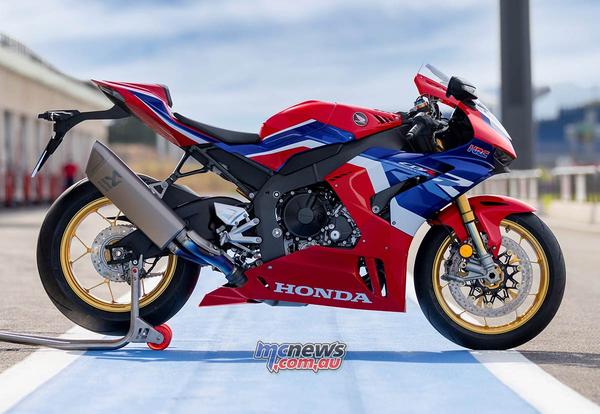 How good does this black model look!

Obviously the Fireblade has been more about performance than window dressing, and for 2022 the Fireblade has received performance-focussed improvements centred on mid-corner acceleration and drive: intake ports, airbox, airbox funnels and exhaust mid-section have all been revised to deliver extra mid-range.

The final drive sprocket goes up 3 teeth, to 43, for stronger acceleration through each ratio and quick-shifter performance has been upgraded.New for 22YM, for smoother airflow on an opening throttle, the ‘dirty’ side of the air filter has been adjusted to control the direction of intake air separation and vortex generation. On the ‘clean’ side, filtered air now feeds slashcut intake funnels, with #2 and #3 shortened by 15mm. Also, and to match, the inner diameter of the intake ports has been partially narrowed to increase airflow velocity, improving filling efficiency thus performance through the midrange.

The bodywork and riding position maintain an uncompromising focus on aerodynamic performance, and the fairing features MotoGP-derived winglets to generate downforce.

These new Fireblade models are only made in limited production runs and are expected to arrive in Australia during the second-quarter of 2022. Pricing TBA.