In September 2021, Facebook and Ray-Ban launched Stories – a pair of smart glasses that allow users to record audio, take pictures and make videos as well as taking phone calls, listening to music, and looking cool all at the same time. But since their launch, various parties have raised concerns about privacy – will the glasses enable users to film others without their knowledge or consent? And who has access to the content once it is uploaded to Facebook or other social media sites?

Stories are essentially ordinary glasses that have speakers built into the frame around the temple near the ears, two cameras positioned at the top left and right of the bridge, and a three-microphone audio array positioned around the frame. They can be operated through voice control – ‘Hey Facebook, make a video’ etc. – or by tapping a small button on the side of the glasses.

The cameras don’t appear to have a zoom function and can take photos at 2,592 by 1,944 pixels and videos at 1,184 by 1,184 pixels, so the quality of the images is significantly lower than what you would get on a typical smartphone. The company says a fully charged frame can store up to 50 videos of up to 30 seconds in length locally.

Once snapped, photos and recordings taken by the glasses can then be edited and shared to Facebook, WhatsApp and other social media platforms with the use of the Facebook View app. So before using your shiny new pair of Ray-Ban Stories specs, you will have to set up a Facebook account or connect your existing account to the glasses.

You will then be able to access and edit the material captured with the glasses from your Facebook account. However, there is no option of operating the account using the glasses, so that if you lose your shades any potential privacy breaches will be minimal. 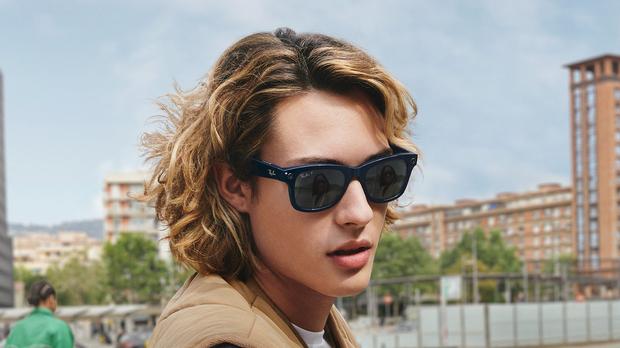 Once locked in to the Stories ecosystem, Facebook has access to all material you record. Because recording is so easy, you literally only have to push one button or make a simple voice command, it’s likely that this will include many accidental, unwanted recordings. Regardless, Facebook View’s Privacy Policy makes clear that the company will be able to directly access the material. And of course, anyone with the necessary account will be able to access any uploaded content via social media.

But what about the glasses’ potential for covert snooping? Facebook say that the smart part of the glasses can be turned off, for example when the user is in a private setting. This means, Facebook CEO Mark Zuckerberg assures, that the glasses stop recording audio and images period.

Also, when the glasses are recording, a little lamp next to the camera will emit a bright flashing white light, which will at least give others an indication when they are being filmed, unlike smart phones. It is often relatively easy to see when someone is recording with a smartphone thanks to the way they hold the device – that is clearly not the case the smart glasses. And how well people will be able to see the light in public is also uncertain – a point already raised by data privacy regulators across Europe. It also doesn’t seem difficult for users to cover it or damage it.

Then come the legal matters. In Europe, the General Data Protection Regulation regulates how individual users of products such as CCTV cameras and Facebook’s Stories glasses use personal information about individuals captured in public places. The law places strict obligations on anyone capturing data using such products, including making it clear that they are doing so, what they are going to use that data for and who they are going to share it with. Some of these obligations can be really challenging to achieve for companies, never mind individual users of products like the Stories glasses.

All things to think about if you ever see someone wearing sunglasses acting a little shadey.