Ditch the Keys: It's Time to Get a Smart Lock

Until recently, the pin-tumbler has been immune to the digital revolution. But Marc Weber Tobias, global expert on locks and physical security, notes that keypad entry and wireless locking systems have been in commercial buildings for years. Now, smart locks are finally coming to residential abodes as well. Tobias thinks the change is due to the rise of the smartphone. "In America, it's all about convenience and gadgets. If you can walk up to the door with your smartphone and touch the lock and it opens, why do you want keys?" he says. "As long as it's secure."

Most electronic locks are drop-in replacements for conventional locks, and installation is just as straightforward. Or, at least, that's what I was told. I've never installed a lock in my life, so I left that work to a professional locksmith, who installed them within minutes in the deadbolt holes in my front and back doors. My wife—who usually indulges me in my early-adopter experiments—had reservations. "If I get locked out, you'll never hear the end of it," she said.

The locks I had installed are Yale Real Living electronic deadbolts, from the same company founded by Linus Yale Jr. and Henry Towne in the 19th century. Other residential digital locking systems are available from Schlage and Kwikset as well as startups August, Goji, and Lockitron. Since locks are as much a matter of home decor as of home security, the hardware comes in a variety of finishes and styles. The first generation of digital locks had hard-key pushbuttons, but the current, second-generation electronic deadbolts typically use illuminated touchscreen keypads or wireless connections to a smartphone or key fob. Some have a redundant key-in cylinder, some do not.

The "handsome styling" of these digital locks refers to the keypads on the outside of the door—because on the interior side, the lock is a large, ugly brick that houses the electronics, a motor drive system, and a battery enclosure. The batteries inside my units were four alkaline AAs that the company claims last about a year, and, since nobody wants to be locked out of their house because of dead batteries, the locks also have an indicator that warns you when the power dips low.

The Yale Real Living deadbolt is programmed with a master code, with which you can create up to 250 four-to-eight-digit codes. When you leave the house, you push your palm to the touchscreen and the door locks automatically. To get back inside, press your palm to the screen to see the numbers, then type your code and the door unlocks—no key required. (Wireless locks such as Kwikset's Kevo, August, Goji, and Lockitron require that you bring either a smartphone or a key fob.) Guests, babysitters, contractors, and relatives can each get a separate entry code, which can be erased at any time using the master code. 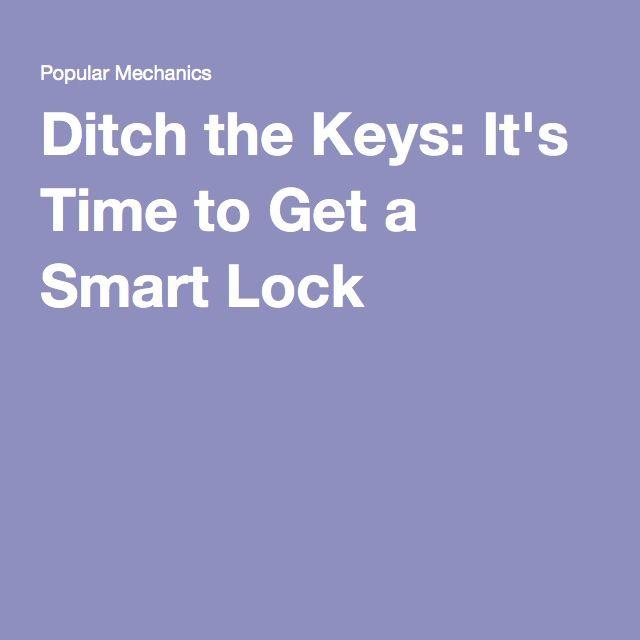 Things get interesting when you link your lock to the rest of your home. Digital locks from Yale and Schlage can be purchased with integrated ZigBee or Z-Wave wireless antennas, allowing them to work with a home-control service such as ADT, Alarm.com, AT&T Digital Life, or Vivint. These integrate thermostats, lighting, surveillance cameras, security systems, even garage doors into Web-based interfaces that let you monitor and control every aspect of your house, from the inside or halfway around the world.

In addition to living with the Yale electronic locks, I signed up for a trial with Alarm.com to see how well the two systems worked together. An installer connected my locks to a control panel, then set up some motion sensors and cameras. He showed me how I could unlock the doors remotely from my smartphone, or configure alerts to ping my device when the door had been opened. The cameras could even snap the visitor's photo. Shortly after the installer left, my wife unplugged the cameras. "I'll live with the digital locks," she said. "The cameras are just creepy."

In practice, having an electronic door lock means you can walk out of the house without keys and still lock the door since the key is, essentially, in your head. It's surprising how quickly you get used to it—I now carry my car keys, wallet, phone, and nothing else. But the flip side of the key-as-information paradigm is that information is infinitely replicable and easy to distribute. Anyone who learns a code can gain access to your home. I still refuse to share one with my 4-year-old son because I'm convinced he would blab it to anyone who asked. Plus, the bad behaviors that make passwords vulnerable on the Internet now suddenly apply to my house. When I tried to create a password for one visitor, she started to write it down. "Don't do that," I said. "I'd rather you pick something you can remember." So she picked the alphanumeric keys that spell her child's name. "That's a terrible passcode," I said in frustration. "But that's what I use with my bank," she replied. Ugh.

The first thing everyone asks when they see a digital lock is "Aren't you afraid some hacker is going to break in?" But that's the wrong question. While it's true that digital systems are vulnerable to attack—especially those linked to a Web-based account—hacking my electronic lock still requires considerably more effort than picking a conventional lock. Or just smashing the window next to my door. Tobias, who breaks into locks as a consultant to major lockmakers, says he has concerns about the security of electronic locks that use wireless protocols, but he believes many are more vulnerable to physical attack. He has already demonstrated how he can break into Kwikset's Kevo lock within 15 seconds. "Security isn't just one thing," he says. "I don't care what kind of lock you have, my advice is to get a good alarm system." The unfortunate truth is that all residential door locks are deterrents—not guarantees of safety.

Then there are the unexpected surprises. Shortly after the Alarm.com installer left, I tried entering new user codes into the lock, which didn't work. What gives? I thought. Turns out that wireless control of the locks requires you to input all user codes through the Alarm.com interface, rather than directly into the locks. Then I moved the control panel to a more convenient location and it lost all communication with one of my locks. This, I learned, can be an issue with Z-Wave devices, which work as a mesh network—bouncing a signal from one device to the next. When you change the location of one node of the network, you can disrupt the signal transfer, and any devices that have dropped out need to be rediscovered. Since the effective range of each node on the network is relatively short, you must either install repeaters or move your control panel around the house until you find that perfect spot where it can see all your Z-Wave devices—and hope that spot isn't the bathroom shower stall.

In my three-month experiment, I also discovered one little glitch that Yale obviously didn't build a contingency for. One day I came home to find my front-door lock completely dead. What happened to the battery warnings, I wondered? Luckily, I was able to gain access through the back door, which still had a functioning lock. When I got to my front-door lock and opened its battery compartment, I discovered the problem: One of the batteries had burst and was leaking potassium hydroxide electrolyte—a relatively common occurrence with alkaline batteries. This gave the lock no way to indicate a low-battery state. I also had a redundant key, but had stopped carrying it by then—good thing I've got two doors.

These obstacles aside, living with digital locks was a liberating experience. Some adjustments were needed to get the Z-Wave equipment working properly, but now it's operating reliably. I had to clean the caustic mess from that burst battery, but fresh Duracells fixed it up in a few minutes. For sure, there are issues that can and should be addressed. But the key-free lifestyle is so convenient that even my lock-Luddite wife has come around. After my experiment was completed, I offered to dismantle the system and replace it with our old, conventional locks. Nope, she said. She'd come to appreciate the electronic system. Besides, neither of us has any idea where our old keys are.