Bring your deadbolt to life with Lockitron Because let's face it: keys are dumb.

Most of us lock and unlock our doors each and every day, so why not smarten the whole process up? That's the idea behind the Lockitron, the intriguing gadget from Mountain View, Calif.-based startup Apigy. For a current preorder price of $179, the Lockitron promises to turn almost any deadbolt into a smart lock after less than a minute of installation.

Using a free smartphone app (available for iOS and Android devices) users will be able to tell the Lockitron to lock and unlock the door remotely -- perfect for letting someone in from afar, or double-checking to make sure you didn't leave the door unlocked by mistake. In addition, Lockitron comes complete with an NFC (near-field communication) tag that will toggle the state of the lock whenever it's tapped by an NFC-enabled Android phone. Stuck with one of those horrible, NFC-less iPhones? Don't worry, because you'll have the similarly cool ability to connect your phone to the Lockitron over Bluetooth, then trigger the lock just by approaching it.

Owners of older phones can also control their deadbolts by sending the Lockitron a text message, but for that to work, they'll need to pay a $5-per-month fee. (If your phone is too old to send text messages, then maybe it's time for an upgrade -- though I'm guessing you get that a lot.)

Locking down the market Despite being rejected from Kickstarter when the site decided not to allow home improvement products, Lockitron's developers were still able to crowdfund over $2 million dollars directly through their own Web site, so there's clearly a demand for these kinds of futuristic locks. Unsurprisingly, the smart-lock space has become a rather crowded one in the year since, with new competitors emerging like the August, the Goji, and the Kevo, not to mention existing automatable locks from established names like Schlage. The big question here is, what has Lockitron done to stand out? 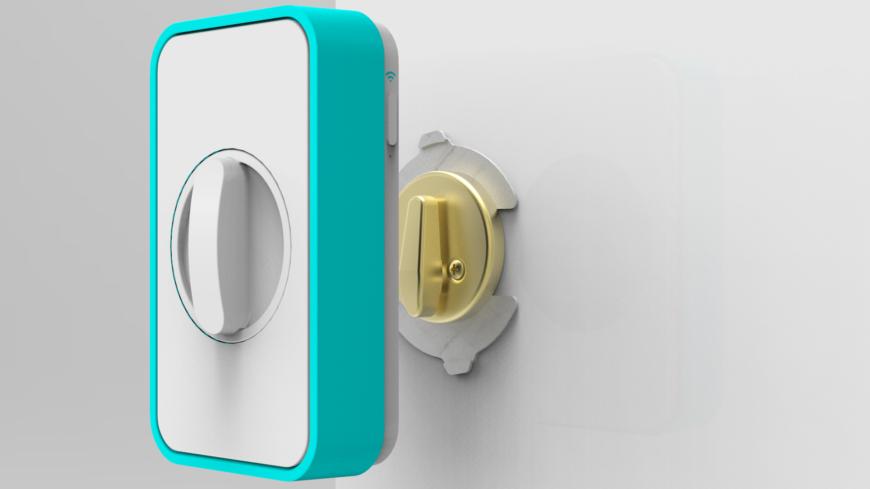 Locking and unlocking the door remotely isn't a unique feature, and neither is the option to share temporary access with someone like a pet sitter or a house cleaner. Even the NFC compatibility is something that certain existing companies, like Yale, are already using for some residential locks, and other locks that use fob-based entry are basically offering the same thing. The Lockitron won't take a picture of whoever it is at your door, the way that Goji will, and it doesn't offer a complete built-in lock, like the Kevo. As for looks, the Lockitron isn't ugly (the sheer simplicity of the thing will likely appeal to minimalists), but I have to admit that it looks a little bit clunky next to a sleek-looking device like the August.

Still, compared with the competition, Lockitron does seem to have a wider range of usability built right into it, especially when it comes to compatibility, and this will likely make it the most appealing smart lock for a lot of consumers. No matter what kind of phone you use, whether it's an iPhone, an Android device, a BlackBerry, or even an old flip phone you've stubbornly been clinging to, you'll be able to control the Lockitron with it. iOS and Android users will get the most bang for their buck, but people with other kinds of phones won't be left locked out, either. Other smart locks are designed exclusively for smartphone users, and some -- like the currently iOS-exclusive Kevo -- are even narrower than that.

How smart are these smart locks? Another unique feature that the Lockitron boasts is a built-in accelerometer. If someone knocks on your door, the Lockitron should be able to detect the vibrations, then send you a text alert on your phone. We saw a similar feature with Schlage's Camelot Touchscreen Deadbolt, which could be programmed to sound an alarm if it sensed someone trying to break your door down. I can see a lot of usefulness there, but also wonder if such a setup might be prone to false alerts.

More worrisome is the fear of false unlocks -- though to be fair, this applies to all of these new devices. Suppose you have your iPhone paired with the Lockitron over Bluetooth. The door unlocks automatically as you approach, which is an awesome feature if you're carrying two armfuls of groceries in from the car. What about when you're already home, though? If you leave your phone on a table by the door, will the Lockitron get confused? If someone knocks and you approach to answer with your phone in your pocket, will the door go ahead and unlock before you want it to? How does it tell if you're inside the house as opposed to outside? These are the kinds of things that I'm itching to test out.

Those worried about their locks getting hacked can take some peace of mind from the fact the Lockitron uses the same level of encryption that banks use for online transactions. As for power, Lockitron runs on four AA batteries (included), which should last you about a year. When they're running low, Lockitron will send you alerts that it's time to replace them. If you miss this alert and the batteries die, you'll still be able to get in using your key. If your home's power or Internet connection goes down, Lockitron's Bluetooth and NFC capabilities will still work (along with the key), though the app will be temporarily rendered useless.

The jury is still out on whether any of these new locks will be able to rise above the others, but with tens of thousands of preorders already in, Lockitron looks to have a bit of a headwind as Apigy begins shipping units out. Almost every smart lock that we've seen is hovering around $200 in price and Lockitron is no different, but at $179, it is the most affordable one out there, if only by a slight margin. Whether or not it's worth the money is going to depend on how reliably it performs, so stay tuned for our full review, coming soon.