How much electricity does a light bulb use? And how much does it cost?

Turning off the lights as you leave a room is something that’s been drummed into most of us from childhood. But how much electricity does a light bulb use? And how much does it cost?

Whether it’s dark winter evenings or early mornings, our light bulbs tend to be on a lot of the time, so it’s a good idea to know how much it costs to keep the lights on. Different types of light bulb use different amounts of power, as do varying wattages.

We’ve worked out how much you can expect to spend per hour on electricity for the light bulbs in your home. We’ll also explain how to save energy at home by making the right lighting choices.

How much electricity does a light bulb use?

Many of us associate wattage with the amount of light a light bulb gives out – a dimmer 25W bulb compared with a brighter 60W bulb for example – but the wattage of a light bulb actually equates to the amount of electricity it uses. Brightness is measured in lumens.

This is why it’s common to see lower wattage bulbs described as ‘equivalent to 60W’ – it’s not the energy they require that’s equivalent, but the brightness.

The best way to work out how much energy your light bulb uses is by converting the wattage to kilowatts. So, a 100W light bulb would require 0.1kW an hour. 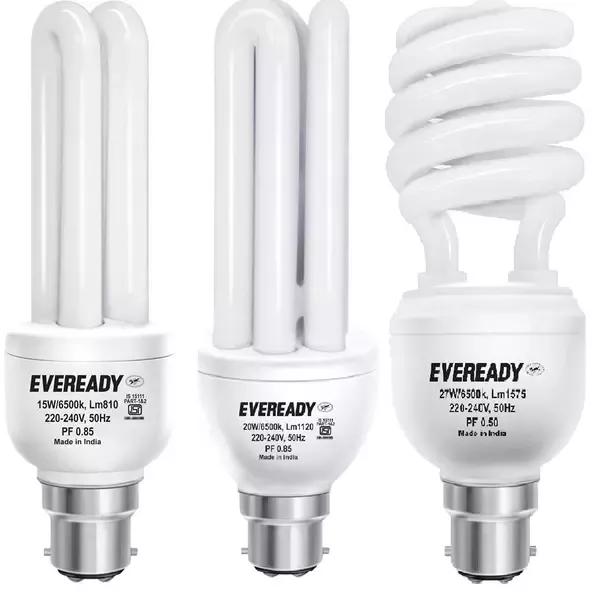 And how much does it cost?

According to the Energy Saving Trust the national average price (as of November 2021) per pence/kWh of electricity is 20.06p. We have rounded it to 20p for illustration purposes.

‘Lighting accounts for 15% of a typical household’s electricity bill,’ reveals Steve Buckley, head of data science at energy-saving app Loop. ‘Quality LED lights cost more than other types of lighting, but it’s a price worth paying. If you replace all of the bulbs in your home with LEDs, then for an initial outlay of £100 you’ll save about £35 a year on your energy bill.’

What energy saving features should I look for when buying a light bulb?

These handy light bulb functions and features will help you save over time.

Smart light bulbs that are controlled by an app, such as Hive or Hue, open up a whole world of energy saving options. These include being able to set lights to switch off at sunrise, so they’re not on longer than they need to be, to turn off all your light bulbs at once, or flick off lights in another room that have been accidentally left on.

New light bulbs are rated from A to G, with A being the most efficient, so you can see the energy efficiency at a glance. The label should also show energy consumption for 1,000 hours of use so you can easily work out how much it’ll cost to power each one.

The lower the wattage, the less electricity a light bulb will use. Look for energy saving bulbs that provide the brightness you need (shown in lumens) with the lowest wattage possible.

How can I cut the cost of running a light bulb?

‘LED lights can help reduce the average person’s carbon dioxide emissions by up to 40kg a year – the equivalent to driving a car 40 miles,’ says Matt Manning. ‘By switching from a 100W incandescent bulb to an LED light bulb, the Energy Saving Trust estimate that you can save up to £9 per bulb per year, based on a 1,100-lumen bulb running for 562 hours.’

While older dimmer switches didn’t save energy – adding resistance to the circuit, which was turned into heat rather than saving energy – modern dimmer switches work differently. They reduce the flow, which can also prolong the lifespan of your bulb.

However, it’s worth noting that the saving is rarely linear – for example, dimmed halogen bulbs are less efficient. Check your light bulbs are compatible before installing a dimmer switch, too – not all LEDs and CFL bulbs will be.