We may earn a commission for purchases using our links. Learn more.

Smart plugs are one of the easiest ways to jump into the smart home craze, thanks to their simple plug and play nature, making "dumb" devices instantly smart. When it comes to price, most smart plugs hover around the $20 mark, however, a recent wave of even more affordable options has hit the scene, promising the same for less.

The Gosund Mini Wi-Fi Smart Plug is one of the new cheaper alternatives, coming in under $10, and gets even cheaper when bought in packs of 3 or 4. We recently gave this affordable plug a spin, and found that it surprisingly works as advertised, but getting there had some hurdles, and its app experience was certainly not the best around.

Bottom line: The Gosund Mini Wi-Fi Smart Plug is an affordable option that ultimately works as advertised, however its no frills app and set up experience requires some patience.

The Gosund Wi-Fi Mini Smart Plug utilizes a three prong electrical connection to your homes outlets, which is par for the course for plugs. The "mini" portion of the plug refers to its size, making it only capable of supporting one device at a time, unlike dual outlets from more expensive competitors. Gosund's plug is all white, and its front consists of the receptacle, and the company's branding, but overall it is a device that will blend in with its surroundings.

Around the side of the plug is a small button that sits flush with its compact frame, enabling on device control. The button itself houses an LED status indicator in the shape of a standard electrical symbol which glows red or blue depending on its current state.

As its name implies, the Gosund Mini connects directly to your home network via Wi-Fi, without needing an additional hub. This allows the plug to react to commands sent when at home, or while away, via an app or through a voice assistant. In-app features include smart plug staples such as timers and tap to toggle controls, which also extends to voice assistant platforms as well.

Aside from the Gosund Mini Wi-Fi Smart Plug's low price-point, this smart plug has some other great things about it. One is its clean, compact design, making it seem more like a traditional device timer, or remote control outlet. The Gosund Mini features a circular frame, somewhat mimicking a standard North American outlet, which is unique for the category, and makes it look good compared to the bulky designs from other manufacturers. 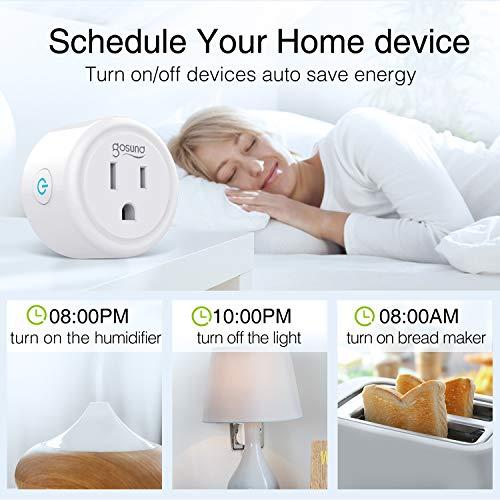 As with most smart devices, there are always the dreaded LED indicator lights on them to report their status, and the Gosund Mini Wi-Fi Smart Plug is certainly no exception to this. However, we found the level of brightness to be non-obtrusive as it performs its intended function, but isn't bright enough to keep you awake at night. Performance wise, Gosund's plug delivers responses to commands sent almost instantly, and it was reliable and available every time in its accompanying app.

Gosund Mini Wi-Fi Smart Plug: What I don't like

Despite its fantastic compact design, Gosund's plug still extends into the area over the other receptacle in a standard double outlet, meaning only one can be used at a time. On the connectivity front, even though the Gosund Mini Wi-Fi Smart Plug supports Amazon's Alexa and Google Assistant, it does not work with HomeKit. This is disappointing not just because of its lack of deep iOS integration and Siri control, but because it forces owners to use an app from a manufacturer for control, which isn't always the best experience around.

Here's where things start to get a bit odd with this plug. There are two different apps that work with it, both of which are shown on its packaging and manual. This was obviously confusing to say the least, with an app named Gosund being available, and another called Smart Life, although they did look the same outside of branding. To get our plug up and running, we had to use the Smart Life app as the Gosund app had a bug with iOS 13 at the time. We also did not like that the plug only works with 2.4ghz networks, which may cause problems if your router doesn't broadcast the frequency separately from 5ghz.

At the end of the day, the Gosund Mini Wi-Fi Smart Plug is an affordable option that gets the job done, despite its somewhat clunky user experience. This plug's low price tag makes turning all of your traditional devices into smart devices a reality without breaking the bank. Alexa and Google Assistant support can also negate some app deficiencies, although iOS and HomeKit fans are left out in the cold.

The Gosund Mini Wi-Fi Smart Plug is an affordable option that ultimately works as advertised, however its no frills app and set up experience requires some patience.

We may earn a commission for purchases using our links. Learn more.

From the Editor's desk

This week in Nintendo news, the first wave of the Mario Kart 8 Deluxe Booster Course Pass released. Additionally, fans discovered that Nintendo had filed trademarks for retro games as well as submitted a controller patent. Plus more Nintendo news.

My wallet is crying

The Switch's five-year anniversary has come and gone, with no price reductions for games in sight. When it comes to making their products accessible to those from all walks of life, Nintendo is doing a poor job.

Light all the things

HomeKit light switches are an easy way to modernize your home with the latest smart technology. Here's our guide to the best HomeKit switches on the market today.

Christopher spends most of his time writing and dreaming about all things HomeKit. If you wish to join him on his quest to automate everything, you can follow him on Twitter at @itschrisclose.