Now that Amazon has launched all-new versions of its smart displays (thenew Echo Show 8andEcho Show 5), we’ve been able to peruse the specs and see the key differences that exist between the two.

These models replace the Echo Show 8 and Echo Show 5 released a few years ago, and come with a number of key upgrades too. We’ve got all the details you need to help you decide which one to go for while we wait for our full reviews to appear.

Amazon is known for discounting its own devices throughout the year, especially duringAmazon Prime DayandBlack Friday, so we hope to see some discounts of these new smart displays later in the year.

Both the new Amazon Echo Show 5 and Echo Show 8 retain the same design sported by the current versions: A color screen on the front, with a wedge-shaped back covered in fabric that houses the speaker. 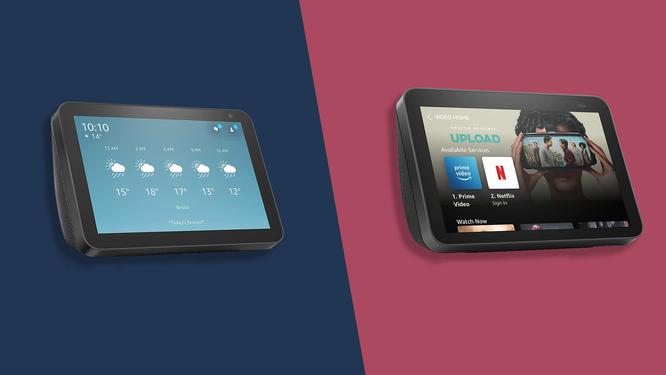 The Echo Show 8 is available in a choice of different colored fabrics; Charcoal, which is a dark grey, and Glacier White that’s well...white. The Echo Show 5 comes in both these colors along with a dark blue option.

The camera also has the same pan and zoom function as the Echo Show 10, which means during video calls you’ll always be in the centre of the frame, even if you move around during the call (a feature recently nabbed for thenew iPad Pro 2021as well).

Both the cameras on the Echo Show 5 (2021) and the Echo Show 8 (2021) can also double as a home security camera, allowing you to check in on your property from the Alexa app when you’re not there - another feature that first debuted on the Echo Show 10.

For those that are privacy-conscious, both new smart displays also have a physical camera and microphone switches that cut to the power to these features.

However it’s unlikely either smart display will be used as the main listening device, so this isn’t really an issue and both speakers will suffice for some background music.

The Echo Show 5 does have one ace up its sleeve - in the form of a 3.5mm audio out socket so you can connect an external speaker to boost the sound quality. Unfortunately there’s no audio out on the Echo Show 8, which is a little odd.

When it comes to responding to your queries and commands, both the Amazon Echo Show 5 and Echo Show 8 are evenly matched as voice assistants. However, the size is the one key difference, and if you’re planning on using one of these models as a regular video calling device, the 13MP camera on the Show 8 is going to be a real draw, along with its much-improved speaker enhancement.

What is a smart display?Smart displays have smart speakers with a touchscreen attached to them, so as well as getting an audible response from the built-in voice assistant, you can also see the information on the screen too.

What can they do?Like the best smart speakers, smart displays have a voice assistant built in and can answer a range of queries. So whether you want to know what the weather is going to be like, hear the current news headlines or get an overview of your day, these assistants can help. They can even play your favorite music and videos and answer general knowledge questions.

You can also use smart displays to make video and audio calls, act as a digital photo frame by showing your favorite pictures, and even to control your smart home gadgets,such as home security cameras, smart lights or smart plugs if you have them in your home.

How do you use it?Smart displays have microphones built-in, which constantly listen for you to utter the wake word (a phrase that makes the voice assistant spring into life). In the case of Amazon smart displays, the most common wake word is ‘Alexa’ although you can change this to ‘Echo’ or ‘Computer’ in the app.

Once you’ve said the wake word, you can immediately follow this with your query or command. The touchscreen can also be used to access some functions and apps.

Where can you use smart displays?Smart displays are mains powered so they can be used anywhere in your home there’s a plug socket. Smaller, more compact smart displays are the perfect size to use as a bedside alarm clock, although many people also use them in the kitchen, as the screens can show recipes for you to follow, and they make great kitchen timers.