Tesla’s Spending Per Car Sold vs. Other Automakers

It’s often said that word of mouth is the best form of advertising.

In the case of Tesla and their rapid ascent to the top of the global automobile business, this might be true. After all, the electric vehicle company somehow manages to spend $0 on advertising year after year, despite the fact that marketing is typically a significant expense line item for most other auto manufacturers.

On the flip side, Tesla is spending an average of $2,984 per car sold on research and development (R&D)—often triple the amount of other traditional automakers. 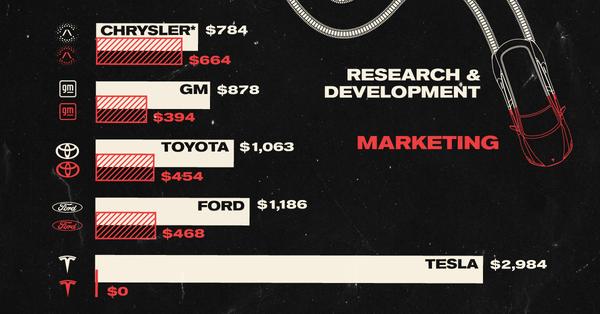 On this per vehicle sold basis, Tesla’s $2,984 in R&D spend per car is far greater than that of other car manufacturers. It’s even higher than the collective amount going to R&D per car from three of the other automakers (Ford, GM, and Chrysler) combined.

When it comes to advertising, the average spend among traditional automakers is $495 per vehicle. And while Tesla technically spends nothing on advertising, the company is a marketing machine that is rated as the world’s fastest growing brand, and Tesla often dominates press mentions and social media chatter.

The balance of expenditures between R&D and advertising is part of capital allocation, a decision every business needs to make. Generally speaking, more R&D can improve and advance the quality of either your goods or service, relative to your competitors. If executed correctly, it has the potential to lead to greater pricing power that will reflect in the margins.

In contrast, advertising can spread awareness and promote the business. But it’s a tricky balance that isn’t always easy to get right.

While capital allocation is vital, one factor that differentiates Tesla from the rest, is Elon Musk himself. With over 60 million followers on Twitter, his wild popularity has no doubt aided in Tesla’s brand recognition, where they’ve arguably become synonymous with the electric vehicle revolution.

For Americans, 85% still use an automobile as their primary method of transportation to work. As a result, automobiles will likely undergo a serious shake up as the world continues on its path towards a greener future.

With increasing investments made in the electric vehicle space—poised to be worth a trillion dollar market by 2028—how will R&D and advertising budgets of tomorrow look for major automobile companies?