INGLEWOOD, Calif. — Um. What if the Bears’ defense isn’t good?

Because it sure didn't look good in Sunday's season opener against the Los Angeles Rams.

The hope going into the 2021 season was that the Bears’ defensive window for success was still cracked open. The elite days of 2018 were probably long gone regardless, but if the defense could just keep games close, a switch to Justin Fields at some point during the season could maybe — maybe —jumpstart another late run to the postseason.

It was just one game, but yikes. The Rams averaged 7.7 yards/play in their 34-14 win over the Bears at Sofi Stadium Sunday night and the game film will look even worse when the coaches watch it.

You want a bad omen? How about giving up a wide open bomb from Matthew Stafford to Van Jefferson on the Rams’ third offensive play from scrimmage. Fortunately, Jefferson went down to the ground at the 15-yard-line after pulling in the catch. But, oh wait. Neither Bears safety — Eddie Jackson and Tashaun Gipson — bothered to touch Jefferson even though they were right next to him. Jefferson just got up and ran the rest of the way for a 67-yard touchdown.

“That's definitely a learning lesson to make sure you touch him when he's down,” Bears head coach Matt Nagy said.

That’s probably the nicest thing he could say about two veteran safeties not doing the bare minimum after getting beat deep. 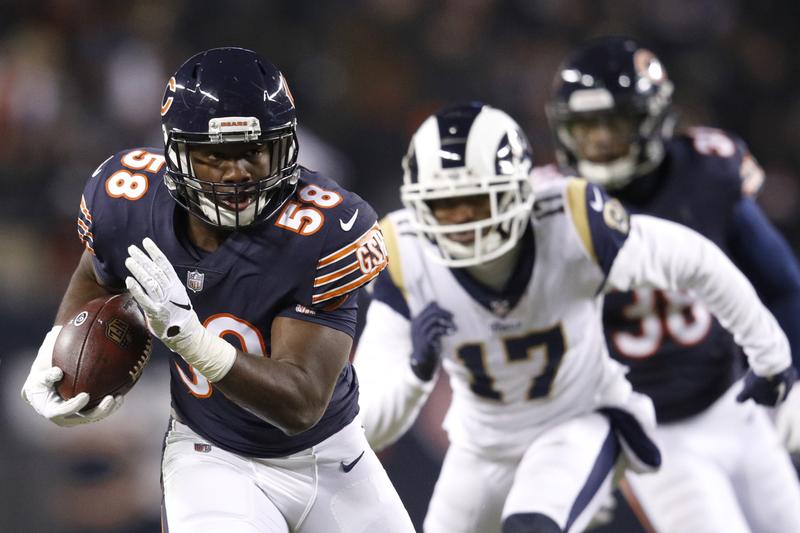 There was also the time surprise starting nickelback Marqui Christian got zero help over-the-top from either safety on a 56-yard touchdown to Cooper Cupp to start the third quarter.

And there was also the time Roquan Smith was left looking for help from his secondary after a 37-yard completion to tight end Tyler Higbee. That led to another touchdown for the Rams four plays later. Both scores came right after the Bears’ offense manage to cut the deficit down to six points.

"We know what hurt us, so it's about addressing it this week in practice, because we know it will come again next week," Smith said.

Unfortunately, Smith was left to speak for the entire defense — and the struggling secondary — after the game, as he was the only defensive player made available to reporters after the game. And even though he showed some frustration with his safeties on the field during the game, he wasn't going to criticize them publicly after the game.

So is this the real Bears' defense or is it too soon to hit the panic button? There were a few positives as Akiem Hicks looked like himself and Smith still looked plenty fast. And yet, the ongoing decline of Jackson is alarming. Khalil Mack coming out of a game with just a single assisted tackle is starting to become a more frequent occurrence. Robert Quinn was credited with a half sack, but otherwise was quiet.

The problem is, the defense being bad creates a more volatile list of possible outcomes for the 2021 season. If being a borderline playoff team was the ceiling for a team that managed to lose six games in a row last year, what’s the floor with a sharply declining defense? A switch to Justin Fields could potentially put the offense on a launch pad, but it might not matter if the defense can’t get stops.

Honestly, Andy Dalton can't win games with the defense playing like that, which only makes a move to Fields more urgent. The missed tackles, missed assignments, penalties and general lack of focus was alarming. Chalking up the performance to a few big plays allowed would be extremely shortsighted.

"Each man has to look at themselves,” Smith said. “It's not a science to it. It's wrapping up the guy with the ball and running your feet. But we all miss here and there, so it's just about getting better from it."

And yet, the misses seem to be piling up, especially for a key player like Jackson. Getting better is the only choice. Otherwise, this might be an even tougher season than originally believed.