To answer these questions, we tested the smart display against our rated categories of design, sound quality, ease of set-up and value for money to decide if we think the Amazon Echo Show 8 is worth your money.

Here is why the Amazon Echo Show 8 (2nd Gen) is one of the best smart displays you can buy right now.

To see how other Alexa speakers compare, read our Amazon Echo Dot review and Amazon Echo Show 10 review. Or, head to our best smart speaker round-up.

The addition of a higher quality 13MP camera and a new auto-framing function makes for a better video call experience. This, combined with the reliably good voice control via Alexa and 8-inch HD touchscreen, makes the Amazon Echo Show 8 (2nd Gen) a brilliant choice, irrelevant of whether this is your first smart display or you're adding to a collection.

For most rooms, the Amazon Echo Show 8 feels like the right balance between offering a good screen size to watch Netflix, YouTube and other streaming services while not taking up excessive counter space. This Amazon smart display remains one of the best on offer.

The Amazon Echo Show 8 (2nd Gen) is the brand's new mid-range smart display. This new device replaces the original Echo Show 8 that was released in 2019. At £119.99, the new Amazon Echo Show 8 has a number of new and improved features, including a higher-spec 13MP camera and a new auto-framing function. However, there's plenty of features that remain the same, including Alexa built-in, numerous Alexa skills, and it still doubles up as a digital photo frame.

The Amazon Echo Show 8 is a step-up from Amazon's smart speakers. While the likes of the Amazon Echo Dot is best suited to playing music, podcasts and responding to various voice commands, the Echo Show 8 is set up for those who are more visual. It enables you to make video calls, watch your favourite Netflix series and see who is at the door via your Ring doorbell.

The Amazon Echo Show 8 (2nd Gen) costs £119.99 and is available from retailers including Amazon, Currys and Very. 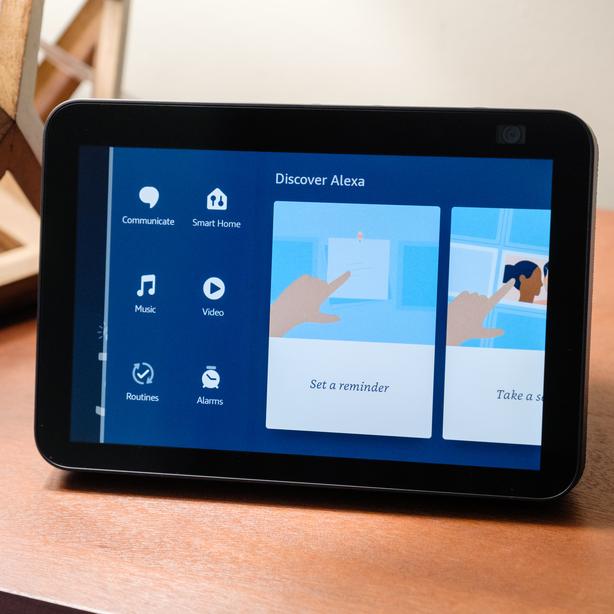 As the brand's mid-range, mid-sized smart display, the Amazon Echo Show 8 can easily fit on the kitchen counter or bedside table. The 8-inch display takes up most of the front of the device, with the 13MP camera in the top right.

While the easiest way to control the Echo Show 8 is via Alexa, the smart display also has buttons across the top for covering the camera, muting the microphone and adjusting the volume. It's also obvious when the cover is across the camera lens because it swipes across to reveal a red underside. This means that you can tell from a glance if the camera is available or not.

The touchscreen is responsive, and the default text is large enough to be read from a distance. The likes of alarms, reminders and routines can be chosen this way, although we found using the Amazon Alexa app to be easier. The app is extremely user-friendly and the easiest way to control multiple Alexa devices or to make announcements through any multi-room system you set up.

Featuring two 2.0-inch speakers, the Amazon Echo Show 8 (2nd Gen) is surprisingly good for a mid-range smart display. The device throws out well-balanced music that is of the standard of Amazon's more audio-focused echo speakers. The volume range is also pretty impressive, with the Echo Show 8 able to be turned up extremely loud. This is reassuring if you intend to use the smart display in a large or open-plan space.

But, where the device excels is with speech-heavy audio. Podcasts and audiobooks are clear, and all speech is easy to understand, even with background noise. And, Alexa remains one of the best voice assistants on the market. Alexa has no problem hearing commands over loud music or background noise and is quick to respond to any questions with the correct information.

Music, audiobooks and podcasts can all be controlled via the touchscreen, physical buttons or the Amazon Alexa app, but we found voice commands via Alexa to be the easiest. This allows you to control the smart display from a distance and is particularly useful when cooking or baking and you don't have a free hand.

Setting up the Amazon Echo Show 8 (2nd Gen) takes about 10 minutes and is fairly simple to do. Once the device is plugged in, you are prompted through the set-up process via the touchscreen. At this stage, it includes creating (or logging into) an Amazon account, choosing language settings and connecting to the Wi-Fi. Then, you're ready to go.

The majority of the settings are controlled via the Amazon Alexa app. On the app, you can see all your Amazon devices in one place, make announcements through any speaker in the house and add new Alexa skills, including Fitbit, Uber and Netflix.

Because the smart display needs to be plugged in to work, you are a little limited about where you can place the Echo Show 8. However, it is a similar story to most smart displays on the market.

Sign up for our deals newsletter to get the latest offers on TV tech, streaming, gaming, smart home and more.

First, and perhaps most obviously, is the size difference. The Amazon Echo Show 5 has a smaller 5.5-inch display, while the Echo Show 8 boasts an 8-inch HD touchscreen. This is reflected in the price. The Echo Show 5 is Amazon's cheapest smart display at £74.99. The Echo Show 8 is a little more expensive at £119.99 but still considerably cheaper than the premium Echo Show 10 at £239.99.

Choosing between the two smart displays will largely depend on your budget and how often you intend to use the camera. If you know you will use the camera daily for video calls or as an indoor security camera, it is worth spending a little more on the Amazon Echo Show 8.

Our verdict: should you buy Amazon Echo Show 8 (2nd Gen)

The Amazon Echo Show 8 offers everything you could want from a mid-range smart display. The 8-inch display means it should slot in nicely into most settings without being overbearing. However, it is also big enough that it provides a better alternative to watching Netflix series on your phone and can be used as a digital photo frame when not in active use.

It has all the features you'd want from a smart display, including Alexa built-in, a good-quality 13MP camera and a speaker that pumps out impressive sound for its price. Admittedly, it doesn't have a built-in Zigbee smart home hub, which would give you better control over managing your Alexa compatible devices, but that doesn't stop you from being able to connect your smart lights or plugs and using the Echo Show 8 to turn them on or off.

The Amazon Echo Show 8 (2nd Generation) is available at a number of retailers, including Amazon.

For more reviews and product guides, head to the Technology section.