Switching between iPhones and Android phones has never been easier, with both operating systems offering tools to move your apps and as much data as you can between devices. Now, Google just made the switch even more painless as it now lets you transfer WhatsApp chats between iPhones and Pixels with a new update. 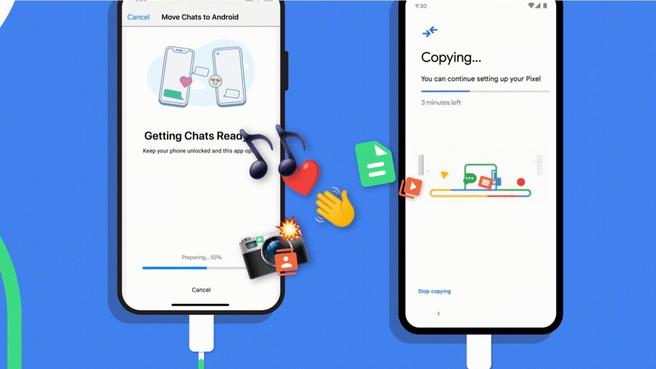 Despite SMS and iMessage’s popularity in the U.S., WhatsApp remains a widely used messaging app in every other country. While the service makes moving to new phones in the same ecosystem seamless, it’s often been impossible to switch between devices running on different operating systems. A switch between an iPhone 8 to an iPhone 13 might work fine, but trying to move your WhatsApp account to a Pixel 6 would mean leaving all your messages behind.

Now, Google has worked with WhatsApp to make it possible to transfer chats between iPhones and Androids phones. All users need is a USB-C-to-Lightning cable and both phones on hand to initiate the process. It’s not yet able to transfer your messages from an Android phone to a new iPhone just yet, but we expect that’ll be coming soon.

Google announced the update this week, alongside a new Android 12 feature that will help you bring your SMS and iMessage history to your new Pixel, as well as automatically install all of your iOS apps with their Google Play counterparts. The feature first debuted with Samsung phones alongside the launch of the Galaxy Z Flip 3 and Galaxy Z Fold 3 and is now available on all Pixels. Google says that phones launching with Android 12 will have the feature too and other Android phone makers can choose to implement it on their pre-Android 12 devices if they want.