Curry, Moody injured: Just when the Warriors were beginning to get healthy, the injury bug reared its ugly head again.

Stephen Curry was forced to leave the game after suffering a left foot injury while diving for a loose ball in the second quarter.

Boston’s Marcus Smart dove for the ball and landed on Curry’s lower left leg and foot. Curry initially tried to walk off the pain during a timeout, but eventually went to the locker room. He departed having scored three points on 1-of-4 shooting.

“I’d expect Marcus Smart to make that play,” Draymond Green said. “He plays hard. I can’t call that a dirty play as unfortunate as it is. If it were a dirty play I would’ve went and dove into his head. I had a really great look at the play. I was right up top. Maybe unnecessary? But that’s the most I can call it.”

Before the start of the second half, the Warriors said Curry would not return. Head coach Steve Kerr said after the game that Curry was undergoing an MRI.

Curry’s injury came just 48 hours after he, Klay Thompson and Green were able to play together for the first time in more than 1,000 days on Tuesday. In that game, Green returned after missing two months with back and calf injuries. And prior to that, Thompson had missed 2½ seasons recovering from torn ACL and Achilles injuries.

“Adversity hits everybody at any time,” Kerr said. “You just roll with it and keep moving forward. So hopefully Steph will be OK.”

In addition to Curry, rookie Moses Moody didn’t return after injuring his right shoulder earlier in the second quarter.

Early on it was clear that the Celtics meant business at that end of the court. They were pressing guards out on the perimeter and staying attached to Golden State's shooters. Boston was also extremely active in passing lanes, which led to steals and easy layups. And they played physically in the paint and didn’t give up much at the rim.

The Warriors scored only 32 first-half points, shot 29.3% in the first two quarters, and trailed by 16 at the break.

There was a play late in the first quarter pretty much summed the first half for Golden State. Poole was struggling to get around Derrick White, so he kicked the ball to Damion Lee in the right corner, then got it back on a quick cut to the basket. It looked like Poole would get an easy layup, but Robert Williams rotated over from the weak side and blocked the shot with both hands.

“They have some mobile bigs so they can switch a lot of stuff,” Juan Toscano-Anderson said. “That’s what makes things easier for them. When you can switch pin-downs and ball screens, to hell with the gameplan just keep the ball in front of you and be aggressive on switches. I’m pretty sure that’s what they do.” 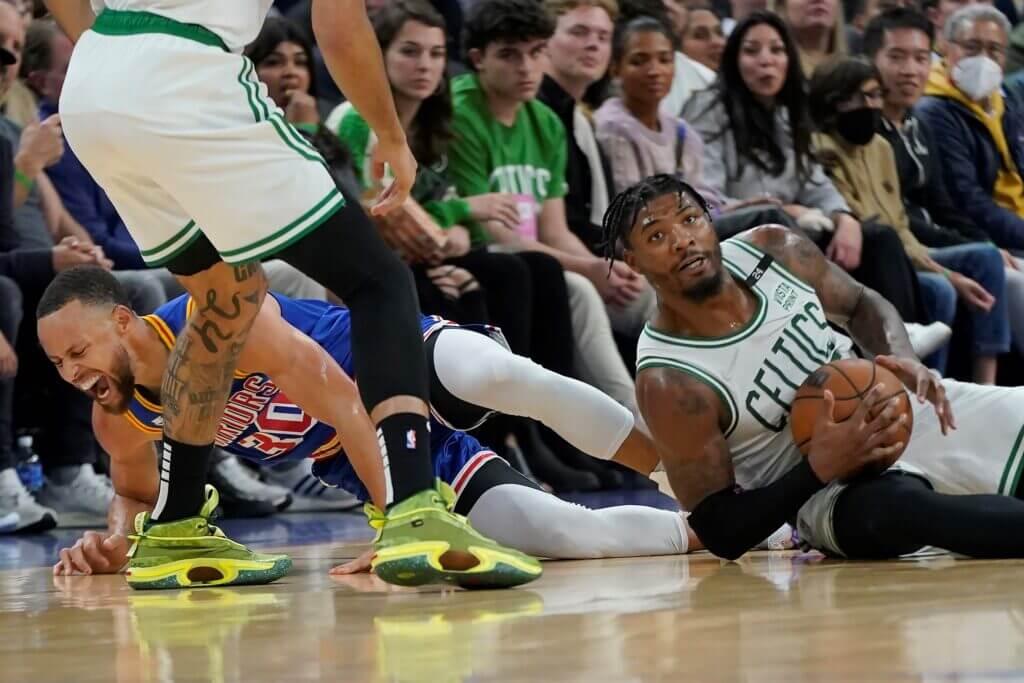 The second half was a different story. Poole, held to two points in the first half, went off for 19 in the third quarter. His inspired effort helped cut Boston’s 16 point lead to 10, and gave the Warriors new life entering the fourth quarter.

Golden State ultimately couldn’t complete the rally, but Poole did his share. He finished with 29 points, two rebounds and three assists. Entering Monday’s game, he had averaged 24.1 points, 3.3 rebounds and 4.7 assists over his past seven outings.

A few positives: Green hit the deck multiple times throughout the game and sprang back to his feet each time. With Curry out, he also started the second half.

“The way we’ve tried to approach this is so I’m not sitting for long stretches,” Green said. “Then I started the second half because Steph was out for a long stretch. Coming back, it was rough. If anything bothered me in terms of physically, it was that. But I feel great.”

Green picked up a technical foul with 1:43 left in the second quarter after with arguing a referee after Thompson was called for a foul on what he saw as a clean steal.