“Pillar of Stability: The Evolution of the U.S.-Greece Bilateral Relationship”

Question:Ambassador Pyatt, you have been Ambassador for the entire duration of this upswing so far.You came in on the back end of one crisis Russia provoked in Ukraine, when there were some concerns over the bilateral relationship.You end your tenure in the midst of another crisis in Ukraine, but with Greece as a pillar of stability.Are there two or three tipping points that got Greece to the “pillar of stability” point?

Ambassador Pyatt:Thanks Lena, and thank you to the organizers for putting together this panel with three very good friends.In particular, Thanos [Dokos] and Evan [Kalpadakis] really have been two of the key intellectual engines of Greek foreign policy in the two governments that I’ve worked with.And then George [Koumoutsakos] played a critically important role for me as shadow Foreign Minister when ND [New Democracy] was in opposition.Eventually I’ll have to write some things about my time as Ambassador and I’ll have to save the good stuff for that.But just to say there are a number of important anecdotes and moments where George played a really critical role in helping us to set the stage for this new era of U.S.-Greece relations.

You asked about the benchmarks.I would say generally I have found as a diplomat now over far too long, these things are less like a light switch where it sort of comes on and off, and it’s more like a dimmer where the light shifts and all of a sudden you discover that you’re in a much brighter room.

I would say in that context there are probably three different light streams that have an impact here.The first and the most important of course is Greece’s recovery from a really devastating decade-long economic crisis.It’s hard to remember now when we’re talking about Pfizer and Microsoft and AWS, the impact that losing 25 percent of GDP had on Greek society, on the politics, but also on the bandwidth available to have a more outward-looking foreign policy. So that would be number one.And certainly that escape from economic crisis was the first priority of my tenure when I first arrived.It was the major issue, as Evan will remember, when President Obama met with Prime Minister Tsipras right before he went on to his farewell visit to Berlin.

One of the things that putting that period behind Greece allowed was the bandwidth and the time, the scope to have a more ambitious foreign policy.We saw that beginning under Syriza and obviously we’ve talked a lot about that over the past two days.The 3+1 process.I’m very proud of U.S. leadership through two administrations in that regard.Our Strategic Dialogue which has been so important in driving ahead the various pillars of our engagement.

The Prespes Agreement.Imagine how different the picture would be today in the face of Russian revanchism if the relationship between Greece and North Macedonia was still unresolved, and North Macedonia didn’t have the security that comes from being a member of NATO.And how much different the picture would be if Russia was able to leverage that fact not just in places like Serbia and Bosnia but also to Greece’s immediate north.

I would also say Prespes played a critical role in changing perceptions of Greece’s foreign policy role here in Washington.I remember sitting down with Secretary Albright, who I worked for in different contexts, right before I went to Athens, and we talked about a lot of issues, but one of the things that stuck with me was her admonition, “Can you do anything about that name issue?It’s just such a burden on the relationship.”So I really would highlight the importance of that.

And now, under Prime Minister Mitsotakis’s government, you’ve seen this effort to develop a more ambitious and strategic Greek foreign policy approach reflected in Foreign Minister Dendias’s engagement with India.All of the work that Greece has done to leverage the Abraham Accords and Greece’s strong relationship not just with Israel but with its Arab neighbors.The Greek role in North Africa, including on Libya.So those have all been a factor.

And then finally I would say the other stream that I would highlight is the simple fact of Prime Minister Mitsotakis’s election in 2019.It’s important that he came to office with a clear intention to deepen and accelerate the U.S.-Greece relationship.He demonstrated that incredibly fast.We forget the first amendment to the MDCA, which added these different facilities that Katerina and Admiral Foggo were just talking about, happened in September/October of 2019.So just a few weeks after the government had come into power.That doesn’t happen in our bureaucracy or in the Greek bureaucracy, and it was because of the direction that came from the Prime Minister. 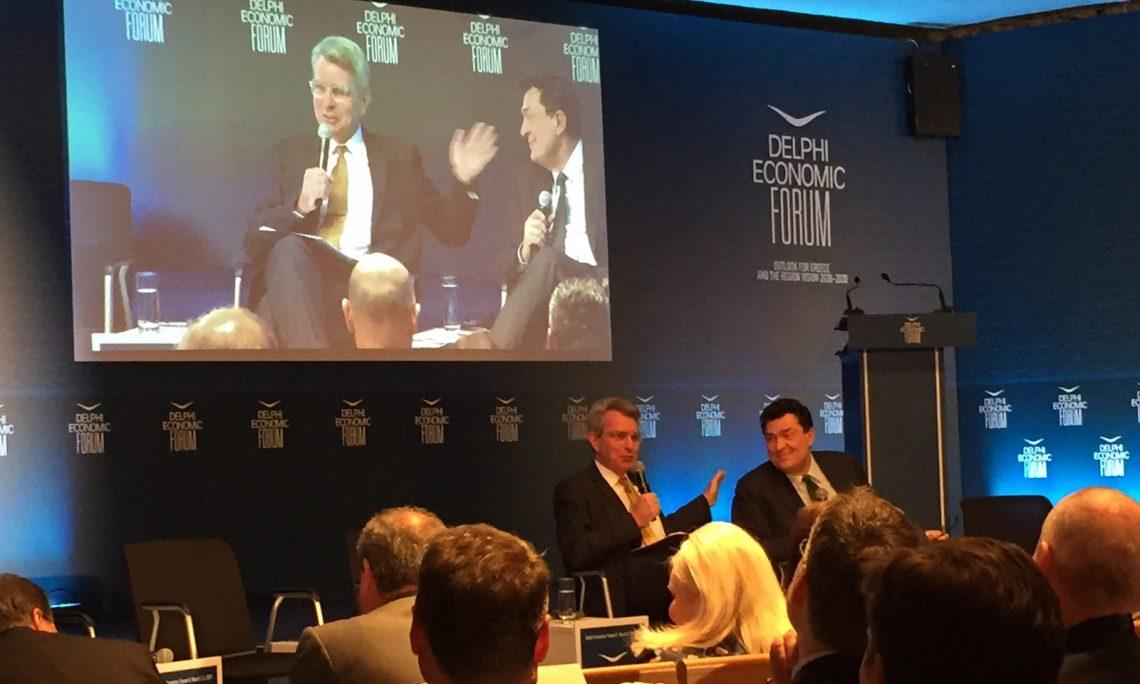 Just last October, when Foreign Minister Dendias was here, as you know, we signed the indefinite extension of the MDCA and we added additional facilities.All of those different facilities at Larissa, at Volos, Stefanovikio, at Alexandroupoli, at Souda Bay, have played a critical role in the U.S.’ ability to respond as clearly and rapidly as we have to Russia’s invasion of Ukraine.

And I would simply highlight something a number of speakers have alluded to, especially the Congressional leaders who were here earlier.This is the defining issue for American foreign policy in the years ahead and certainly in our transatlantic relationship.And it’s really important that the Greek government got this right, that Prime Minister Mitsotakis, Foreign Minister Dendias, Thanos Dokos, and others have spoken as clearly as they have, that Greece responded so quickly.

Greece was, as Karen Donfried said this morning, one of the first allies to step up in response to the Ukrainian request for lethal assistance to help the Ukrainian people to defend their own sovereignty.And that robust response is also setting the context for how we are going to work together to build whatever comes after this invasion, because clearly the security environment in Europe and the transatlantic community has changed.

Question:Greece is one of many U.S. allies and partners that are in an awkward position during this crisis.Many of them – including Turkey, Israel, and India, where you have also served – have not taken a clear stance on Ukraine the way Greece has. As a result, we see Russia confronting Greece while Turkey continues with air violations and the same rhetoric.What is it about the improved bilateral relationship that should make Greece, its citizens, and the Greek American community here feel comfortable that when Athens makes correct but tough choices Washington will have its back?

Ambassador Pyatt:A couple of points.First of all, this really comes down to what Prime Minister Mitsotakis said in Parliament.This is a question of Greece being on the right side of history.And clearly Greece is demonstrating that as Thanos has just described.

The nature of our alliance and the decades-long collaboration between our two countries is not defined by a quid pro quo kind of scorekeeping.It’s rather how we work together to enhance each other’s respective security.

Speaking at least from my tenure as Ambassador, I think we have a very strong record in that regard.And just to think about the period of the Mitsotakis government, remember how clearly the United States responded to the migration crisis of February 2020 and Ankara’s decision to use tens of thousands of innocent victims as an instrument of pressure on Greece and the European Union.

Remember the way that the United States responded in the summer of 2020 to the very severe military crisis between two NATO allies including the collision between two warships in the middle of the Eastern Mediterranean.

And I don’t know if he’s in the room yet, but I know Secretary Pompeo will be speaking shortly, and I would encourage somebody to ask him for the story of his visit to Souda Bay.I will tell the bureaucratic aspect of it, which was a couple of weeks before that trip Secretary Pompeo called me up and he said, “Geoff, I’m thinking about a trip to Greece.What should we do?”I said to him, “My staff will kill me, and the EUR Bureau will kill me, but what I’d really like to have you do is go to Thessaloniki because we’ve never had an American Secretary of State there, and I’d like you to go to Souda Bay because of the message that would send of U.S. presence and U.S. engagement in the Eastern Mediterranean.”And I’ll let Secretary Pompeo speak for himself regarding the other aspects of that.But that was a critical signal at a very intense time.

And then we only have to look to the past couple of weeks and the very strong and immediate U.S.-Washington response to Turkey’s rhetoric questioning the sovereignty of Greek islands.You heard Karen Donfried this morning reaffirm our very clear position on that.And I would just point out, I was very proud that it was actually the European Union weighing in after the United States to make that obvious point about a fellow EU member state.

So I think we’re actually doing pretty well in that regard, and the whole point of our collaboration is it’s not about scorekeeping.It’s about the way in which the United States military presence in Alexandroupoli, in Souda Bay, in Volos, in Larissa makes our alliance stronger, sends a message to our adversaries, and certainly makes Greece safer and more secure.