The TP-Link Deco W7200 ($229.99) is a two-piece mesh system designed to deliver seamless Wi-Fi 6 networking to homes of up to 5,500 square feet in area. As with other Deco systems, it is easy to install and comes with TP-Link’s HomeShield network security and parental control software. It performed admirably in our throughput and signal strength tests, too, which makes it a strong choice for homes with at least three bedrooms. But if you want superior performance with lots of connectivity options, you’ll have to spend another $200 or so for our Editors’ Choice-winning Wi-Fi 6 mesh system, the Asus ZenWiFi XT8.

No Art in These Decos...Just Wi-Fi

The W7200 consists of two identical cylinder-shaped nodes that stand 6.7 inches in height and are 4.1 inches wide. They're stylish, clad in a white finish with a black top, but they're far more modern-looking than they are Art Deco-inspired, in case you're wondering about the brand name.

The nodes sport a small LED indicator on the front of the base that glows green when the nodes are connected, blinks blue during setup, and glows solid red when there is a connectivity issue. Around back are two gigabit LAN ports and a power jack. On the base, you'll find a reset button. This system does not offer the multi-gig connectivity that you get with more expensive systems such as the TP-Link Deco X90 and the Asus ZenWiFi AX (XT8). It also lacks USB ports.

The W7200 covers homes of up to 5,500 square feet with two nodes, and it can be expanded by adding any Deco component, such as Deco X20 or Deco X60 nodes. It’s a tri-band AX3600 system that can reach maximum (theoretical) speeds of up to 574Mbps on the 2.4GHz band, 1,201Mbps on one 5GHz band, and 1,802Mbps on the secondary 5GHz band. By default it uses the 1,201Mbps 5GHz band exclusively for wireless backhaul, but you can free that up with a wired backhaul configuration if you connect the nodes with an Ethernet cable.

Each node is powered by a 1.5GHz CPU and is equipped with five internal antennas. This is a Wi-Fi 6 (802.11ax) system that supports direct-to-client beamforming, WPA3 encryption, 3X3 MU-MIMO data streaming, and OFDMA packet transmissions. However, it does not support 160MHz channel bandwidth, which means it's limited to a narrower bandwidth than the fullest-featured of Wi-Fi 6 routers like the ZenWiFi XT8. 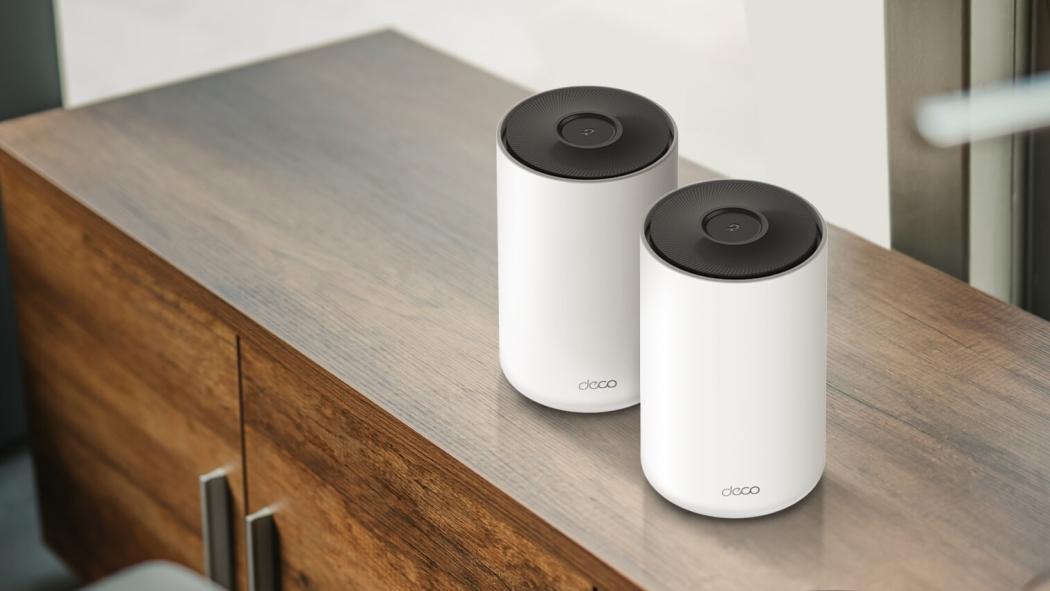 The W7200 uses the TP-Link Tether app for iOS and Android mobile devices, and can also be managed via a web-based console. The mobile app opens to an Overview screen, which contains an Internet icon and displays a list of online and offline devices that have joined the network. Tap the Internet icon to view a list of network nodes, their location, and which clients are currently connected to each node. Here, you can assign bandwidth priority and flip a switch to deny access to any client.

At the bottom of the screen are Overview, HomeShield, and More buttons. The Overview button returns you to the home screen from wherever you are in the app. The HomeShield button opens a screen with network security tools and reports, as well as options for configuring parental controls and QoS settings. The W7200 comes with a free Basic version of HomeShield, which lets you perform network security scans. You’ll have to subscribe to the $5.99 per month Pro plan to access DDoS protection, malicious content filtering, and port intrusion protection features.

Parental Controls under the Basic plan let you create user profiles, set age-based content filters, block websites, and pause the Internet for specific users. But you’ll need the Pro plan to view individual traffic usage, set time limits, and offer Time Rewards (extra online time) as incentives for things like completing chores or finishing homework assignments. You’ll also need the Pro plan to view detailed reports that tell you how long a user has been online, which websites they have visited, and which devices they are using to connect to the internet. Use the QoS settings to set bandwidth limits and assign bandwidth priority to individual clients for 1, 2, or 4 hours at a time.

The More button opens a screen where you can configure Wi-Fi, LAN, DHCP, and Port Forwarding settings. Here you can also create blocklists to prevent specific devices from accessing your network, use WPS to add devices to your network, update the firmware, and configure notifications that tell you when a new device has joined the network.

Do It All in the Deco App

Installing the W7200 system was quick and easy. I downloaded the Deco app, created an account, and tapped the Let’s Begin button at the bottom of the opening screen. I selected the W7200 from the list of Deco models and followed the onscreen instructions to power off my modem, connect a Deco node to the modem, and then power everything back up.

I confirmed that the node’s LED was blinking blue, connected my phone to the node’s SSID, and waited a few seconds for the phone to connect to the node. I gave the node a name, selected the internet connection type, and gave the new network a name and password. After about 20 seconds the network was created, so I tapped Next to add the second node. To do this, I simply plugged in the node, and after two minutes, it was automatically added to the network. I gave the node a name, and the installation was finished.

The W7200 turned in impressive scores on our throughput performance tests. The router node’s score of 771Mbps on the close-proximity (same room) test was faster than the Eero Pro 6 (701Mbps) and the TP-Link Deco X20 (654Mbps) but not nearly as fast as the Asus ZenWiFi XT8 router node (860Mbps). On the 30-foot test, the W7200 router managed 298Mbps while the Eero Pro 6 and TP-Link Deco X20 delivered 230Mbps and 225Mbps respectively. Once again, the Asus ZenWiFi XT8 router led with a score of 347Mbps.

To test wireless signal strength, we use an Ekahau Sidekick Wi-Fi diagnostic device and Ekahau’s Survey mobile app to generate a heat map that illustrates coverage throughout our test home. (Ekahau is owned by Ziff Davis, PCMag's parent company).

Darker green areas on the map represent the strongest signal measurements, and lighter green and yellow areas show a weaker signal. The circles represent the location of the router and the satellite node. As shown on the map, the Deco W7200 system had no trouble delivering a relatively strong signal to all corners of our test home.

The TP-Link Deco W7200 Tri-Band Wi-Fi 6 Mesh system is a solid choice for anyone looking to spread Wi-Fi corner-to-corner in homes of up to 5,500 square feet. It is easy to install and manage, can be expanded with any Deco node, and comes with good parental controls. Both the router and the satellite node provided impressive throughput performance in testing, and both components combined to deliver a strong signal throughout our test home.

While it supports most Wi-Fi 6 technologies, it doesn’t offer 160MHz channel bandwidth, and it lacks multi-gig and USB connectivity. For those features, you’ll want to check out our Editors’ Choice pick, the Asus ZenWiFi XT8. It’s more expensive, but it’s one of the fastest mesh systems that we’ve tested, and it comes with strong lifetime parental controls and network security software.