Stranger Of Paradise: Final Fantasy Origin is a Soulslike that swings so hard it misses

Before we get stuck in, here's the sitch. PC code for FF Origin went out a bit late, so the thoughts below are my initial impressions of the game based on the chunk I've played so far, which is about half the game. This isn't a full review, but I also can't see my thoughts changing. Anyway. Let's embrace Chaos.

Stranger Of Paradise: Final Fantasy Origin is a Soulslike Final Fantasy spin-off that swings so much it misses. Your sole focus is to kill a bad guy called Chaos and the game provides fights and loot in their hundreds, possibly thousands, to ensure you're beefy enough when the time comes. But cut away the combat and you're left with little, really. Search for anything other than Chaos and you'll find there's nothing else driving you forwards. You'll finish the game and part as strangers still, probably.

Final Fantasy Origin isn't a direct retelling of the original Final Fantasy, but more of a story that takes place in a parallel universe. And it's home to one Jack Garland, a chiselled bro who'd really like to kill Chaos. He reiterates this a lot, often grunting his displeasure when his 'friends' talk about anything else. Ash, Jed, Neon, Sophia; they're all incapable of normal conversation anyway, often saying things that render any real discussion impossible. "Lots of bats in here," says Ash, as bats fly around. "I think I was here... once," says Neon, to a resounding silence.

Jack shares one thing in common with his compatriots: they each carry a glowing alien egg, like the ones you'd win at the local arcade. It seems to be their way of identifying each other as the chosen Warriors Of Light who must rid the world of Chaos. I'm convinced this is because their parallel universe is actually a fabrication swimming in Jack's mind. I picture Jack -who's bigger than everyone else in his year – playing pretend with his classmates. He's the hero calling the shots as they mime sword swings before the bell rings.

This would explain why the story bounces around with as much cohesion as two space hoppers tumbling down the M5. Jack doesn't care for anything other than Chaos, cutting dark elves off mid-sentence with a scowl, and asking them if said Chaos is involved. Oh, he isn't involved? Then Jack doesn't care. His thirst for Chaos is undeniably hilarious, but it overrides any semblance of a meaningful story. Comedy value can't make up for shallow characters and a universe that's built more through exhaustive textboxes than anything else. It's ironic that Jack's sole desire to kill Chaos ends up killing your own desire to play. 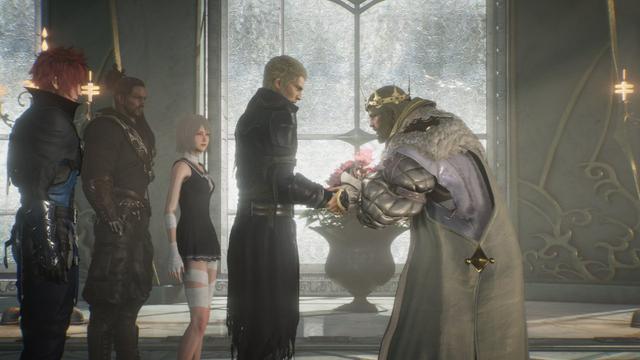 And the game's juddery story means the only thing keeping you engaged is the Soulslike rhythm of combat and exploration. Seeing as it's Team Ninja, everything from the level design to the bare-knuckle brawling has Nioh plastered all over it. You've got an overworld map that'll send you off on missions set in re-tooled versions of iconic Final Fantasy locations: the Mako Reactor from FF7, pirates in a coral cave, Coeurls lurking in a forest. They are recognisable, sure, but their grandeur is lost to samey corridors and flat rooms filled with a few monsters. Your aim is to batter these enemies, move between checkpoints, and beat the final boss.

Nioh's story isn't great, but it makes up for it with clever, intertwining maps and impeccable combat. The complex loot grind is worth learning because it makes replaying levels an experiment or a power fantasy, not a chore. Final Fantasy Origin retains Nioh's strong combat core, but also keeps a similar loot grind that feels out of place because there's no real incentive to get involved.

The game takes FF's Job system and ports it wonderfully into a Soulslike template. Jobs are the equivalent of classes here, each complete with their own combos and skill trees. There's loads to choose from, like Mage, Lancer, Ronin, and Pugilist to name just a few. Jack can switch between two Jobs on the fly at the press of a button, and if you'd like to switch up one or both roles, you can easily do so in the menus. Level up your Jobs and you'll earn points to spend in these trees that'll unlock new moves or passive bonuses. The MMA fighter-esque Pugilist is a favourite Job of mine, as it feels distinctly Jack. You just pound skeletons and Tonberries to a pulp with roundhouse kicks and fist-flurries. No need for dainty swords or lances when you've got your knuckles.

The flow of combat feels quick and snappy, with Team Ninja's signature combo-laden flashiness. Whether you think about the buttons you're smashing or mindlessly hammer away, you'll look cool. The variety on offer is outrageous, really, with loads of armour and weapons and moves and stats to shift up and down and around. Enemies have different types of attacks, signaled by a little pop-up box above their heads that comes in three colours. Parrying lets you steal an enemy's ability and hurl it back in their faces, and it never gets old.

Some Jobs work better against certain enemies, but it's largely personal preference that prevails. Most missions just aren't that exciting, either, as they're corridor dashes with the odd gimmick, like dodging laser beams or finding keys so you can move on... to more corridors. Almost all the fun lies in the punches you swing, as there's nothing else driving you forwards. It's certainly not the story, or the promise of a new level and it's gimmick. Eventually, the repetition drags, which robs the loot you're hoovering up of its wow-factor too. Suck those epic greaves or hulking halberds into your inventory and they join the rest of your fast fashion collection. What's the point of optimising your character's spreadsheet if you're unlikely to go back and flex a designer fit?

All of Final Fantasy Origin's depth lies in shoving more loot in your wardrobe. Fun lies in crashing and bashing and occasionally laughing at Jack's gruff comments. Otherwise, this doesn't feel like a Final Fantasy game at all. There's no reason to exist in this world other than to suplex Chaos into the dirt, which is apt I suppose. But it's single-minded approach - and protagonist - means you probably won't be coming back when Chaos taps out.