Smart Plugs Don’t Save You Energy, But Don’t Consume Much Either

Amazon Alexa, Google Home, and just about every electronic device manufacturer are jumping on the bandwagon of connected devices. They promise us the ability to turn on our toaster from another room, unlock our doors just by shouting at them from outside, and change the channel on our TV through perfectly enunciating a sentence instead of mashing the buttons on our remotes like chumps. And yet, despite all this new-fangled finger-less control, there is an unanswered question: does this technology save us energy in the long run?

For years we’ve been hearing about vampire power and all the devices in our home that sit in standby, waiting for their masters to turn them on, quietly burning power to listen for that signal to wake. Fortunately the One Watt Initiative and general awareness and design for energy savings has cut out a lot of this phantom load. So how does the smart home, which essentially adds a bunch of connected vampires to our base load, end up saving money in the long run? And is it better than other alternatives or just good habits? I put these questions to the test with today’s smart power strips and controllable outlets.

Let’s assume that we’re talking about a single Wi-Fi Smart Plug, like the Wemo Mini Smart Plug or the Laneco cheap knockoff. Retailing for $30 and $15 respectively, we’re going to have to save that much money in reduced electricity consumption to make up the cost. Assuming $.12/kWh and the cheaper plug, that’s roughly 125kWh of energy we need to save. If you’re wondering about the amount of energy it took to make that device and how that factors in, the laws of economics say that the price of the unit should reflect the cost of all the resources that went into making it, including the cost of the energy used. The nitpickers will argue about loss leaders and external costs that are paid by others (for example, the cost of cleaning up pollution), but accounting for all of that is outside the scope. Let’s just say that the cost of the unit is what we need to make up in order to be satisfied.

While it’s plugged in and running, the unit consumes just under 1 watt, and while it is on, the Kill-A-Watt still registers under 1 watt. This adds to the cost of the device on a recurring basis.

The argument is that with this device you may use less energy overall because your devices won’t be powered as much; that being able to say “Alexa, turn off the lamp” is easier than operating a switch and thus will be done more frequently. Let’s assume they are right and that as a result of this device, you burn an LED lamp for 1 hour less each night, for a savings of 10watt hours every day. In this scenario, over the course of a year we use 9kWh to save roughly 4kWh. Oops. This doesn’t eat into our cost of the device, either. No, in order for this to make any sense at all, our smart plug has to save us a lot more energy. But remember, most of the other devices in standby are only consuming a watt as well, so controlling them via a WiFi plug doesn’t yield any net savings, just displacement. 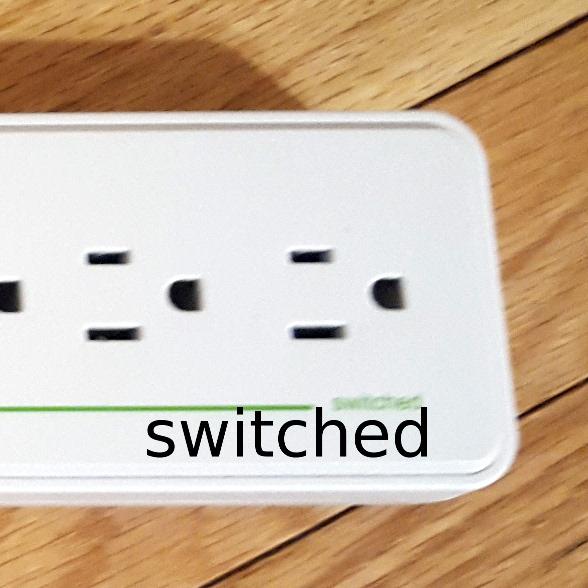 Let’s consider a much different example; an office where a TV in the reception area is left running 24/7. That’s 100 watts for 16 unused hours a day. Those 1.6kWh saved with a smart plug make up the cost of the device in 2 1/2 months, and then continue to save an additional $6/month.

While it doesn’t make sense from a pure energy savings perspective for many devices, there are some situations in which the balance can be tipped.

A recent innovation is master-controlled power strips that use the power consumption of one of the outlets as a switch for the other outlets. The idea is that if the TV is plugged into the controlling outlet, when it’s off the other outlets (like the audio equipment, game systems, and other things that use the TV) are automatically turned off, removing their vampire loads as well. When the current goes above a certain level, indicating the TV is on instead of in standby, then the other outlets are turned on. Another benefit of this equipment is that it runs independently, so it doesn’t require an internet connection and a round trip through the cloud in order to function. Hooked up to my workstation, this cuts power to the monitors, speakers, and USB hub, yielding at least a 10W saving that I would only have gained by unplugging everything otherwise, and with almost no current draw alone, the device paid for itself in under 2 years.

There are also WiFi connected power strips, and while they aren’t much better than single outlets, they do reduce the vampire load/outlet and cost/outlet ratio by combining multiple outlets into a single WiFi connected device.

For the super wealthy who hate the idea of an unsightly plug and want the smart-ness integrated into the outlet itself, there are certainly options for that as well, though some flexibility is lost.

Finally, the old crotchety man in me yearning to yell at kids to get off my lawn would like to point out that some simple habits like being diligent about turning off stuff when not using it and walking through the house to unplug stuff before going on vacation are still the best solutions for energy savings. Also, I’ve been fighting with my WiFi power strip and its distinct distaste for staying connected lately, and the amount of mental energy lost on this thing is about to exceed its value to me.

It Isn’t Always About Energy Savings

The smart home has done a lot for accessibility. For people whose mobility is lower or whose dexterity may not be enough to operate devices, voice control is a welcome relief. Even for the not-disabled, the convenience can be significant, like turning off things despite full hands. In offices, too, it can mean enormous savings as conference room screens or work areas that are normally left on can be controlled automatically.

There’s a certain coolness about being able to tell your home to do things, and additional coolness derived by speaking about it endlessly at the watercooler or to guests. Smart homes also allow you to control things remotely and on a schedule, so you are gaining new features that wouldn’t be possible without, and paying for that privilege. Feeling like Tony Stark when you tell your robot house to do things definitely has value.

As with most things in life, the benefits of smart plugs are only realized if they address your habits. Are there devices in your life that keep getting left on or that use noticeable power when idle? Running a lamp off a smart plug is a loss while running a TV off a smart plug may be a net gain. Smart strips are a net gain, especially for your computer and entertainment center.

I think that if you are going to make your home smart, it’s probably not going to be for the energy savings. You probably won’t even notice any. It’ll be for other reasons, and those are perfectly valid. With most of these systems there is an assumption that the homeowner also has a device capable of listening for voice commands nearby. But always listening also means always consuming energy without saving any, but let’s say that they are getting additional benefit from that device alone, so we won’t add it to the energy saving math.

What has the smart home done for you to make the costs worth the expenses? Are we missing something?