Should You Use Cordless Tool Battery Adapters?

By now, you may have seen the videos running around that show a converted DeWalt or Makita lithium-ion battery running a Snap-On cordless glue gun using a tool battery adapter. If you haven’t, take a look below at the one showing off the possibility and upcoming product launch. At first glance, this might look like a good idea. The possibilities of using power tool battery adapters are profound. Figure out who makes the best lithium-ion batteries on the planet and pair them with the best cordless impact driver or other tools in each class, regardless of the manufacturer by just using a battery interface.

Let that idea marinate for just a moment.

So what might the potential issues be with mixing and matching batteries and tools using a tool battery adapter?

Another video I saw (by a company that will remain nameless since I don’t want you blaming me for the consequences of your youthful exuberance) creates a system that lets you run tools at a higher-than-rated voltage. 9.6V tools run at 14.4V or even 18V! Who wouldn’t want that at their hands?

While a few of you car enthusiasts are perking up at that one, the rest of us have doubts that power tools would fare so well.

So what are the issues there? Well, if we were talking about NiCd or NiMH battery packs…probably nothing. But when dealing with current tools that use lithium-ion batteries…that’s another story.

Manufacturers design most modern tools—certainly brushless models—so that the battery and tool talk to each other. Think of it like the animal kingdom. Dogs can mate with other dogs, even of another breed. Similarly, Ryobi 18V batteries work with the tool you bought with it or any other Ryobi 18V cordless power tool.

It doesn’t, however, necessarily work if you plug it into a Ridgid tool using atool battery adapter. Dogs can’t, or shall we say shouldn’t, mate with cats.

When scientists have played with the possibility of genetic modification by pairing reproductive cells from normally incompatible animals, guess what… they don’t make it. Sometimes they linger on briefly. Sometimes they even have some form of a lifespan, but it’s pitifully shorter than what either animal would enjoy on its own. 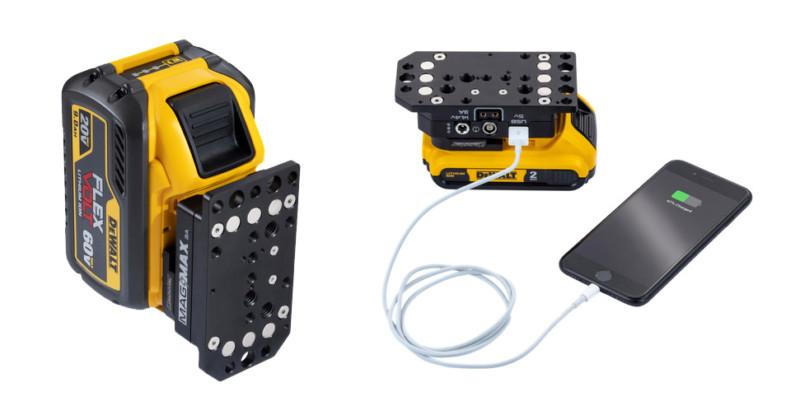 This is true of our cordless tools as well. Battery adapters are like laboratory mating. If you get that unnatural mismatched voltage pairing to work, it’s going to limit the number of battery charges, the life of the tool, or both.

This is likely because there are some “smart” tools…some “smart” batteries….some with both. Remove some of these safeties, and the tool just might not shut down when it draws too much heat from the pack….or vice versa.

All right, let’s take a look at another issue.

Driving the motor beyond what it is designed to maintain will most likely result in failure. This comes from extreme heat production in the motor and/or pack. Just like the car, there’s an optimal operating range. Yes, we can push the tool and battery beyond what they’re rated for, but not for long and not without consequences.Tool battery adapters largely ignore the lines that govern safe use of a tool.

Try flooring the gas pedal in your car. See how long it takes for your temperature gauge to rise and idiot lights to illuminate. The same thing goes for these voltage boosters. You’re just telling the tool to push the gas pedal farther. Just like the battery adapter, you’ve bypassed the electronic communications to do so. Your car is most likely going to shut itself down before permanent damage occurs, and your cordless tool does the same.

Unfortunately, when you bypassed it with a battery adapter or voltage converter, you likely took away its ability to protect itself. In both cases, all of the built-in protection that keeps both the tool and the battery from going so far that it damages itself is gone. What’s more—if a lithium-ion battery is “dumb” because the tool is smart, then putting it on a “dumb” tool means you can now drain the pack down below its nominal level. Now you’ve created a potential “brick” pack that can no longer take a charge.

Nobody enjoys either a dead battery or a burned-up tool.

Believe it or not, manufacturers actually care about how you use their tools and batteries. Bounce that drill off a roof onto concrete and you’re unlikely to get it serviced under the warranty. Using a tool with third-party battery adapters can have a similar effect. Manufacturers don’t like when you bypass the safety communication protocols built into either their batteries and/or tools. Those electronics exist for a reason.

If a tool cannot communicate properly to a battery pack, you can end up in a situation where it asks for too much power. That can present a problem and run the tool hotter than expected. It can even shorten the lifespan of the tool. While a manufacturer may not know whether or not you used third-party batteries with their product, you still risk voiding a warranty if or when they find out.

Just to cover our bases—yes, we know some battery adapters work without any issues. As an example, the DeWalt DCA1820 battery adapter ($39.99) claims compatibility with most DeWalt 18V tools. It lets you use 20V Max batteries in most of their 18V tools. They do, however, give an amply large list of exceptions—likely for some of the reasons stated above. The adapter also will not work with FlexVolt batteries.

But I’ve Been Doing This with No Issues!

You may already be using third partytool battery adapters with no issues. We’ve certainly done it with cameras (never with much long-term success, mind you). Perhaps you have yet to encounter any issues. Great! I don’t know if I would take that good fortune, however, and use it to promote a use policy for every other tool, person, and situation.

You may simply be playing with fire and doing well so far. Perhaps you have yet to really push the tool beyond its limits. In either case, tool communication and maintaining warranty support remain important pieces of the puzzle that we prefer to keep in place!

Wrapping Up the Case Against Using Tool Battery Adapters

Look, I know that you’re searching for a more affordable way to get tools in your hands. If you really want to be cheap, do it with a $40 Harbor Freight impact driver, not a top-of-the-line drill that at some point you paid good money for. Using third-party tool battery adapters simply presents too many potential issues for us to consider it. Time is money and we want our tools to work every time—letting us get as much work done as possible.

On the other hand, maybe you can replace it by burning it up in a YouTube video and monetizing it with ads… after all, what could possibly go wrong?