A Samsung Galaxy S22 Ultra vs. Google Pixel 6 Pro comparison is just what you need if you're trying to figure out which is the best Android phone money can buy. And price is a key component in this face-off, as the Galaxy S22 Ultra costs $300 more than Google's flagship.

In our Samsung Galaxy S22 Ultra review, we praised Samsung's big-screen $1,199 phone for its built-in S Pen, extremely bright 6.8-inch display and much improved cameras (especially in low light). But as you'll see in our Google Pixel 6 Pro review, Google's $899 handset is an awesome choice, as it delivers a great 6.7-inch display of its own along with a powerful new Tensor chip and stellar cameras.

In terms of design, the Galaxy S22 Ultra is the sleeker and more minimalist of the two handsets with a camera array that's nearly flush with the back of the handset. I also prefer the matte finish of the S22 Ultra to the shinier glass back of the Pixel 6 Pro, as the latter picks up fingerprints more quickly.

Then again, the Pixel 6 Pro has more of a personality with its two-tone design and prominent camera bar that goes across the top third of the phone. There's three color options with Stormy Black, Cloudy White and Sorta Sunny. The Galaxy S22 Ultra comes in Black, White, Green and Burgundy, with more color options through Samsung.com.

The Samsung Galaxy S22 Ultra's display is simply the best we've tested yet, and it starts with a 6.8-inch OLED panel that can scale up to 120Hz and all the way back down to 1Hz, depending on your on-screen activity. The Pixel 6 Pro's OLED screen scales down to 10Hz, so its range isn't as wide as the S22 Ultra's.

The Galaxy S22 Ultra's screen wins in other categories, too, including color reproduction and color accuracy. It generated 137.5% and 97.4% of the sRGB and DCI-P3 color spaces in our testing, compared to 104.2% and 73.% for the Pixel 6 Pro.

On the Delta-E color accuracy test, where 0 is a perfect score, the Galaxy S22 Ultra notched a 0.25, while the Pixel 6 Pro registered a slightly worse 0.3.

The Galaxy S22 Ultra features a 108MP main camera, 12MP ultrawide shooter and a pair of 10MP telephoto lenses, one with a 3x optical telephoto zoom and the other featuring a 10x optical zoom. The main wide camera now uses a larger 2.4-micron sensor than the Galaxy S21 Ultra, letting in more light than before.

We took a wide range of images with both the Galaxy S22 Ultra and Pixel 6 Pro, finding that the two phones excel in different areas.

In this close-up shot of chrysanthemum flowers, I give the edge to the Pixel 6 Pro, as it offers better details in the yellow petals, and the flower on the left has a more accurate magenta hue. The S22 Ultra turned it more pink.

The Galaxy S22 Ultra delivers a better-looking landscape image here with this shot of trees at a nearby park. The photo is brighter and offers more contrast, while the Pixel 6 Pro's image looks more dim and flat. 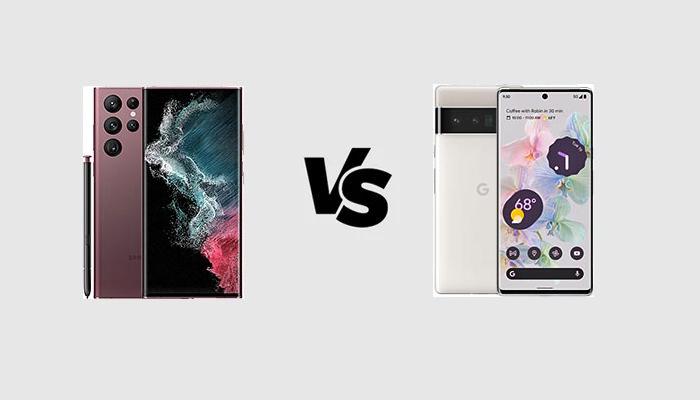 The Galaxy S22 Ultra falls behind the Pixel 6 Pro when taking this portrait in bright sunlight. My face gets blown out, although my black and gray shirt and jeans look crisp against the background. The Pixel 6 Pro's image gives my face a warmer and more natural skin tone.

This food shot comparison is not an easy call. I like that the Galaxy S22 Ultra makes the tomatoes with goat cheese, nuts and honey look brighter, but the detail is slightly better on the Pixel 6 Pro image (at least in the foreground).

Turning to Night mode, I took this shot of a bar cart in very low light, and the Pixel 6 Pro produces a brighter image. Everything from the tequila bottle in the center to the glasses to the left and decorations to the right are just more visible.

When using Night mode outside, the two phones were more evenly matched. The S22 Ultra produces more vibrant color in the bricks and bench, and the snow pops more. But the bushes on the left are illuminated more in the Pixel 6 Pro shot.

So what about selfies? The Galaxy S22 Ultra looks on the red side and my daughter says the shot "makes me look 10 years older than I really am," which is a relief. There's a weird effect with the Samsung shot that doesn't seem realistic. The surrounding trees and blue sky also look more vibrant in the Pixel 6 Pro pic.

To test out the zoom on both phones I used 10x and then 20x for this shot of a bird feeder and decoration. In the first image, the S22 Ultra and Pixel 6 Pro are fairly close. The colors look better in the Samsung shot but the birdhouse is in sharper focus on the Pixel.

At 20x the Pixel 6's photo is brighter but it misses some details like the striations in the white fence behind the bird house. It's worth keeping in mind, too, that the Galaxy S22 Ultra can go to 30x zoom or even 100x, though the results can be quite blurry at the latter settings, especially with a tripod.

The Galaxy S22 Ultra and Pixel 6 Pro are both very capable when it comes to recording video. The S22 Ultra can do up to 8K resolution at 24 fps, while the Pixel 6 Pro maxes out at 4K and 60 fps.

I tested out both phones shooting this fountain in midtown Manhattan, and the Galaxy S22 Ultra offers a more versatile zoom in 4K mode. I could get really close to the water, and the zoom mic really picked up the shooting streams.

In terms of video quality, however, I prefer the Pixel 6 Pro's footage for a couple of reasons. For starters, the running water looks crisper in the Pixel's video. And as I pan up to the building you can make out more nuances, like the reflections in the windows. The greenery off to the right when I pan down looks more vibrant, too.

Before we get to the benchmarks, there's an important performance difference right off the bat. The Google Pixel 6 Pro's fingerprint sensor is a lot slower to unlock the device, to the point where there's a noticeable delay. By comparison, the ultrasonic fingerprint reader on the S22 Ultra is very swift and almost instantaneous.

It was a similar story with graphics, as the Galaxy S22 Ultra outpaced the Pixel 6 Pro on the 3DMark Wild Life test. Samsung notched 9,984 and 59.8 frames per second, compared to 6,682 and 40 fps for the Pixel.

However, both phones turned in similar times in our video encoding testing using Adobe Premiere Rush. The S22 Ultra took 47 seconds to transcode a 4K clip to 1080p, only a second in front of the Pixel 6 Pro.

UPDATE: Geekbench has delisted and banned the Galaxy S22 Ultra due to Samsung's cheating in benchmarks. Take the results here with that information in mind.

The Galaxy S22 Ultra has the most obvious special feature with its S Pen, as it lets you take notes, draw and perform various shortcuts. And unlike the Galaxy S21 Ultra, this time around the S Pen is built in as it should be. Plus, the S Pen now offers 30% less latency.

However, the Pixel 6 Pro has several cool features of its own. This includes Magic Eraser in the Photos app, which can erase photo-bombers or unwanted objects from images. The Galaxy S22 Ultra has an object erase tool, but it doesn't work nearly as well.

Google Assistant is smarter on the Pixel 6 Pro, too. For example, it will tell you how long the wait is when you dial an 800 number, and the phone can even wait on hold for you.

It's definitely worth noting that Samsung promises four years of software updates, compared to three years for Google and the Pixel 6 Pro.

Samsung wins this round hands-down, as it offers longer battery life and faster charging. On the Tom's Guide battery test, which involves continuous web surfing at 150 nits of screen brightness, the S22 Ultra lasted 10 hours and 11 minutes in 60Hz display mode and 10:02 in adaptive mode.

Compare that runtime to the Google Pixel 6 Pro, which endured for only 7:46 and 7:43, respectively, despite having the same size battery at 5,000 mAh.

The Galaxy S22 Ultra also benefits from supporting an optional 45W charger, which got the drained Samsung phone to 67% in 30 minutes. The Pixel 6 Pro could muster only 40% with its 30W charger in the same amount of time.

When there's this much of a price difference between two flagship phones, picking a Samsung Galaxy S22 Ultra vs. Google Pixel 6 Pro winner is not an easy call. But overall the Galaxy S22 Ultra wins this face-off because it offers a better display, stronger performance (including a snappier fingerprint reader) and considerably longer battery life along with fast charging.

However, the Google Pixel 6 Pro remains one of the best big phones for the money. And while the Galaxy S22 Ultra takes excellent photos and offers superior zoom power, the Pixel 6 Pro's image quality and computational photography chops are a step above Samsung in some cases.

My overall advice is to get the Samsung Galaxy S22 Ultra if you want the best Android phone period. But if you're looking to save some money, you should be happy with the Pixel 6 Pro.